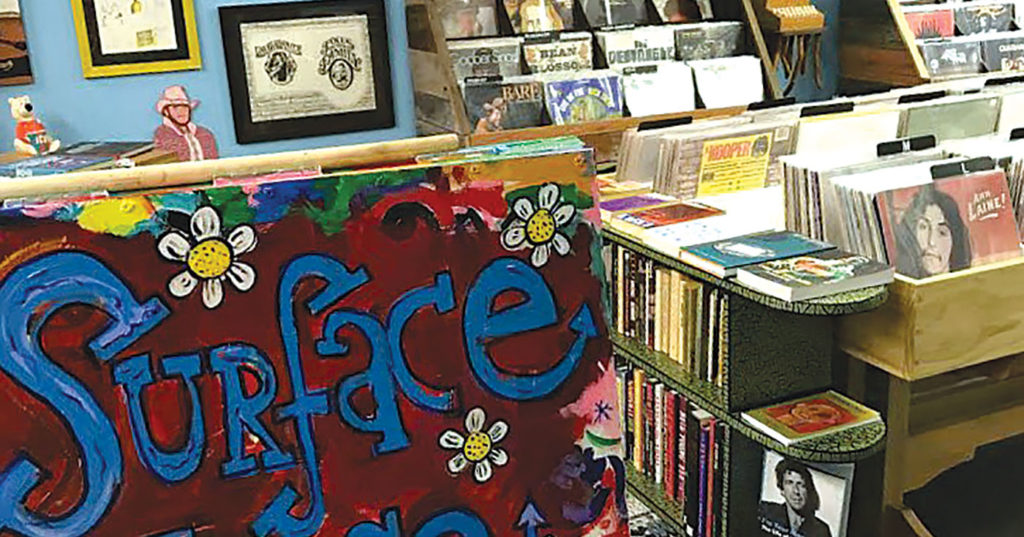 Across the street from Magnetic Tape Recorder Company on Baxter Avenue sits Louisville’s newest record store, Surface Noise, which has now been open for almost two weeks. Owned and operated by Brett Ralph and Bill Barriger — who sold records online and at The Flea Off Market before opening the store — Surface Noise’s aim is to focus on quality over quantity. It has broken its selection into four themed sections: Something Witchy, which is dedicated to sex, death and revolution, featuring punk and post-punk; What is Soul? focusing on jazz, R&B, soul and funk; Tell City, which is home of the “narrative arts” including country, bluegrass, folk and the blues; and Boogie Mountain, which is the place for heavier rock, prog and metal. And everything else falls in the middle. We recently caught up with Ralph and Barriger to talk about Surface Noise.

On focusing on quality over quantity.

Ralph: We have to be discriminating because we have limited floor space. When we get our back rooms ready, we’ll be able to expand. But, even at The Flea Off Market, I felt that my job was kind of to wade through the bullshit for the customer and just present them with good stuff. But, people have told me that they learn about a lot of new records in our store. But, yeah, we count on having high turnaround, so we can have discriminating stock and fair prices that help the product move, so we can keep moving new records out to the floor.

Barriger: Where we do well is per head. Very few people come through and not buy anything — maybe 5 percent. Somebody told me this, and, at first I didn’t really believe them, but now I do: ‘When I see a Kenny Loggins record, I’m done looking.’ But, if they see cool thing, after cool thing, it keeps them looking.

Ralph: Billy and I are both really into punk rock, and post-punk — we grew up in that era. And we were both classic rockers before that. So, I think we’re both really steeped in ‘60s and ‘70s rock and punk-rock and post-punk, but Billy seems really good at finding weird prog and heavy rock records. He also knows more about recent punk rock. I think a big part of it is not watering it down with the standard stuff that you can find everywhere. I guess part of it is we’re just not putting out stuff that we think sucks. I mean, we sell records by bands that I don’t particularly like, that I know a lot of people do, but I think that we’re letting our taste be our guide and reserving room on the floor for stuff that we can really endorse, and speak to, and recommend.

Barriger: We won’t carry most of the big name titles, because you can find them anywhere in town, and it takes up space. And I don’t even know what to charge for that stuff. I would feel guilty charging for an Eagles record. We have a lot of Black Flag for 10 or 15 bucks, that’s cheap. Ramones. Clash. That sort of stuff.

On why they sort records into themes.

Ralph: I really hoped it would create a fun shopping experience — artists bumping up against other artists. It makes sense, for me, to put the singer-songwriters with the country artists. For me, for instance, it’s cool to have Bob Dylan and Joni Mitchell and Neil Young in the same section as the country and folk artists that influenced them, even though they might be seen as rock artists. •

Surface Noise (600 Baxter Ave.) is hosting a Christmas party on Friday, Dec. 9, and on Sunday, Dec. 18, at 5 p.m., Misha Feigin will perform the first in-store concert. Follow the store on Facebook for more details.