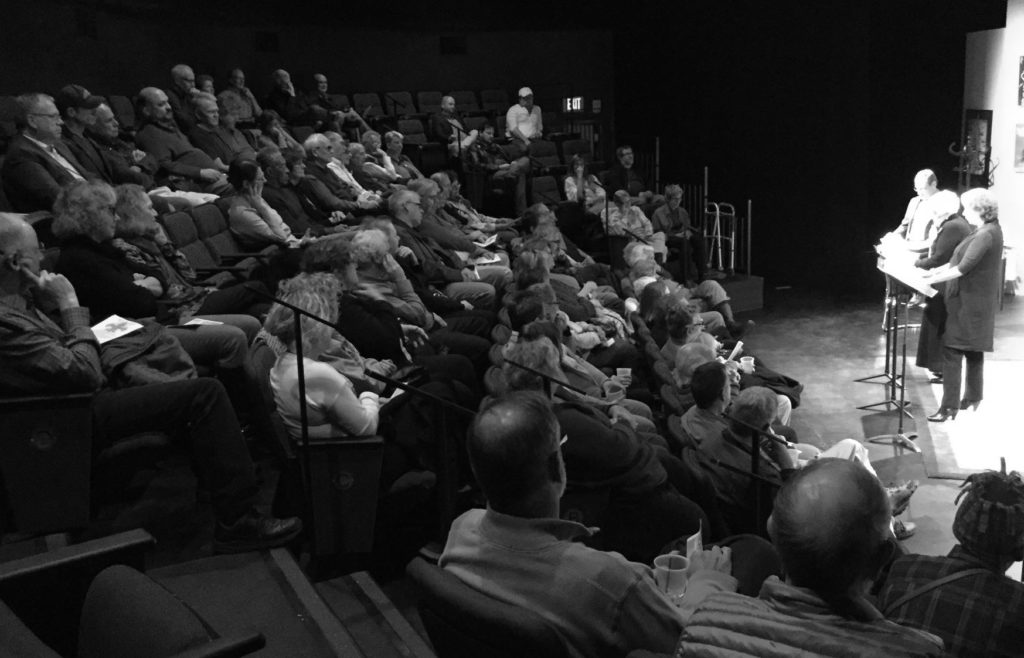 It’s Monday night, and there’s a respectable crowd of 70 people milling about the lobby and finding their seats at The Henry Clay Theatre. Mixed into the crowd of patrons are members of the Louisville theater scene. Here, a couple of people from Looking for Lilith Theatre Company; there, local playwright Larry Muhammad waves to some friends and finds a seat. A couple rows over, there’s another playwright, Brian Walker, reading the program and looking at the beautiful set onstage. That set will be only a backdrop for tonight’s action. The audience isn’t here to see “Mother’s and Sons,” the 2014 play by Terrence McNally that is currently running at The Henry Clay.

No, the audience is here to see something new: a reading of local playwright Nancy Ball Gall-Clayton’s play, “Bernice Sizemore’s 70th Birthday Party.” It’s being presented by Pandora Productions, a company that has brought LGBTQ theater to the stage in Louisville for 22 years. “Bernice” is the first reading in Pandora’s new initiative, Playdates with Pandora, a reading series from local playwrights of plays that address LGBTQ themes.

The actors come onstage. They aren’t in costume, but they’re dressed nicely. They each stand in front of a music stand holding a script. The vocals and emotions of their acting are on full, but there’s no blocking, and they haven’t memorized the play. This is just a reading. It’s a valuable tool in the new play process, and many plays you see fully-produced on stages in Louisville and abroad have had several readings, or even workshops, as the playwrights refine their work.

This evening’s reading focuses on the titular Bernice Sizemore and her estranged son, Evan Sizemore, as they try to reconnect. Nearly a decade earlier, Evan came out, and Bernice stopped talking to him. They are encouraged to reconnect by Carol Sizemore, Bernice’s other child. Evan’s sexuality looms as the great divide between the generations, but there are other hurts bubbling away under the surface, and if Bernice and Evan want to salvage anything from the wreckage of their relationship, they’re going to have to get all their issues out on the table.

“Our community knows what new plays are,” said Brian Walker by phone the next day. Walker’s play, “CPR on the Lost Continent”, will be the second Playdate Pandora offers. It hits the Henry Clay for a one-night-only reading in January. Walker points to Actors Theatre as the reason our community is so accustomed to new plays. “[Our community] knows that new plays are cool, because the Humana Festival is cool, and has been in our community for a really long time.”

While the Humana Festival is an internationally-known place to see new plays — many of which go on to long successful lives around the country — it doesn’t focus on Louisville playwrights. But, in recent years, a handful of independent theater companies have starting focusing more on new plays from local writers. Walker has been a big part of that movement, as the originator of The Finnegan Festival, a festival of new 10-minute plays, and then the cofounder of Derby City Playwrights, a collective that helps local writers develop new work.

Ben Gierhart, the third playwright to be featured in this season’s Playdates, spoke to the continued importance of queer voices in theater, in light of the current fears in the LGBTQ community after the recent election: “I know Pandora was talking before — they were trying to see what their place is in the world, where people can see themselves in other media more readily than before, but having said all that clearly we’re not post anything, and we need these identities shown more than ever before.”

After the reading of “Bernice” concluded, Gall-Clayton addressed the audience: “My biggest question is: The play is about a serious matter, a family relationship that’s been estranged because a child is gay, but I didn’t want to have a totally serious play. I wanted humor. I don’t know if the mix worked.” Often at readings of new plays, the audience and actors are asked to stick around to talk about the play. These talks can be an important tool for playwrights.

But readings aren’t designed to just get feedback from the audience. It’s also about hearing the entire play out loud.

Walker spoke on the importance of hearing the play: “It’s one thing to get some feedback on a couple of pages here or there, like with a roommate or something, but with the actors, they are really there to bring the emotional context to the piece.” A playwright hearing his or her work can understand the arc of the play better. And often actors, who are focused in on their single charter, can make observations, or notice inconsistencies. Of course, good actors also help playwrights like Walker spot other problems. “Hearing actors actually invest emotionally in your roles gives it a different level,” Walker said. “When you have good actors who — everything they say sounds true and sounds real — you know pretty quick if you’ve got some stinker lines on your hands.”

In other words, if it still sounds bad when a good actor reads it, cut that line.

Gierhart’s upcoming play, “The Moon in the Water,” will not only finish out this season of Playdates with Pandora, it also represents another new step for the company — it’s a commissioned play.

A commissioned play means a company asked a playwright to create a new work for them.

Drury, and Pandora audiences, have primarily known Geirhart as an actor. “Well, I adore Ben, he’s acted with us, and assistant directed for me, and I feel like he’s grown up with Pandora,” said Drury.

But while Gierhart was appearing onstage in plays like the musical “Yank!,” he was also starting to write plays: “I had done a lot of acting, and I went to see the Finnegan Festival … and I  thought, I can do this, and it would be fun. And I’m going to do it.”

Geirhart submitted his first play, a 10-minute called “Nightstalker and Canary,” to The Bard’s Town’s new play festival, Tentucky. He was accepted, and submitted to the following year’s Finnegan Festival as well, and was accepted there, too.

He wrote his first full-length play, “Another Man’s Treasure,” for the first year of The Derby City Playwrights, which is where Drury first saw that Geirhart’s talent reached beyond acting.

“I saw ‘Another Man’s Treasure,’ and I thought, ‘he’s a really good playwright,’” said Drury.

He isn’t the only one who was impressed by “Another Man’s Treasure.” It won the Southeastern Theatre Conference’s Charles M. Betchell New Play Contest in 2016.

“I had seen a documentary about aging in the gay community, and how people go into nursing homes and go back in the closet, because no one knows how to deal with them,” said Drury, explaining the inspiration for “Moon in the Water.” “That’s when the seed was planted. I wanted a play about that, because we don’t have plays about that.”

You’ll have to wait till March to hear how Gierhart puts all those ideas together. After the reading, he’ll take his play back to the lab, and work on changes. After that, it’s possible that Pandora will give “Moon in the Water” a full production.

On Monday night, after Gall-Clayton watched her reading, someone from the audience asked if she planned to make any changes based on what she’d heard.

“I’ll go home and make a couple tonight,” she replied.

Aside from some fine tuning, Gall-Clayton is mostly finished writing “Bernice Sizemore’s 70th Birthday Party.” But for Pandora, and the many playwrights in Louisville who are addressing LGBTQ issues and living LGBTQ lives, Monday nights reading represented an exciting new chapter in the Louisville arts scene.

Hear “CPR on the Lost Continent” on Monday, January 16; and The Moon in the Water on Monday March 17.

[Full disclosure: the author is a founding member of the Derby City Playwrights. Gall-Clayton, Gierhart, and Walker have all been members at one time.]