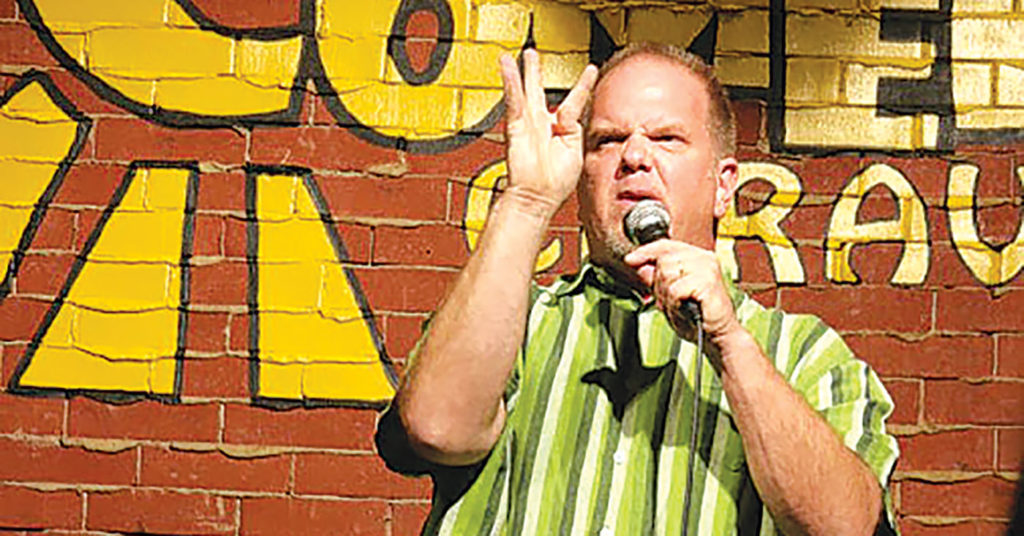 Mike Nilsson has been one of the loudest champions of the Louisville comedy scene for over three decades. He has spent a great deal of his life driving around the United States, playing comedy clubs from coast to coast, as well as in Canada and the Caribbean. Once Nilsson gets in front of an audience his cleverly written jokes often unravel into frenetic improvisational rants. This weekend, in the midst of our collective post-election hangover haze, Nilsson is bringing some of Louisville’s best talent to the stage at The Bard’s Town with “The Dystopian Comedy Show.”

LEO: What made you decide to put ‘The Dystopian Comedy Show’ together?

Mike Nilsson: My old friend and comedian, Jeff Davis, and I have been putting on shows at The Bard’s Town since 2013. We found that if we put them on ourselves, we can book the people we want to see … So we’ve been putting these shows on a few times a year for the last few years, and we try to match them to something that’s relevant to around what’s happening. And when I looked at the calendar and realized it was right after the election, ‘The Dystopian Comedy Show’ was born.

Dystopian is pretty bleak for a post-election show. Do you think things will be that bad?

I was raised in the 1970s, so I always kind of believed we were going to be living in some kind of dystopian future, where mankind would fight for survival, and war over natural resources like food and water. And then came the ‘Mad Max’ movies, which confirmed it — so it was a view of the world I’ve always kind of had in my mind, and if it was ever going to happen, now’s the fuckin’ time. I’m being facetious, of course, but the doom and gloom of this election does kind of make it feel like it’s all about to end, right?

As an American, these two candidates make me sad, but as a comedian do they give you good material?

I try not to be overtly political in my shows. I’ll throw some asides and one liners in here and there, but I feel like when you bring politics into a set, you’re most likely going to lose at least half of the people in the room. Some people are great with it and are educated enough to make it a fair criticism of both sides, like Rich Barber who is on the show — he’s a much better representation of political comedy than I would be.

Are all these comics of similar political persuasion?

I don’t know that in Louisville there are a lot of ultraconservative people in the comedy scene, so in that sense, yes. But there are a few, when I think about it, who are more conservative, but they aren’t on this show.

Was that by design?

Not necessarily. In fact, the lineup for this show has blown up in the past week. After it was announced that they were going to be selling [The] Laughing Derby, I opened this show up to the comedy community as a whole to come out, gather in one place, get some stage time and blow off steam. So it’s going to be unique — maybe a little out of control at some points, but that’s fun, that’s our new world, that’s our new dystopian society.

Making the show free implies a certain sense of inclusion, as well.

Yeah, that’s been my mindset with a lot of the shows at The Bard’s Town — to put comics on stage who I don’t feel like get enough recognition. Of the original six people booked on this show, few, if any, were actually booked at [The] Laughing Derby. These are great comics … So if I have the opportunity to showcase these guys, I will do what I can to do it. Because you have this many talented comics here in Louisville, and just like our chefs, our artists, our performers, our musicians — what we have here is so plentiful that if someone isn’t taking advantage of it, then they’re making a really big mistake.