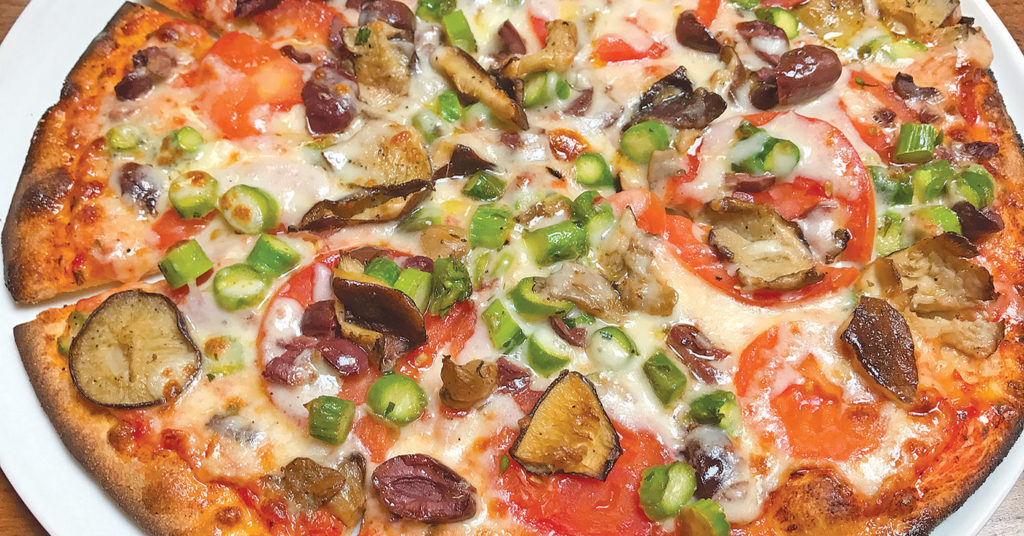 Count ‘em — In the 1980s, fresh in Louisville from his native Iran, by way of Germany, Anoosh brought us Remington’s, a stunning, clubby venue fitted with Frederick Remington statues, offering the city an early glimpse of modern upscale cuisine.

In the 1990s, he put his name on Shariat’s, and it became another popular temple of upscale dining.

Come the ‘00s, and he moved to then-new Slugger Field with elegant Park Place on Main and Browning’s brewpub.

And now it’s the ‘teens, and Anoosh has gifted us with two new eponymous eateries in Brownsboro Center: Anoosh’s Bistro, which dropped into the former Henry’s Place in 2014; and now the more casual Noosh Nosh, which opened this past spring in the same shopping center, close enough to run a cup of sugar over from one kitchen to the other if somebody needs it.

The menu is eclectic and affordable. Other than a short list of “Hearty Plates” that range from $14 (for fish and chips) to $19 (for salmon al forno), just about everything else tops out at $14, and most dishes are $10 or less. About one-third of the options are marked with a tiny carrot icon to signal vegetarian. A few more are vegan, and others gluten-free.

More than 30 small plates, soups and salads are priced from $6 to $10; five pasta entrées from $10 to $14; about a dozen flatbreads and pizzas are $9 to $12, and eight sandwiches are $8 to $14, with fries, if you want them, for two bucks more. There’s full bar service along with coffee, tea and Pepsi-brand soft drinks.

Service is good, as you would expect from Anoosh, although it can tend to hover a bit, occasionally interrupting conversations to inquire whether everything is all right. Yes, everything was fine, from tall tumblers of strong, fresh iced tea, right through to dessert.

We started with a couple of small plates that were beyond excellent, showing Anoosh’s skills at their best in two meat-free items.

Creamy mushroom soup ($7) shows us what mushrooms can aspire to with grace and good works. Even without meat broth to lift its flavors, it was without question as memorable as the iconic mushroom fumê over at Equus. It was rich, luscious in the mouth, intense essence of mushroom flavor elevated by truffle crème fraîche, thick but not floury, with tiny flecks of mushroom to add gentle texture to its silken puree.

Could black bean cakes ($7) possibly reach similar heights? Why, yes! Yes, they could. There was nothing out of the ordinary about their parts, but simple ingredients can reach exceptional heights when they are constructed by a fine chef. Two ample round cakes were creamy and rich within, contained in a delightfully crunchy exterior, gently seasoned so the good black bean flavor could show through. They were prettily plated with gently spicy, fresh salsa verde and a thick aioli enriched with decadent cream … but this cream was vegan, made from raw cashews.

It doesn’t really take away from the appeal of our main dishes to say that they were very good, but they had a hard time living up to the starters.

Short ribs ($16), one of the “Hearty Plates,” presented a generous ration of the biggest beef short ribs I ever saw. Served off the bone, they had been long braised, until they were melting, falling-apart tender and very beefy, but imbued with a somewhat-sweet and winey flavor that may have been kicked up by the tomatoes in the braise. A couple of roasted broccoli florets, halved, roasted brussels sprouts, roasted cauliflower and peeled carrots were surely healthy, but they almost seemed thrown in as afterthoughts, without the creativity that attends most of Anoosh’s dishes.

A veggie pizza ($12) appealed to me with its offbeat selection of toppings: fresh, pencil-thin asparagus cut into 1/4-inch rounds, meaty shiitake mushrooms, earthy, pitted black olives, tomato slices and the more-traditional tomato sauce and creamy mozzarella. I loved the well-made toppings, but was a little disappointed in its paper-thin, cracker-crisp flatbread base; I’ve enjoyed too many great pizzas in Italy and New York City to be satisfied with less-than-quality yeast bread under my pie.

A shared dessert, blackberry cobbler ($7) was as memorable as the starters: The blackberries were just right, tart but not sour, cooked long enough to fall into individual bits like blackberry caviar, baked under a crunchy, old-fashioned cobbler topping above and beneath. A scoop of fine vanilla gelato sat on top, gently melting into the steaming blackberry delight.