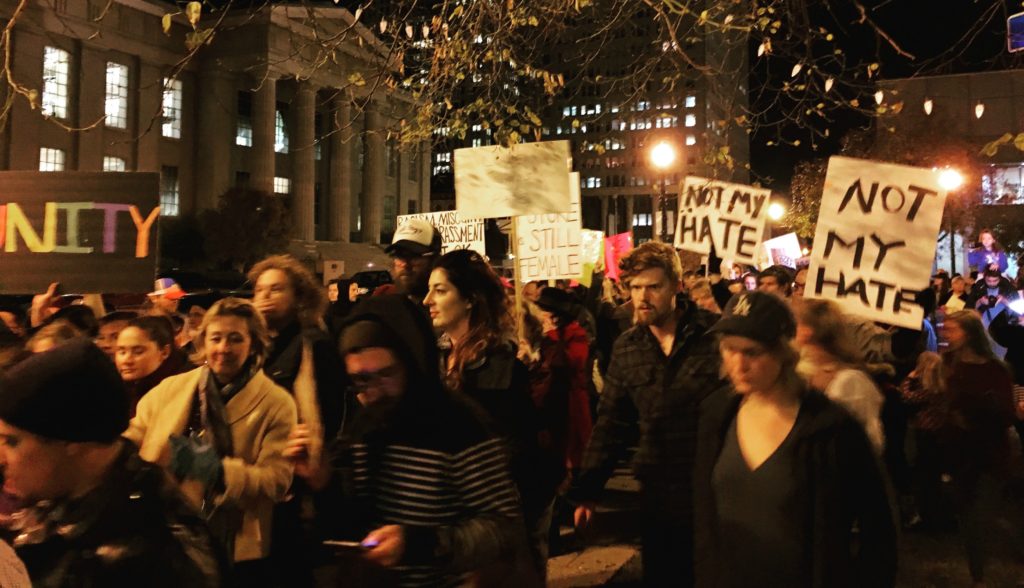 We did a deeply strange thing on Tuesday. Despite all sound logic, the United States of America decided to smash that like button on Donald J. Trump because, presumably, we’ve always been a curious people. Curiosity works both ways. Sometimes it sends us to the moon. Other times, it compels some of the 59 million people who voted for the GOP candidate to open the pod and see what’s inside. For some of the others, they cast a protest vote against a government that forgot about those who never recovered from the Great Recession of the late-2000s (see the Upper Midwest which voted for Obama twice).

For those who find a Trump presidency unpalatable, they gave their response with protests in cities nationwide, a counter to reports of pretty disgusting behavior and reflecting upheaval of the past 48 hours.

Organized as a Facebook event under the title “Not My President,” Louisville’s protest began at the courthouse plaza on the corner of Sixth and Jefferson streets Thursday night at 6:30 p.m. “I’m terrified at the prospect of this man being able to institute, especially with a Republican Congress, all the terrible ideas of his,” said demonstrator Ann Pollard. Asked what she would say to people criticizing the demonstration, considering Trump has not acted upon anything yet as president-elected, she said “I would’ve expected them to give Hillary a chance, so I thought I oughta give him a chance, too. But I think what he needs now is a shot across the bow. He needs to know how we feel out here, we’re not taking it lying down. This is what I’m here to do tonight, to say: We’re not gonna take what we think you’re up to.”

Early in the evening, Mallie Feltner, one of the organizers of the protest, told the crowd: “We will not stand silent in the face of oppression and injustice. Earlier today, I was asked why are you holding this rally, and many times since then too. Like many other people, I woke up Wednesday morning feeling so hopeless, angry, and scared. And there were many people telling me I had to just accept it and move on.”

The protestors responded with a resounding: “No!”

“But acceptance does not mean that I, or you, must be silent. I have witnessed those who … claim that we are whiners and losers,” Feltner said. “For the past eight years, I have witnessed people again and again exhibit disrespect for President Obama. I have seen my senators and congressmen take an unprecedented stance and refuse to fulfill their duties. Our voices tonight are a continuation of a conversation that you began eight years ago. Tonight, you hear our response.”

Another co-organizer, who did not want to be identified, encouraged the crowd to see the election results as an opportunity. “We will fight against all forms of oppression. Let us also be here to commit to further action,” she said from the concrete ledge above the gathering, and speaking through a megaphone. She wore a jean jacket with an emblem reading “A Heart is the Size of a Fist.”

“For those who have never organized before, this is your time,” she said.

This sentiment was echoed by another speaker who also wished not to be identified. “We’re not gonna let him Trump us. We’re gonna make a change. We should be glad he’s in office, because this is gonna give us opportunity and an advantage. Let’s build together,” she said. “We’ll have something to do because this man, when he’s in office, is not gonna do anything but distract. It’s time to organize,” calling on all political allies to join in and ending her speech referencing Kendrick Lamar: “We gon’ be alright.”

The assembly, which made national news via an ABC News video, then began a march down around the Hall of Justice and toward Broadway before snaking north to Fourth Street Live!, cheers reverberating under the former Galleria’s, ahem, glass ceiling. They marched peacefully throughout the central business district and into The West End. Passing cars beeped in solidarity, unsurprising for deeply-blue Jefferson County. Notable was the age diversity of the crowd — a significant amount of children, accompanied by their parents ,as well as adults across the generational spectrum. Chants of “Dump Trump” billowed down the streets, as well as “No Trump, No KKK, no fascist U.S.A.,” the perennially-cheeky “pussy grabs back, and “love trumps hate.” Signs on display represented a grab bag of left and progressive causes, from Black Lives Matter, to pro-Affordable Healthcare Act messages, as well as general calls for unity.

“There’s Going to Be Hell Toupee” was a crowd favorite.

Phyllis Bechtloff came to the march with her daughter Duffy. “We’re protesting the things he said on the campaign. Then, all the sudden he’s like: ‘Let’s try to work together.’ No, two weeks ago you were calling Hillary a criminal, and you want to lock her up and calling her husband a rapist. They aren’t criminals, they’ve not been convicted of a crime. He’s a liar. So give him a chance? He hasn’t apologized for all the terrible things he’s said,” she said. “I’m jolted that Trump was elected president. I’ve watched Hillary my whole life, and she has served this country her whole life, and a man who’s done nothing for his country is elected president and that just doesn’t make sense to me.”

Duffy came with a broader message on why she came to the protest. “To show support for everybody,” she said. “I’m just about some love, peace, and happiness. About people being fair and kind to one another. We’re all the same.”

“I think Trump has appealed to people and incited hatred because he gets attention from it,” Bechtloff said. “He’s incited people to hate. But this [pointing to crowd] is not hate. Most people don’t hate.”

The demonstration saw crowd turnovers — some left early, some arrived late, and carried on into the night for over three hours with no reports of violence or property damage and little visible presence from the Louisville police. Another demonstration is planned for The Highlands along Bardstown Road this evening, as well as a community town hall in Cherokee Park on Saturday.

“May you live in interesting times,” as the Chinese proverb/curse goes, and our nation is certainly in for it the next few years. But, as the streets last night proved, it’s also refueled pockets of people throughout the country.