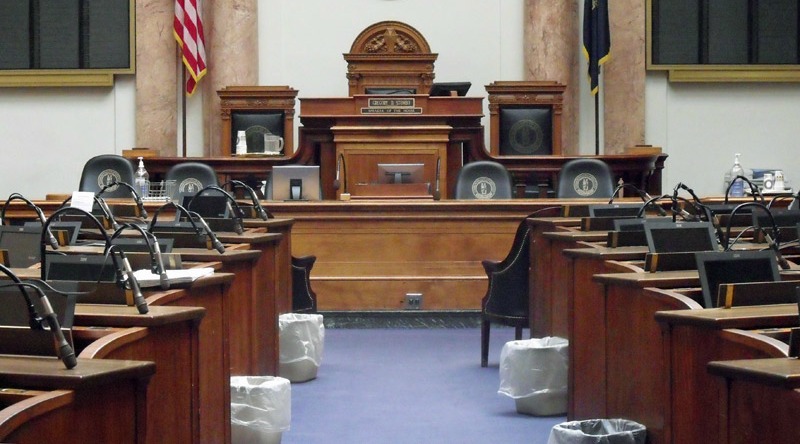 This election is about as settled as a naked butt on a hot stove.

Sure, Kentucky Republicans are confident, and why shouldn’t they be? Barack Obama is in the White House situation room, directing what U.S. Sen. Mitch McConnell luxuriates in calling the War on Coal. Hillary Clinton, who famously promised to “put a lot of coal miners and coal companies out of business,” has her moving van scheduled for arrival at 1600 Pennsylvania Ave.

In addition, Donald Trump offers Kentuckians a chance to vote for a return to the good old days when blacks, women, gays, Latinos, immigrants, environmentalists and other politically-correct miscreants stayed in their respective places.

Kentucky takes to Trump like a sponge takes to water.

On the other hand, control of the Kentucky House of Representatives is narrowly held. Democrats think their four-seat margin just might survive the coming election. Republicans are more optimistic, but not certain they’ll take control of the lower chamber for the first time in about a century. Kentucky is the last state in the South with a chamber controlled by Democrats.

A GOP takeover, if it comes, would look different depending on the margin of the win. A Republican legislative takeover means some of the party’s agenda would pass both chambers and land on the Republican governor’s desk for certain signature. However, barring lopsided GOP control, we’re not likely to see the catastrophe that progressives fear.

One thing is considered certain among panicky progressives: A seizure of the state House by the Grand Old Party (well, it used to be Grand, at times) would instantly produce a checklist of legislation to make the business types, the church people, the good old boys, the polluters, the concealed carriers and assorted other frustrated folks stand and cheer.

So this is why Democrats are begging voters across the state — especially those east of Winchester — to ignore their national ticket and help maintain their party’s fingernail grip. They plead for a chance to check and balance a rampaging Republican governor and the GOP-controlled Senate. They shout their alarums over the shifting dunes of Kentucky’s partisan allegiances. Sadly for them, their pleas are heard mainly in our state’s progressive oases — mainly Jefferson (Louisville) and Fayette (Lexington) counties.

But motor out to the Big Sandy Valley, tune the radio to “WXCC Coal County,” and you’ll hear spots for candidates of both parties — for assorted offices, in Kentucky and West Virginia — pin the “War on Coal” on their opponents. In the 93rd Kentucky House District race, which includes parts of Pike and Martin counties, Hillary and Barack might as well be on the ballot with Democrat Chris Harris and Republican Norma Kirk-McCormick.

Despite all this, the conventional wisdom is that control of the Kentucky House will be a close-run thing Nov. 8.

Democrats, having won three of four special elections last March, still have hope, especially as the Trump national bandwagon has lost its wheels and lurched into the electoral ditch. Salivating Republicans cautiously contend Kentucky voters will give them not just a Trump triumph, but also control of both state legislative chambers.

If they take the House, Republicans would stuff “right to work” and “prevailing wage” down labor’s throat, install every conceivable abortion restriction and dare the U.S. Supreme Court to object, punish “teacher unions” with charter schools, turn principals into bathroom police so every student provably uses the potty appropriate to his or her birth equipment, free the pistol-packers to enjoy what are now gun-free zones, liberate business from oppressive taxes, and, oh yes, empower our dervish of a governor to whirl onto every public campus and blow the governing boards away, to be replaced by appointees more to his liking.

A Republican House run by a Speaker Jeff Hoover, R-Jamestown, might be a bit more reasonable than everybody assumes. (The reflexive left-liberals don’t hear much of this counterargument, down in their pit of fear and loathing.) Hoover is smart (Centre College doesn’t turn out dummies) and not much like his one time running buddy in legislative leadership (former Senate President David Williams…enough said about him).

Sure, we left-leaners have a right to worry.

Maybe the new speaker would be, say, Rep. Robert Benvenuti, R-Lexington, who recently warned a Medicaid Oversight Committee meeting that he’s hearing about lazy oafs who reject work so they can get coverage offered by Medicaid expansion. (“Lazy oafs” is my phrase, not his, but his attitude toward former Gov. Stever Beshear’s Medicaid expansion is skeptical at best.)

A House led by one of the GOP hardliners could unleash almost 100 years of Republican frustration and force the even-tempered and reliably-thoughtful Senate President, Robert Stivers, to slow down a House-led rush to the past.

The House always has been susceptible to mob mentality. It’s where, down through the years, members’ behavior has ranged from the mostly amusing (like sipping bourbon-laced milk on the House floor or packing a pistol in a thigh holster) to the more disturbing (like turning a live fowl loose to protest a “turkey bill,” or earning a sergeant-at-arms escort out of the chamber by refusing to shut up).

Mob mentality makes the House much more fun for journalists to cover than the Senate. Chaos always makes for a good story.

The majority wants to stay a majority

The Senate is smaller than the House (only 38 members, as opposed to 100), as well as quieter and more congenial. Conversation is possible there. And under the guidance of Stivers, the upper chamber has shown a capacity for bipartisanship by passing, for example, a bill to deal with the heroin crisis that met Republican demands for tougher crackdown while accommodating Democrats’ insistence on more treatment and rehabilitation.

In 2015, the Kentucky Senate passed its version of the infamous North Carolina anti-transgender “bathroom bully” legislation by a vote of 27-9. But once SB 76 was rebuffed by the Democratic House, and having heard some poignantly persuasive argument against the bill from across the aisle, the Senate majority didn’t push that proposal again this year.

The rural-dominated Republican Senate also was willing, finally, to approve a proposal offered by a Louisville Democrat, Morgan McGarvey, to resolve the infamous gay marriage license dispute. With Gov. Matt Bevin’s help, this compromise ended the notorious standoff that had earned Rowan County, and the rest of Kentucky, unwanted mention in national headlines and newscasts.

Before you progressives panic, think this through.

A Republican takeover is not like turning Frankfort into the Upside Down World on “Stranger Things.” Nobody is going to find Barb dead.

Keep something important in mind when you are trying to figure out what a Republican-controlled state House would mean. As the aforementioned McGarvey (for whom I work as chief of staff, at no charge) likes to point out, Frankfort is governed by two maxims: The majority wants to stay a majority, and leadership wants to stay in leadership. Running riot with control of both state legislative chambers does not serve that end.

Bevin apparently wants tax reform, as endless numbers of studies (well, at least a dozen of them) have proposed over the last three decades. The GOP’s business constituency would applaud, if reform included tax relief. Democrats want reform too. Among other things, they think the burden of the current system falls too heavily on the poor. A Republican-controlled legislature might very well finally pass reform legislation, with Democratic help. The experts say it could be done without hurting business (a GOP precondition) while raising revenue (a long-time Democratic goal). The Rs and the Ds need each other on this.

Stivers is the key player.

Praised for his role in reopening the state budget to undo an injustice and to make a critically important new research building possible at the University of Kentucky, Stivers said, “I was just doing my job.” That’s the way he sees his responsibility — getting things done. He is a Republican through and through, and a reliable conservative, but he would be unlikely to let a runaway House GOP majority wreak havoc.

Again, what happens after Nov. 8 depends on the margin of House control — Democrat or Republican. A 51-49 Republican House led by the steady Jeff Hoover would be a different animal than a 55-45 House led by a fire-breathing alt-right Republican speaker who believes, say, that poor people will look for any excuse to avoid work and embrace the dole.

Think of this example. If Rep. Denny Butler, R-Southwestern Jefferson County, survives this year’s most emotionally-charged House race, he presumably would follow the leadership of a GOP-run House on most issues. His contest this fall against Democrat McKenzie Cantrell is supercharged because Butler, elected as a Dem, was the last person expected to bolt across the aisle. He did just that, he says, “after a great deal of thought, reflection and prayer.”

Now he’s a Republican. But would he be a reliable GOP vote on every issue? Is Butler really going to join his party’s right-to-work lynch mob? If so, how would he explain that to his labor-heavy district?

When it comes to national elections, the biggety-babble of cocksure commentators on self-important cable TV panels is narcotic. It lulls us into assuming there are easy answers to every political question. But when it comes to the fate of the state House of Representatives after this election, not much is certain.

My point, for you “Game of Thrones” fans, is that Republicans running the state House won’t necessarily be as bad as Ramsey Bolton managing the Seven Kingdoms. •