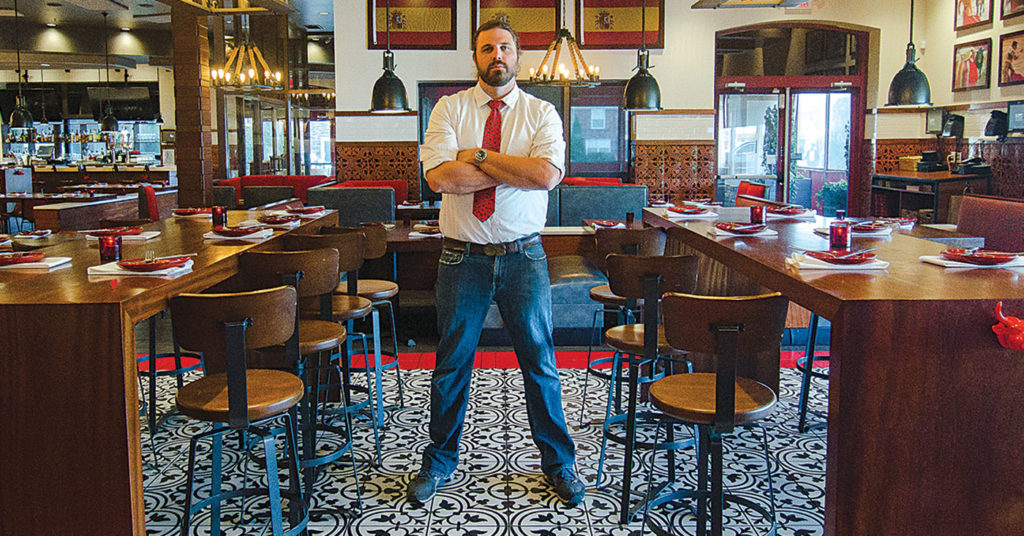 We like good food and drink around here, no doubt about it. And if the restaurant we frequent is locally born and bred, we can get positively giddy. Add another layer of local — like locally-made furniture, lighting and fittings — and we’ve hit the food trifecta.

A growing number of eating establishments in Louisville and Southern Indiana have taken the concept of local all the way to the furniture and lighting, commissioning Louisville’s wealth of fine furniture-makers, sculptors and other artists to make custom pieces.

Next time you go out to eat, look around. It’s about the art that you eat on and under.

Sitting in the 1890 fire station that is his studio workshop, Craig Bayens, 35, is a content man. His company, C. Bayens Furniture + Functional Design (craigbayens.com, 599-9125), figures prominently in the many local Olé Group restaurants. “I opened in seven restaurants this year,” he said. “It’s good.” Owned by chefs Fernando and Yaniel Martinez, the Olé Group includes popular restaurants such as the Mussel & Burger Bar, Taco Luchador Taqueria and Artesano Vino Tapas Y Mas.

He owes his good fortune to his mother, who introduced him to Fernando Martinez about five years ago. “Fernando is the first person to give me a shot,” Bayens said. “I’m very grateful. He took a chance on me and [our businesses have] grown together.”

While an architecture firm did the design concepts for Artesano (artesano-restaurant.com, 708-2196), Bayens added his own touches to the tables, shelving and columns. “I said, ‘I think we can do this better. It’s a Spanish restaurant, so let’s use Spanish mahogany.’ I like to make each restaurant different.” The wood — and the hunger inducing smells — are what you notice when entering the restaurant.

But it is not only his knowledge of woodworking that makes him a good fit. “I’ve been around the restaurant scene my whole life,” he said. “My grandfather and uncles owned Kunz’s at Fourth and Market that closed in 2007.”

Bayens feels strongly about keeping us locally focused. “Why is it important to shop local or use local services? In my case, one can actually see where the money goes. Without all the local restaurant business, my firehouse would just be a dream. The income I earn is being reinvested back into our community and helping to restore a local landmark.”

Her work is hanging in Mellow Mushroom in the Highlands, Mamma’s Mustard Pickles & BBQ in St. Matthews and the Silver Dollar, among others. But she has a special fondness for the lighting in Feast BBQ in New Albany (feastbbq.com, 812-920-0454).

Up until 2010, Van Ham worked in restaurants and became friends with future Feast owner Ryan Rogers. “He was going down this path of opening up his own thing,” she said. “I love working with younger guys, creative dudes doing creative food. They have a better eye for detail and think outside the box for fixtures — and for the food too.”

Her other job is as a spokesperson in the motorcycle industry. Because it’s seasonal, it gives her time to sell her lighting in flea markets and on Etsy. It has quickly developed into a lucrative side business.

“I didn’t grow up in a garage; I wasn’t raised with tools,” said Van Ham. “But I see this thing — I appreciate lighting design and function. I liked making things when I was younger and had an appreciation of art. So I learned from books and YouTube.”

Combining her interests, she is now doing lighting with repurposed motorcycle parts. And what is bound to be popular in Kentucky, fixtures with bourbon bottles.

“I love that I inspire women to make stuff,” Van Ham said. “It’s a confidence builder. I want to support other women that are makers.”

Where do old skateboards go to die? If Jeremy Vessels, 40, is around, they don’t. They’re reincarnated into tables.

Vessels considers himself “an artist making furniture, not a furniture maker.” His influences are designers Charles and Ray Eames, famous proponents of molded plywood, and Haroshi, a Japanese artist who uses recycled skateboard wood as the medium to create his sculpture.

He gets the discarded skateboards from local stores. He cuts the ends off, then glues multiple planks together. The resulting thin lines of stacked multi-colored wood are finished with a high shine gloss.

Lydia House (lydiahouse.us, 718-6002) owner Emily Ruff is a fan. She contacted him about doing a table and bar eating area. She knew he was an artist from Vessels’ frequent visits to the restaurant (he has also done work for Gralehaus).

“I think his work is unique and beautiful,” Ruff said. “Recycled skateboards — I love the idea. He’s my table guy; it adds a lot to the space, and he’s a really good carpenter. We worked together in a nice symbiotic way. Supporting artists is important to me.”

Fried chicken on Sunday after church. It’s a Southern tradition, so much so it’s nicknamed the gospel bird. So if you want to open a restaurant that specializes in the dish as well as other Southern food, what else can you call it but the Gospel Bird (orderthebird.com, 812-725-1054)?

David Metcalf , 38, of Wooden Wire (wooden-wire.com, 415-3200) is an old friend of Gospel Bird’s owner and chef Eric Morris. He asked Metcalf if he wanted to build some furniture for his new restaurant.

“The owner of the building is a contractor, and he did most of [the interior],” said Metcalf. “The renovation was underway. We discussed the theme of the restaurant, and I came in and provided the furniture.”

That conversation led to a commission for 13 tables and a bar top. “The tables have some nice detail, sort of like church wood pews,” he said. “The bar top is of patinated zinc. It looks really old, even after only a year. [For the bar] I married the modern to the traditional with some warm wood.”

Metcalf also worked on the new coffeehouse Bean and was part of the teams that designed Rye on Market, Meta, Eiderdown and the Holy Grale.

Do you know what a live edge is? I didn’t either until I met Billie Bradford, 48, (it means the natural edge of the tree that’s incorporated into the design). It’s a Bradford Fine Furniture (bradfordfinefurniture.com, 718-7175) specialty. “It’s sort of my style, what I’m known for, live edge furniture,” he said.

There are some great examples of his live edge counter tops and benches in McQuixote Books & Coffee. “All of the trim work and cabinets come from the same tree,” Bradford said. “It adds to the fact that it all fits together.” He also worked on the museum space in the Little Loom House and Sunergos Coffee on Preston Street.

LouVino’s Middletown location (louvino.com, 742-1456) is one of his larger commissions.

He created the wine cloud chandeliers in the private dining room, the barn door, and in what he feels are the best examples of his work in the restaurant, the bathroom countertops (those live edges again).

“Chad [Coulter, owner] had his own vision,” said Bradford. “We worked together on the designs … but he was the primary designer.” Coulter preferred to find a local woodworker to build the furniture. “It’s something we like to do if we can. It’s always easier if it’s local.”

The following is a textbook example of serendipity.

Brook F. White Jr., 47, of Flame Run (flamerun.com, 584-5353) designed the glass fixtures in Wild Rita’s Modern Mexican & Tequila Bar (wildritas.com, 584-7482). No, that’s a lie, although they fit beautifully in the space. They were designed for the previous occupant, Mozz Mozzarella Bar & Enoteca.

After the developers saw his work, White was asked to do the designs for Mozz, which took about four months. The commission was for a chandelier, three bowl lamps, two discs and 15 to 20 pendant lamps in yellow, red and orange, either vessel shaped or exploding into tendrils.

The lighting is one of the last items to go in. “That’s what’s fun,” he said, who also did the pendant lights at Wick’s Pizza in New Albany. “It’s a puzzle, you don’t have all the pieces. You have to come up with creative solutions. It’s a fun challenge.”

But the restaurant closed, leaving White to wonder what happened to the lighting. Wild Rita’s came in, redesigning the interior and fortunately, keeping the fixtures. It couldn’t be a better fit, right down to the Wild Rita’s logo of a woman with tendrils of red hair mimicking the lighting.

“When we designed the concept,” Shane Hall, COO of Wild Eggs and Wild Rita’s, said, “we were inspired by the lighting and felt it should come into play with the logo, and boy, did it — right?”

“At one point, I finally did [go to Wild Rita’s]. I had heard they had used [the lighting],” White said. “I’m proud it’s a cool restaurant and they throw my name out from time to time. It’s good exposure, something intangible.” •