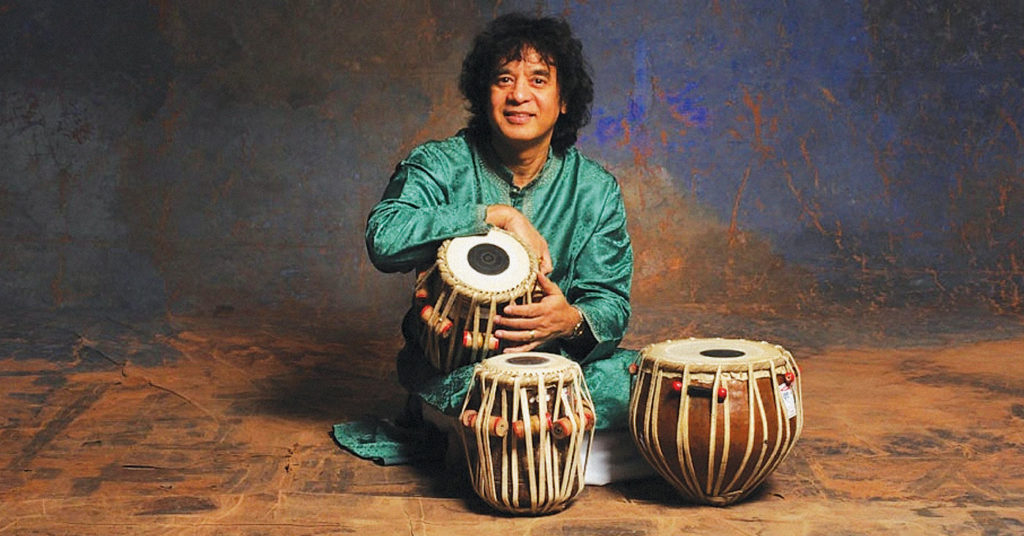 Zakir Hussain is widely recognized as the world’s foremost tabla player. Hussain — who returns to Louisville this week with sitar player Niladri Kumar — has collaborated with many prominent artists in different genres, including the late master of Indian classical music, Ravi Shankar. His work with percussionist Mickey Hart (of the Grateful Dead) spans more than four decades, starting with Hart’s solo debut in 1972, Rolling Thunder, and the delightful and melodic percussion of Diga Rhythm Band (1976). Together, they recorded the 1992 Grammy-winning Planet Drum, the first-ever awarded in the world music category. Each time he has played Louisville, Hussain has been joined by musicians playing different instruments. His first concert, in 2009, introduced many in Louisville to the santoor, something like a hammered dulcimer, played exquisitely by Shivkumar Sharma. He next played here with Béla Fleck and Edgar Meyer, and subsequently with bansuri (bamboo flute) player Rakesh Chaurasia. Additionally, he has performed with legendary jazz musicians — guitarist John McLaughlin in the band Shakti, as well as in saxophonist Charles Lloyd’s Sangam trio. After a warm greeting — “ahh, my friend in Louisville” — Hussain spoke to LEO regarding his forthcoming concert with Kumar, his new project with Mickey Hart and his father’s collaborations with Ravi Shankar.

On his most recent collaboration with Mickey Hart and recording new pieces for an expanded 25th-anniversary edition of Planet Drum.

“It’s been very busy working on a new record. Universal Music has decided to reissue it and wanted to create a buzz about it, and asked us to work up some new material. So we were doing that, and in the process, Mickey and I had the bug bite us, to start an entirely new record, so we are co-producing this new CD. Again, it’s about rhythms and the technology that exists today, and how both exist in the same world at the same time. So we are trying to find new ways to express time, as far as rhythms of the world are concerned.”

On the use of tanpura [drone instrument] in live performances.

“Usually, when you do a classical instrumental concert, there’s usually a duo with a tanpura support in the back. Sadly, these days, due to economic reasons, and not being able to get visas easily for musicians, today’s Indian musicians have become much more tech-oriented in terms of tanpura. Now they carry a traditional Indian tanpura called iPhone. [laughs]. So iPhone now has an app for tanpura, and they plug it into the sound system, so there is a tanpura involved, but in a digital sense. There’s something to be said about the tanpura getting out of tune due to humidity, or air conditioning or traveling or temperature changes, so you end up stopping in the middle of the performance to tune it, and unless you have a tanpura player who is really good at doing that, it becomes a chore, and it disturbs the fluidity of the performance if you have to stop and retune. So, in that sense, this is preferable to the musician performing. I myself am at the center of this thought process. I’m trying to convince the younger musicians to try and play without the tanpura, if they can. As it stands, the tanpura is like a GPS map, a tonal map, a beacon for the instrumentalist, who needs to know where the Sa, or tonic note, is.”

On working with a younger generation of musicians and the “the Ravi Shankar of tomorrow.”

“I started working with the younger generation of Indian classical musicians, with the goal that they needed a platform to have the world look at them, and see how great they are. Niladri Kumar, in the opinion of many of the master musicians today, is the Ravi Shankar of tomorrow. As a young man, he has shown incredible spark and spontaneity and creativity and great musicality, so it was time to take him on the road and show him off.”

On his father, Allah Rakha, working with Ravi Shankar.

“Whenever they played music, the years dropped off them and they became little kids in their best playpen ever. It was a joy to watch that and be a part of that connection they had with their art form. I’ve always wondered, as I get older, if I would have a similar kind of love and affection for my relationship to the music. So far, I am happy that the joy has not faded. I hope it continues, and it probably does, because I get to see these young musicians come out and interact, so there’s no way, playing with these younger musicians, of getting stagnant — there’s always new elements in play, which keeps the excitement up.”