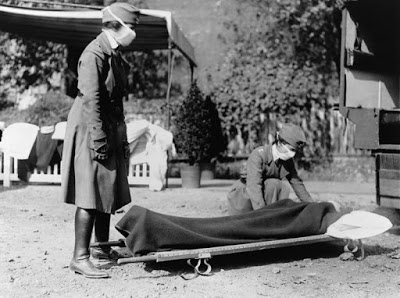 On Oct. 18, 1918, an emergency meeting was held at the Seelbach Hotel concerning the rapid spread of the influenza virus in Louisville. The outbreak, known later as the 1918 Flu Pandemic, would infect nearly 500 million people worldwide and spread quickly around the world aided by the movement of troops involved in WWI. Military installations tended to be hit hardest, and Louisville happened to house the largest World War I Army training camp in North America, Camp Zachary Taylor. Camp Taylor housed over 45,000 enlistees and officers in 1,530 buildings over 3,376 acres.

On Sept. 24, the Louisville Times had reported over 100 soldiers at the camp had caught the flu. By the next day, that number more than doubled, and within a week it had infected 2,100 soldiers. Officers at Camp Taylor enacted measures to protect the city — soldiers were prohibited from entering movie theaters, restaurants and other establishments in Louisville. To enforce this, military police were stationed in strategic locations in town to stop soldiers from having contact with the public, but it was too late. On Oct. 12, the health department reported 2,300 cases in the general population.

By the time members of the state Board of Health, the U. S. Public Health Service, military authorities and Kentucky health officers met at the Seelbach Hotel, the city was in a desperate situation. The Louisville Board of Health reported citizens falling over in the streets across the city. The state Board of Health ordered, effective the next day, all saloons, soda stands and malt shops must close between 6:30 p.m. and 6:30 am. An order closing all churches, schools and places of amusement was also in effect.

The Louisville Times reported that Louisville citizens banded together, volunteering their services. The Women’s Service League and the Louisville Automobile Club worked together in organizing a motor pool to help nurses carry out home visits. Women in particular aided in the effort, donating their automobiles and services to help nurses make an astounding 2,589 house calls by the end of the month. Nurses were working seven days a week trying to stop the epidemic. The Louisville Board of Health reported having to force nurses and volunteers to take breaks and rest as they were pushing themselves too far in trying to keep up with so many infected.

On Nov. 11, The Courier-Journal reported a decline in reported cases. At a second meeting at the Seelbach, it was decided that the citywide ban could be lifted and, by the holidays, the city began to get back to normal. Schools and places of worship reopened, saloons and soda shops too.

Although the toll was great — the Louisville Board of Health reported 6,736 cases of influenza, with 577 deaths between late September and mid-November — it was far less than suffered by other metropolitan areas in the region. Cincinnati, Dayton, and Nashville were hit worse. The U.S. Department of Health and Human Services estimates between 30 and 50 million people worldwide died during the pandemic, making it one of the worst natural disasters in human history, with an estimated 675,000 Americans among the dead.

“This Week In Louisville History”will be a reoccurring, online-only article that runs every Monday, highlighting Louisville people, places, and events that have shaped our city over the last few centuries. John King also writes and edits a world cultural history website called “This Day In Pop Culture.” Suggestions and feedback are encouraged at http://www.thisdayinpopculture.com/p/contact.html