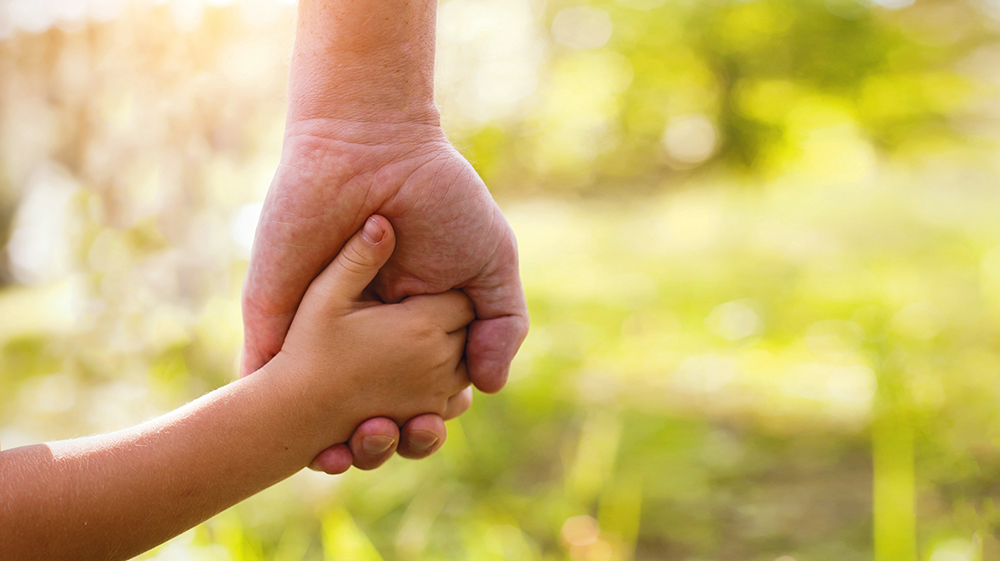 In an October 2015 article on dailytarheel.com, Lindsey Brunson and Nick Niedzwiadek wrote, “While same sex couples have gained the right to marry as part of June’s landmark Supreme Court ruling in Obergefell v. Hodges, state laws can still leave gay couples open to discrimination.” Holning Lau, a UNC law professor who studies sexuality and gender laws, said, “The Supreme Court’s decision in June affirmed a ‘fundamental right to marry,’ but there has never been any such right to adopt a child.”

It is a struggle so many LGBTQ would-be parents are facing every single day and one that hopefully will soon be eased. If marriage was the first step, is adoption the next? What follows are three stories, three different stories of gay men who have taken on the process of adoption and discovered truths about our government and society on their road to parenthood. 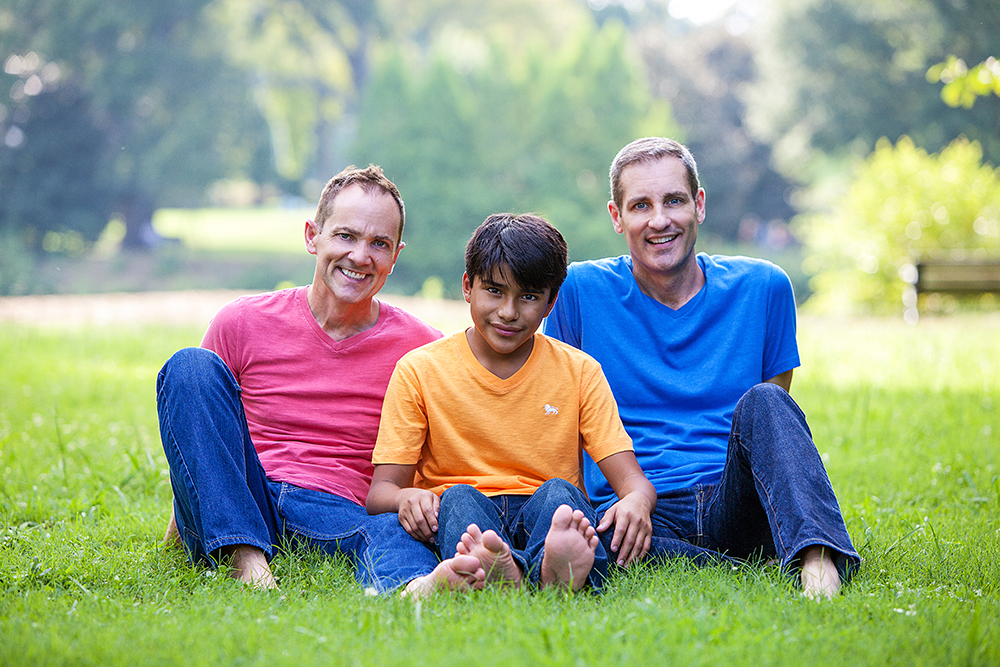 Husbands Jeffrey Roach, 51, and Ken Manford, 54, met when they were youngsters, just beginning to explore life in the ’80s. Ten years into the relationship, their son Jackson came along. He’ll be 15 this fall.

While living in Dallas, they discovered the foster-to-adopt method was not working for them. A Kentucky native, Jeffery explains, “It was all about marketing ourselves. And they told us it would be four to six months, but there were delays, surprises and unexpected costs.”

Ken, “the calmer, saner and more organized” of the two, dove into the Texas community of successful Guatemalan adoption families and was introduced to a married couple that had started an orphanage in the Central American country. The international adoption process for the couple began in January of 2001, but it took 15 months to get their baby home.

Jackson was born in October 2001. Ken and his mom traveled south in January 2002 to get their first look at their son and grandson; both dads returned with Jeffrey’s mom that March. They were allowed to meet the infant – taking him to a suite hotel for prospective families and getting to know him – before heartbreakingly dropping him back off at the orphanage on their way to the airport.

On the third trip, to permanently bring him home, Ken went alone in case of an 11th hour snafu. The government never knew it was a gay couple adopting the child, nor did the judge, who believed it to be a single family adoption. The adoption was completed in short order, after which Ken immediately took his new son to the hotel, called Jeffrey, and said, “I have him.”

Back in Texas, a San Antonio judge validated Jackson’s right to have both of his fathers’ last names, asserting her right to interpret a gray area of the law. A Dallas judge didn’t feel the same way about having Jackson’s name legally changed to add Jeffrey’s last name. When Ken explained to the judge that he had a partner, the judge “picked up the papers and said, ‘Not in my court.’” Fortunately, they accomplished their goal without her.

One last stumbling block: In Fulton County, Georgia, where the family resides now, both gay parents’ names can be on the birth certificate. However, Jackson’s certificate was issued in Texas. Now, Jeffrey and Ken have to wait for the Lone Star State to validate them both as parents on paper.

Fifteen years ago, the men paid $25,000 for the process that made them a family. And though their lives have certainly changed, it’s clear they wouldn’t have it any other way. Instead of at an art gallery opening or a brunch with friends, they were at Jackson’s high school orientation when I called them to set up the interview. Their lives have shifted to revolving around their son’s activities, and their friends are composed typically of the parents of Jackson’s friends.

Jackson calls his fathers “Poppa Ken” and “Daddy Jeffrey,” hence the name of Jeffrey’s book on their journey to be a family: “Pop Daddy.” Their story is available at Barnes & Noble and on Amazon. 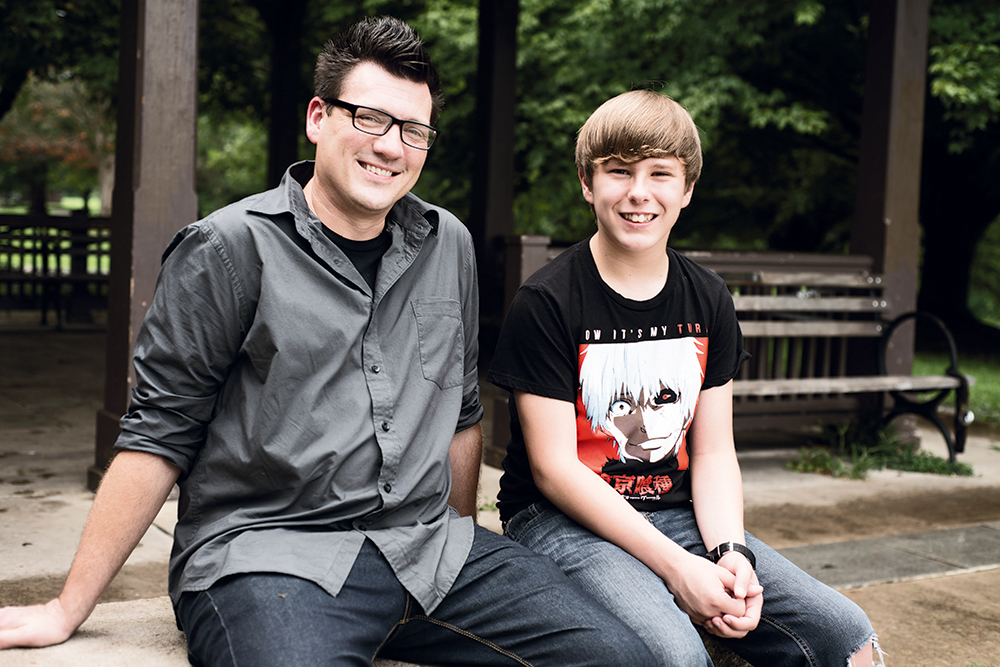 Donald and Paul Taylor live on an urban farm in the South End of Louisville with apple and peach trees, raspberries and more. I begin my conversation with dad Donald with a discussion about chickens. TB: “Do I hear chickens?” DT: “Yes, but if they don’t start laying eggs, they’re soon to be chicken and dumplings.” TB: “That’s terrible!” DT: “Well, at least they enjoyed a good life while they had it!”

That sense of humor has helped Donald Taylor, owner of Stillpoint Wellness and Louisville School of Massage, survive the rigors of a closed local adoption. The outcome has been more than worth the journey: Paul Taylor is Donald’s forever son.

Donald and Paul were together for two and a half years before the adoption was final. The boy was permanently placed with Donald out of St. Joseph Children’s Home (St. Joe’s) in January 2013 at age 11, and he was told by his new dad, “This is where the road of foster care ends for you.”

Prior to that, Paul spent half his life in foster care, facing many challenges as he moved through what Donald called “a broken system.” In most foster adoptions, the legal goal is “Return to Parent.” With Donald and Paul, the goal quickly changed to adoption, with court proceedings to “Terminate Parental Rights,” in August 2014. A guardian ad litem was appointed to ensure that Paul’s rights were honored, and the process was lengthy. Paul had never gotten to that point before.
His adoption was finalized in April 2015, and Paul chose to take Donald’s last name at the same time. As Donald tells the story, they sat before the judge for seven minutes and spent 20 minutes taking pictures. The whole process cost the pair not one cent, and Paul’s state healthcare is still provided.

Asked what would be necessary to fix the overburdened system, Donald replied, “Double the staff. They’re all stretched to the limit. And we need elected officials who will make these children our priority – or they’ll become part of our jail system next.”

I spoke with Paul at a later date and asked how his life is different now. “I don’t get yelled at or hit. My dad doesn’t put up with crap, like me yelling at him or cussing. He didn’t give up on me like the others did before. Now I like to draw, go to Kentucky Kingdom, watch movies … we went to Disney last year and Universal this year.”

The future CIA agent says he feels happy for the first time. “I have a real home now. I didn’t believe in the past that I would have one. And my dad’s a really good guy.” It’s apparent his dad feels the same way about his child. 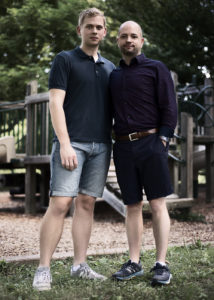 Andrew Newton, 27, works for Louisville Showing Up for Racial Justice – a local branch of a national organazation that mobilizes white people for racial justice movements. Husband Scott Schaftlein, 39, helps clients build their business through technology. They’ve been together seven years, and their current babies are their dogs, Decepticon (“Cepty”) and Megatron (“Meg”). Now, they’re looking for a two-legged addition to their clan.

They always wanted to be dads. In the state’s foster-to-adopt, they experienced more than a year of not being matched, and frustration compelled them to expand to a national domestic adoption. Andrew shares, “The hardest part is dealing with the unknown, knowing you’re doing everything you can to put yourself out there and letting go of control and being grateful for blessings – but it’s a waiting game.”

They found an agency to advocate for them and entered a Yahoo group that sends emails when possible matches come up, explaining the circumstances of the parents, probable cost of adoption and more. Andrew and Scott feel optimistic they will be matched within the next year, costing anywhere between $15,000 and $60,000.
“The majority of fees comes from attorneys,” explains Scott. “This is what happens when you combine adoption with capitalism. Some babies are more expensive than others; white males cost the most.” The adoption specialist will only present their profile to birth mothers who match their preferences, including gender, color, the medical background of the birth mother, the budget they have available to spend and the level of openness they are willing to share in their adoption with the birth mother.

The men don’t care about gender or color, although they would like “the full experience of watching our child grow from day one through his or her life.” And it could be five months to plan or five days’ notice to pick up that child.

It takes a long time to get certified for foster-to-adopt with several processes along the way such as classes, home certification and background checks in every city – the last of which requiring renewal after one year in each and every city. Scott describes an actual “seven-inch stack of paperwork. The most frustrating thing is that so many cities and state governments have no money to digitize, so it’s all snail mail and things getting lost in the mail. It’s been challenging, but we feel like the wind is at our backs.”

Do suburbia and minivans paint the future family portrait? “We’re not sure we’ll go that far,” Scott laughs. Andrew chimes in, “We live downtown now, so we plan to have a more urban child upbringing. And you don’t know anything until the first night taking care of a child that’s completely dependent on you. You just figure it out as you go.”

In a report published by the American Academy of Pediatrics, Benjamin Siegel with co-author Ellen Perrin wrote, “Many studies have demonstrated that children’s well-being is affected much more by their relationships with their parents, their parents’ sense of competence and security, and the presence of social and economic support for the family than by the gender or the sexual orientation of their parents.” It’s hardly shocking news and without question, hope – and possibly a guarantee – that things are soon to change.