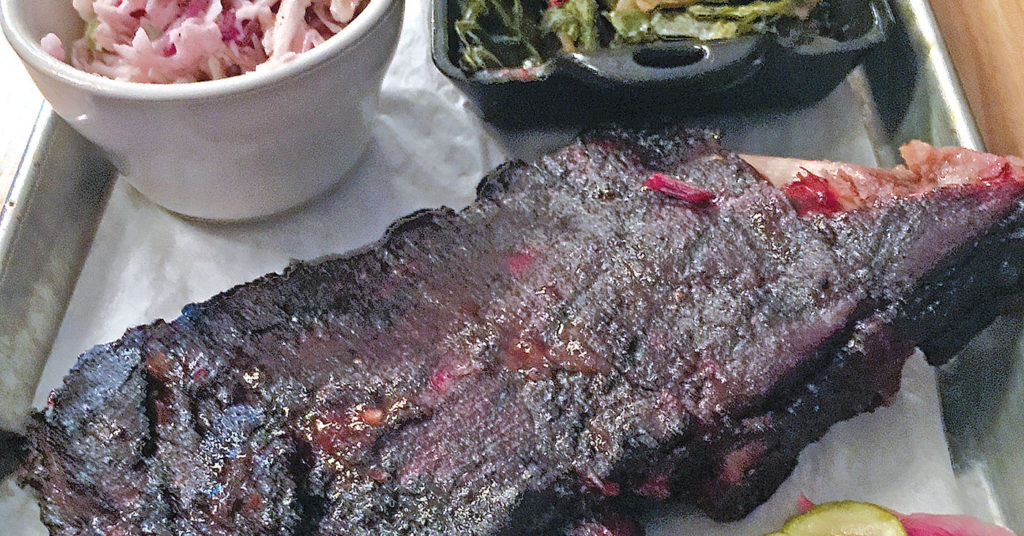 Now and then, I crack that the Martinez family’s Olé Restaurant Group is “The Energizer Bunny of Louisville dining.” All together now, let’s say that again: I’ve just returned from my third review of an Olé Group eatery, and I’m delighted to award Red Barn Kitchen my “Recommended” gold star.

But something about this restaurant is different from all the rest.

Most of Olé’s properties spring fully formed from the creative family’s fecund imagination: Who ever thought of putting mussels and burgers together, until Mussel & Burger Bar came along?

Red Barn, though, can fairly be described as Son of Joe’s Older Than Dirt. It’s a cleaned-up offspring, of course, sporting an MBA and Armani. But even under Olé’s sharp ownership and management, the bones of the 80-year-old beer-and-barbecue joint remain.

I am not calling this a bad thing.

For that matter, just about all the family’s restaurants landed where prior eateries had stood. At Red Barn Kitchen, though — perhaps thinking of Joe’s multi-generational fan base — they refined the prior concept, but left it very much in place. Why tamper with success, after all, other than via a made-over image that is, well, newer than dirt?

The menu looks like a standard barbecue bill of fare with a few offbeat touches, and there’s nothing wrong with that. Starters and salads are $5 to $11, and main dishes range in price from $12 (for a quarter-pound of pulled Berkshire pork or a similar amount of sweet-tea-brined, fried Amish chicken) to a reasonable $22 (for a full pound of peppercorn-rub brisket or cherry-wood smoked beef back ribs, or a Berkshire pork chop wrapped in country ham).

In their “Real Barbecue,” my old Louisville Times colleagues, Vince Staten and Greg Johnson, proposed a simple three-point rating system for barbecue: “Good,” “Real Good” and “As Good as I Ever Ate.” Note well that even the top rating still allows for the possibility that even better barbecue may yet come along.

These ribs were well-smoked, cloaked in a dark smoky black-seared crust with hints of both bourbon sweet and peppery dry-rub heat, with the telltale red ring just under the crust that reflects long, slow smoking. The meat was juicy and tender, but stopped well short of “falling off the bone,” which is good, because serious pit folks do not consider that a compliment.

Squeeze bottles of decent regional-style vinegar, mustard- and tomato-based sauces are available, but not really needed, as the ribs are fine au naturel.

Sides and small plates were good, although secondary players to the barbecue stars, as it should be in a barbecue joint.

Cornbread of the day ($5), for example (amusingly labeled as C.O.D., even though there’s nothing fishy about it), was an excellent, oversize muffin-shaped loaf big enough to serve as a substantial starter. Crisp and crusty on the outside, cakey within, it was nicely flavored and hardly needed the accompanying whipped butter and honey. I wasn’t able to detect the red pepper flavor du jour, but I didn’t care because cornbread and because hungry.

The coleslaw ($5) was made with shredded red and white cabbage and a fine ration of “Alabama white sauce,” a spicy mayo-and-vinegar concoction that’s popular in Northern Alabama. A smoked, house, wedge salad ($10) was pretty fancy, with even the blue cheese bearing a hint of smoke, with pleasant touches of corn niblets and tomato dice, avocado, crisp applewood-smoked bacon and unexpectedly spicy jalapeño ranch.

RBK grits ($6) were hearty and rich. A small black-iron crock was loaded with plenty of pimento cheese and a homeopathic whiff of horseradish.

Grilled corn on the cob ($5) appeared identical to the elotes at Mussel & Burger Bar, and I didn’t mind that at one bit, as I love this Mexico City street food. It is gringo-ized in name and description here, “coated with Duke’s mayo, Parmesan cheese and chili powder,” but it’s the same damn thing, and I am happy about that.

Only a side of braised greens ($6) was disappointing, a mix of surprisingly tough kale and collards with a startling sweet flavoring that almost tipped them into the dessert category, and a level of heat that would merit a four-pepper symbol in a Thai or Indian place.

The real dessert, however, was a triumph. Kudos to the pastry chef for a slab of coconut cream cake ($9) that might have been even better than Grandmother used to make. Rich and moist, with a good crumb and pleasant, but subtle, coconut flavor, it was laced with toasted coconut, thickly iced with rich coconut pastry cream, and served with two delicious spheres of tart-sweet lemon-buttermilk ice cream.

With a pint of lightly malty West Sixth Oktoberfest and fresh, clean iced tea, dinner for two came to a fair $62.45, plus a $15 tip for excellent service from Suzanne and her team.