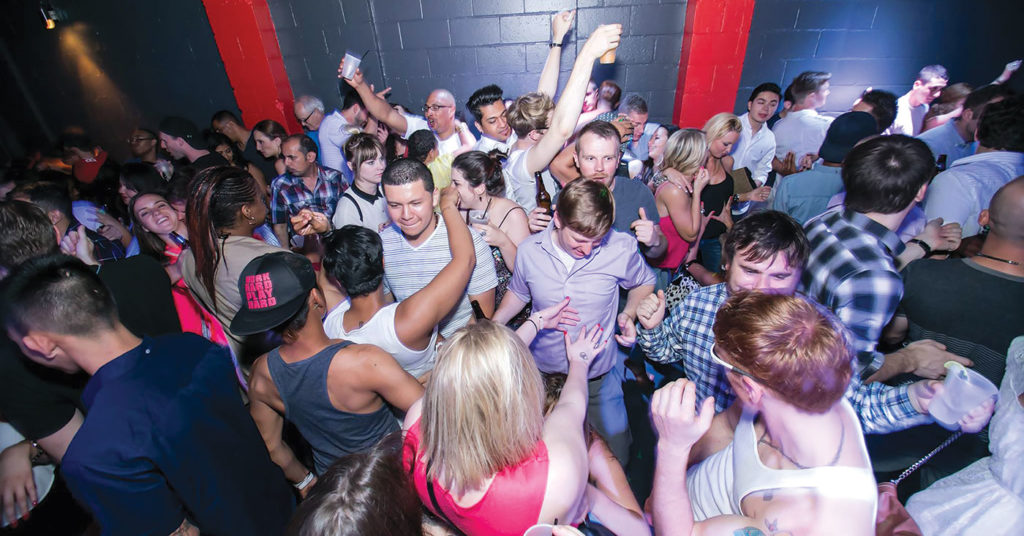 Best Bar
RecBar
A new kid on the block, Recbar opened in April, offering pub food, video games and an expansive bar list. With more than 40 arcade games and 10 pinball machines — priced at a quarter each — Recbar has the Ninja Turtles four-player side-scroller, Street Fighter, Crazy Taxi and many others, all in a large, relaxed atmosphere in Jeffersontown. —Scott Recker
#2. The Back Door
#3. Nachbar

Best Club DJ
GlittertitzDJZ
My first exposure to GlitterTitzDjz was a weird one. I was at a folk concert at Zanzabar, and when it ended, I went out to the patio for a little bit, and I came back in to find the lights were dimmed, laser lights were flashing around and GlitterTitzDjz was blasting out some sort of combination of high-speed techno and top-40 bangers. Within 10 minutes, it was like stepping into a parallel universe, and the mood inside totally changed. It was strange. It was also kind of awesome. —Scott Recker
#2. Sam Sneed
#3. Derby City DJ’s

Best Dive Bar
The Back Door
The Back Door is a time-honored Louisville tradition for its cheap drinks, its regulars, the bar staff and an undeniable everybody’s-welcome atmosphere. Of course, Readers’ Choice voters may well have been swayed also by the bar grub, from egg sandwiches to the chili to the wings. If that doesn’t suit you, grab a booth (if you get there early) and just wait for Rusty the Jerky Man to come along with his legendary basket of snacks. And hey, once in a while people also enjoy a game of pool at the Back Door. Or so we’ve heard.
—Kevin Gibson
#2. Mag Bar
#3. Nachbar

Best Gay Bar
Play Louisville
My love of drag started with the show “RuPaul’s Drag Race,” and it blossomed thanks to Play. It’s a magical place where the men can dress like women, the women can dress like men, and everyone is welcome to be whatever and have a good time. And with drag shows every weekend (with plenty of appearances by Drag Race Royalty), there is always a good performance to see. So go for the shows, stay for the dance party, and don’t forget to Play nice people.
—Ethan Smith
#2. Nowhere Bar
#3. Big Bar

Best Happy Hour
The Hub Louisville
The Hub Louisville took home Louisville’s best new bar/club title, and that award is certainly appropriate, thanks, in part, to its stellar happy hour. Tuesday through Friday from 4-6:30 p.m., make sure to pop over to Frankfort Avenue to enjoy $5 craft cocktails, including an Old Fashioned and a Negroni, among others, and a special $5 cocktail of the day, such as the delight I enjoyed a few weeks back: the ELeven — vodka, fresh lime, Giffard Pamplemousse Rose and muddled strawberry. Happy hour goes beyond the bar, too, as all its happy-hour menu items are $5, including chicken sliders, black eyed pea cakes, soy hoisin tartar and more. Drop $20 (plus tip) on a weeknight, and leave with a buzz and a full belly. —Kelsey Westbrook
#2. Napa River Grill
#3. Dragon King’s Daughter

Best Karaoke
Akiko’s
I’m still not entirely convinced Akikos is a completely real place. I mean, it exists, but like the Cave of Wonders in Aladdin, it probably only pops out of the night under certain circumstances. In this case, it’s having more than five drinks, which magnetizes you to that back room, where slurred Talking Heads, Brittany Spears and more gems fill the room. —Scott Recker
#2. T. Eddy’s Bar and Grill
#3. Highland Tap Room

Best Neighborhood Bar/Pub
Nachbar
The first time I went to Nachbar, I sat down to get a drink and was greeted by a tubby cat that wanted to get some pets. Then, I went outside to find everyone in the neighborhood with their dogs. So not only is Nachbar the perfect place to meet your Germantown neighbors, but it’s also the perfect place to introduce your dog to your neighbors. —Ethan Smith
#2. Recbar
#3. Shenanigans Irish Grille

Best New Bar/Club
The Hub Louisville
The Hub Louisville was a welcomed addition to Frankfort Avenue, as Louisville’s “best new bar/club,” bringing refined pub fare and craft cocktails together in an industrial, yet quite comfortable ambiance. Its patio includes a long fire pit, stadium-style seating and a bar facing the bustling sidewalks of Clifton, yet the best feature might be the rotating cocktail menu, on which you will find various specials throughout the week and on certain event occasions (UofL games, etc.). Give me an Aperol Spritz with the Veggie Nachos on that patio, and I’m one happy girl. —Kelsey Westbrook
#2. HopCat Louisville
#3. The Pearl of Germantown

Best Place to Dance
Play Louisville
The first thing to know about Play is it has the best drag shows in Louisville. So good, that it’s impossible not to get amped up by the performances and want to strut your stuff on the dance floor. Which is why, as soon as the shows are over, everyone sashays to the dance floor for the best boogie down in the city. —Ethan Smith
#2. Nowhere Bar
#3. Zanzabar

Best Place to Find a Date
Nowhere Bar
Well, I haven’t actually found a date here, but I know why: Nowhere has amazing drinks and drink special and great shows and DJs. If it’s a late night of dancing, or a chill night out playing pool or hanging on the patio that overlooks Bardstown Road, Nowhere Bar is somewhere for you. (And speaking of somewhere, head to Somewhere restaurant, right next to Nowhere, the next morning for brunch, lunch or dinner with your new date. It’s affordable, upscale cuisine in a relaxed, but stylish environment.) —Aaron Yarmuth
#2. Zanzabar
#3. Play Louisville

Best Place to Shoot Pool
Diamond Pub & Billiards
The name says all you need to know about this Readers’ Choice winner. It is half pub and half billiards mecca (and its food is pretty damn good, too). So grab a bite, grab a drink and shoot some pool while you wait for your team to come on one of the many big screens. —Ethan Smith
#2. The Back Door
#3. Barret Bar

Best Sports Bar
Buffalo Wild Wings
Sure, give most of your dollars to local bars and restaurants. I get that. But, if you’re looking for sports on dozens of TVs, cheap booze and greasy food — especially during NFL season — this is your change-of-pace. With the variety of sports fans cheering for franchises from coast to coast, it’s a great way to watch your favorite team and not look out of place when you get visibly pissed off after they lose by a last minute field goal. —Scott Recker
#2. Recbar
#3. Diamond Pub & Billiards

Best Strip Club
PT’s Showclub
Downtown was once full of strip clubs. Little Eli often stared at them through the windows of his parents’ burgundy Astro, wondering what boobies looked like in real life. Years later, when I first stepped into PT’s, I wasn’t disappointed. Brandi was a chemistry major working her way through school, and, as the years roll by, I often imagine Brandi’s successful career in STEM, and I hope that wherever she is, she knows she made a lot of nights very special for a lot of lonely guys who needed to see some breasts. PT’s was and is the best strip club in Louisville. —Eli Keel
#2. Trixie’s Entertainment Complex
#3. The Godfather

Best Trivia Night
Drake’s
Do you know how long it takes for Neptune to go around the sun? Which president coined the term “The White House”? Who are the only two actors to win Academy Awards for playing the same role? If you know the answers to these questions, then you are undeniably a giant nerd — and you should probably close that book and get down to one of the two Drake’s locations (3939 Shelbyville Road or 3921 Summit Plaza Drive) on Sunday and Monday nights at 8 p.m. You can actually apply all of that useless knowledge, while managing to be somewhat social (this is supposed to be a group activity, weirdo). It’s free to play, the hosts are full of witty banter and teams try to out-do one another with the most over-the-top team names. —Brent Owen
#2. Molly Malone’s Irish Pub
#3. Zanzabar