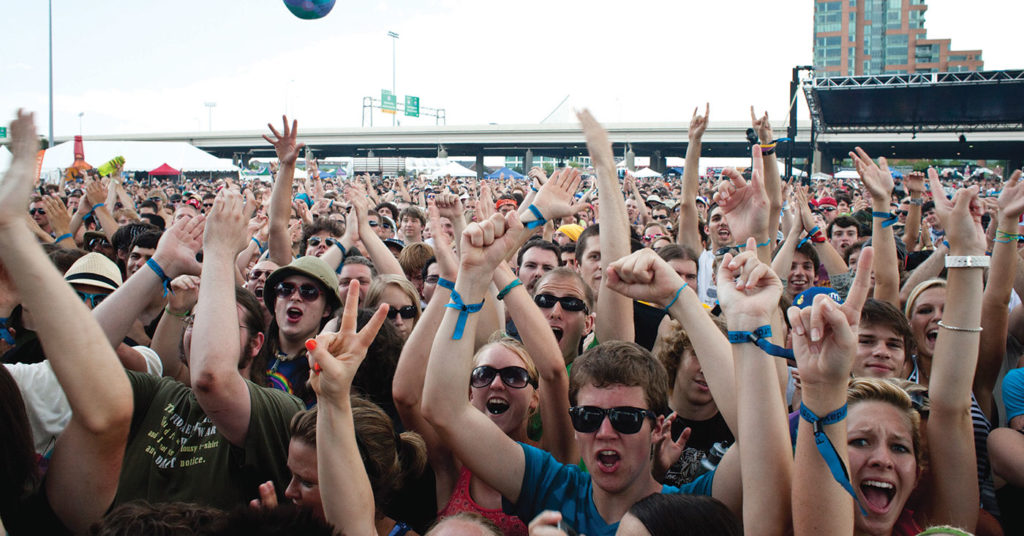 Best Festival
Forecastle Festival
Whether you love, loath or don’t care about the bands playing Forecastle, it’s a tough event not to respect — the way it has developed into a premier national festival, bringing a major event downtown. And from featuring such reunions as Slint and The Replacements to booking such bumble-gum favorites as Sam Smith and the Avett Brothers, Forecastle grabs names that makes it a top-notch festival in a highly-competitive circuit. —Scott Recker
#2. Kentucky Derby Festival
#3. Louder Than Life

Best Art Gallery
Tim Faulkner Gallery
There are two terrific reasons why the Tim Faulkner Gallery won best art gallery: founder Tim Faulkner and gallery director Margaret Archambault. And I can add a third reason too: Portland. The gallery’s move to the Portland warehouse district (it was in NuLu and Butchertown) has given them room to materialize a lot of dreams. To call their space mixed-use is an understatement and a disservice to Faulkner and Archambault. It’s an “Art with a capital A” space with visual art at its core.
—Jo Anne Triplett
#2. Revelry Boutique Gallery
#3. Swanson Contemporary

Best Live Music Venue
Headliners Music Hall
A mid-size room like Headliners has always been my favorite place to see a concert — there are enough people there to make the room feel alive, but not too many where you either have to fight your way to a vantage point, or, worse, watch everything from a Jumbotron. But, having the right-size venue isn’t the thing that makes Headliners special — it has smart people booking great shows, a bar that has reasonably-priced drinks and a chameleon-like environment, where reserved seating and rowdy pits both seem to make sense. —Scott Recker
#2. Louisville Palace
#3. Mercury Ballroom

Best Live Theater Venue
Kentucky Center for the Performing Arts
Back in the mid-’80s, downtown was in bad shape and needed a shot in the arm to bring it back to life. Somebody was smart enough to build the Kentucky Center. Now downtown is bustling and thriving. Coincidence? Hell no. Art makes a city, fool. Whatever you think of when you picture the center — big budget Broadway touring shows, the Louisville Ballet, Stage One, a half dozen smaller theater companies, community outreach, free workshops — I guarantee there is a bunch of stuff you don’t know about. Do yourself a favor and go explore. —Eli Keel
#2. Louisville Palace
#3. Actors Theatre

Best Local Comedian
Amiri King
For the second year in a row Amiri King has been voted LEO Reader’s Choice Best Local Comedian. Unlike most previous winners of this award, King traded the stage in for a YouTube channel. With over 100 million views and a quarter of a million subscribers, he has a viral platform which makes his voice significantly louder than that of most local comedians. King has made nearly 200 hysterical videos, which range anywhere from big-production clips to hot-button rants on politics, society and pretty much anything else that climbs into his craw while he has a camera in his hand.
—Brent Owen
#2. Tom Mabe
#3. Chris McConnell

Best Local Band/Musician
Kudmani
Listed on their website as a family-friendly wedding reception band, Kudmani is a family-friendly wedding reception band. I am able to confirm that they play “Don’t Stop Believing,” “Uptown Funk” and “Wagon Wheel.” I am not able to confirm whether they play “Thrilller,” “Genie In A Bottle” or the song where everyone acts like a chicken. Either way, I’m sure they’ve brought many fantastic drunken dance moves and, possibly, a few oopsie babies into the world. —Scott Recker
#2. The Louisville Crashers
#3. Petar Mandic

Best Museum
Speed Art Museum
This is the Speed Art Museum’s year. After reopening in March after a three-plus-year renovation, the museum continues to showcase its beautiful new glass box. The building, with its proposed LEED (super environmentally-friendly) certification, has become a destination. As important, the permanent collections housed within are displayed as the prized objects they are. Large works, once stored because there wasn’t room in the old museum, are now seeing daylight again. Special exhibitions and the Speed Cinema continue to introduce viewers to new works. What a comeback — it’s a gift that keeps on giving. —Jo Anne Triplett
#2. Kentucky Science Center
#3. Kentucky Derby Museum

Best Performing Arts Group
Kentucky Shakespeare
The ongoing renaissance of this company under artistic director Matt Wallace is the biggest story in the Louisville art scene since … I don’t know, maybe forever. After languishing and shrinking for over a decade, the oldest free Shakespeare festival in the country is growing, with an 11-week summer season this year, greatly expanded educational shows and touring, and winter and fall productions as well. I get to see Titus Andronicus this October, in an empty warehouse in Butchertown! I’m so excited I could grind your bones up to make a pie. —Eli Keel
#2. Va Va Vixens
#3. CirqueLouis

Best Theater Production
“Dracula”
Celebrating his 900th birthday, Vlad the Impaler lives on in 2016’s “Dracula.” A Louisville Halloween tradition unlike any other, the can’t-miss show at the Actors Theatre features this classic character. In the beautiful Bingham Theatre, spooky, un-dead characters roam among the audience, while being chased by vampire hunters. While some scream, some hold their breath, and others laugh at the performance. But everyone is engrossed in this awe-inspiring performance. On a single set that sits at the bottom of the theater, completely surrounded by seats, spectators watch the characters travel from Dr. Seward’s study in Carfax Abbey, to a graveyard, Dracula’s ship and the dungeon lair of Dracula for the final battle. The brilliance of the cast and crew maximize all 360-degrees of stage, audience and auditorium, with spectacular lighting, audio and visual special effects, nobody is left out of this mesmerizing experience. —Aaron Yarmuth
#2. Shakespeare in the Park
#3. “Wicked”

Best Visual Artist
Antonio Pantoja
I’m a fan of nice. And while Antonio Pantoja did not win “best nice person,” he should have. After years of receiving awards, he’s still humbled and surprised when he wins Best Visual Artist again. One of the reasons he continues to win is his mastery of the various forms of photography, working across the genres of fine art, commercial work and film/video. Pantoja is proof nice guys do not finish last. —Jo Anne Triplett
#2. Marc Murphy
#3. Julius Friedman