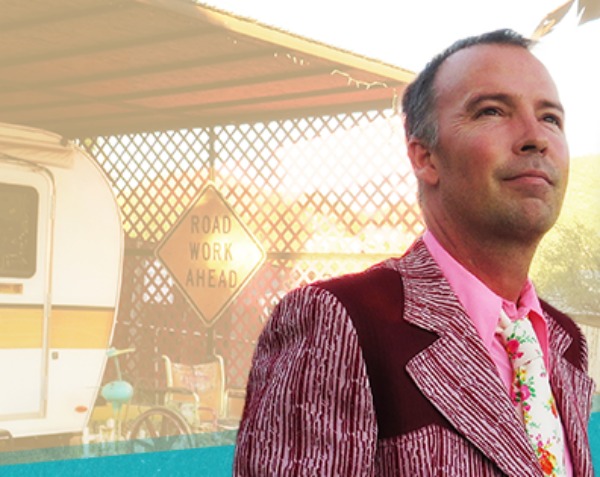 Doug Stanhope has a very particular brand of comedy. After 25 years on the road, Stanhope has built a highly-loyal fan base with his notoriously dark, brash and hilariously-obscene material, often wading through itchy topics like sex, drugs and death. As Stanhope returns to Louisville, I will give you the same advice about going to his show as I would about entering the proverbial House at the End of the Street. And that is: Enter at your own risk.

LEO: I appreciate you taking time to talk with us today.
Doug Stanhope: No problem. It’s perfect timing. We just walked into our shitty Motel 6 hotel room with cigarette burns all over the bed sheets. Right where I belong. Sometimes I wonder when I read Yelp reviews and people complain about shitty conditions, and cigarette burns in the bed, and noisy neighbors, and fucking yelling people  — I wonder how many of those Yelp reviews are about me and my girlfriend.

How do you feel the comedy industry has changed in the 25 years you’ve been doing stand-up?
I came in at the end of the boom, in the early ‘90s, just as the ‘80s boom was dying. So, it was dead for the first 10 years or so. I didn’t care — you could get away with a lot more shit. But that’s changing. They talk about the political correctness thing comics are dealing with now like it’s current — it’s not. That was a ‘90s thing, then it drifted back the other way — it’s all a cycle. For every Jerry Seinfeld and Paul Reiser they spawned Andrew Dice Clay and Sam Kinnison as an alternative. It constantly goes back and forth.

Have audiences become too sensitive?
Maybe, but I haven’t really had to deal with that in years. My audiences know what they’re coming to see. I don’t have to do spots for strangers and tourists anymore. And I’m sure if I brought my act to a normal show in a normal comedy club, there would be a lot of comment cards. I have developed a small but tenacious fan base of miscreants and I don’t know what I could possibly do to offend them at this point — except maybe quit drinking or turn to Jesus.

You have a new memoir “Digging Up Mother: A Love Story.” Why was now the right time for you to tell your story?
We wrote up a treatment of this book and my manager has been trying to sell it since 2009, but no one seemed interested. I was fine with it because that meant I didn’t have to write a book. And then, all of the sudden, my last special ‘Pool Hall Putsch’ came out with the story of my mother’s suicide on it and the publishers were now into it. I was like: ‘Fuck! I have to write a book. I already cashed that check.’

What was the hardest part of writing this book?
My memory. I had to just call so many people from my past to fact check. It took a village to write that book. A lot of calling people. I didn’t particularly want to get in contact with like ex-girlfriends and such. But that was also a lot of fun in regards of people I did get in touch with — like my delinquent friends I hadn’t seen since we were teenagers. There was even one girl I had a tryst with in Chicago who was like: ‘Alright, I’m going to stop you right there — I remember for a fact, you didn’t cum in my ass, you came on my back.’ This is why we fact check.