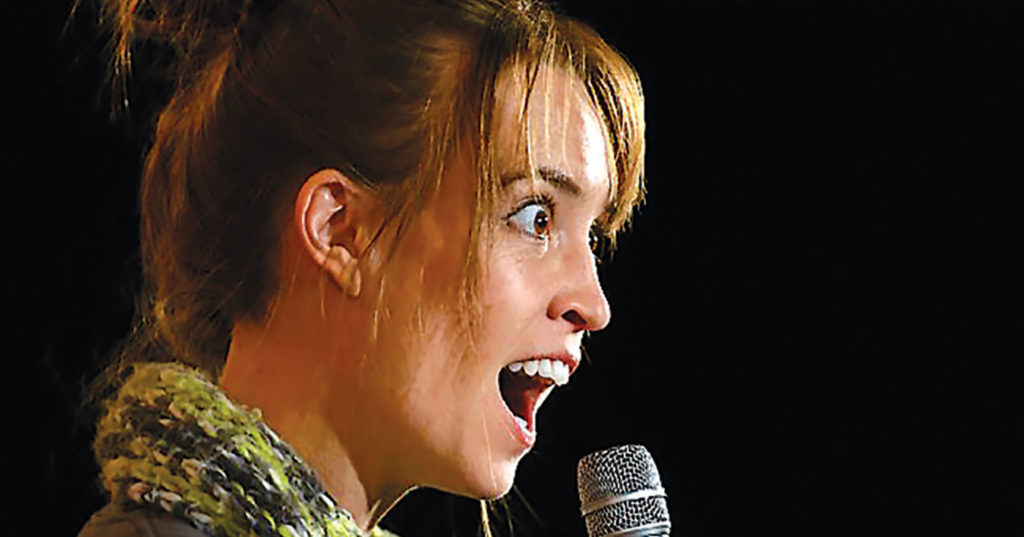 Mary Mack might be one of the most-endearing people in stand-up comedy. Her humor often mixes sweetness, sarcasm and music, rolling it all into a single erratic set that leaves audiences everywhere in tears. Currently, she has put the music portion of her show on the back burner so she can focus on material that will find its way into a book she’s writing. Mack’s infectious, soft-spoken Wisconsin charm has been featured on TV, including on “Conan,” “Last Comic Standing” and “Adult Swim.” She took a few minutes over the course of a drive from Bismarck to her home in Minneapolis to chat with LEO before making her return the stage at The Bard’s Town next week.

LEO: How is your drive going?

Mary Mack: I’m still in North Dakota, and I don’t want to leave. They have a public radio station here called Prairie Public Radio, and I’m totally addicted. They’re playing [the TED Radio Hour], so now my panic attacks are going to go up tenfold, because there are so many ways to die that I didn’t know about. So that’s how it’s going.

You’ve spent a lot of time in Louisville. Is there anything that sticks out about being here?

Yeah, I spent a birthday working at [Comedy Caravan] in Louisville. And it was such a good birthday, because all of the good restaurants on Bardstown Road. I did nothing but eat all day. And I went to, probably, three coffee shops and walked around Cherokee Park. It’s such a fun place in the country to go. Aw, good memories. I’m in my 13th year of touring, and a lot of comics don’t get as excited about seeing these towns that I get to go to. And I think that comes from growing up in a town with one restaurant and nothing like what you all have. When you grow up on a dirt road in the middle of nowhere, even this many, many years after growing up like that, I still get excited to see what’s in a city.

So you’re writing a book.

Which, I’m way behind on. That’s why I’m taking a break from the music, because I’m working a lot of those stories out on stage, and it’s taking my whole hour-long show to do it. But, it’s like, after spending so long writing pages about yourself or your family or essays, you’re like: ‘Ugh, I don’t want to be this self-aware anymore. I just want to sing a dumb song and have a good time.’

I’m sure you get asked about comedy influences a lot, but you were a musician first — who inspired you musically?

Definitely John Prine. But you know who inspired me a lot was Jonathan Richman, the guitar-player guy from ‘There’s Something About Mary.’ I saw him perform in a little bar in Minneapolis. He was pretty widely-known as being a folk musician, so I think I paid 10 bucks to come in and see him perform for a couple of hours. And he didn’t stop smiling the whole time. His joy of just being there and being on stage. He really looked like he was appreciating the moment, and the fact that we were all experiencing this together, and that it will never be repeated exactly like this. I have constantly been striving for that — to let people know that I appreciate the fact that I’m there. Now I’m overly concerned about the audience: Are you having fun? How’s the parking? Are you getting drinks? But I really am happy to be there, and I want them to know it.

That is a great lesson to find the joy in what you’re doing.

Yeah it really is. Even if you haven’t slept, to just keep going, and find that thing that makes you happy. And for me, it’s to make other people happy.

Do you think being one of six children affected your sense of humor?

Oh yeah, because you learn that life isn’t fair, so make the best of it. And there was a lot of storytelling around the campfire where I listened a lot more than I talked.

Even talking to you now, you seem to have such a sweet, calm disposition — do you ever just explode with rage?

[Laughs] Oh, yeah. I don’t sleep well, so I have a lot of those days. But I’d feel so bad about it, I tame myself before I even have those thoughts. My guilt complex kicks in before I can even think that way. It’s my Minnesota/Wisconsin guilt. My immediate reaction to conflict is to apologize immediately.