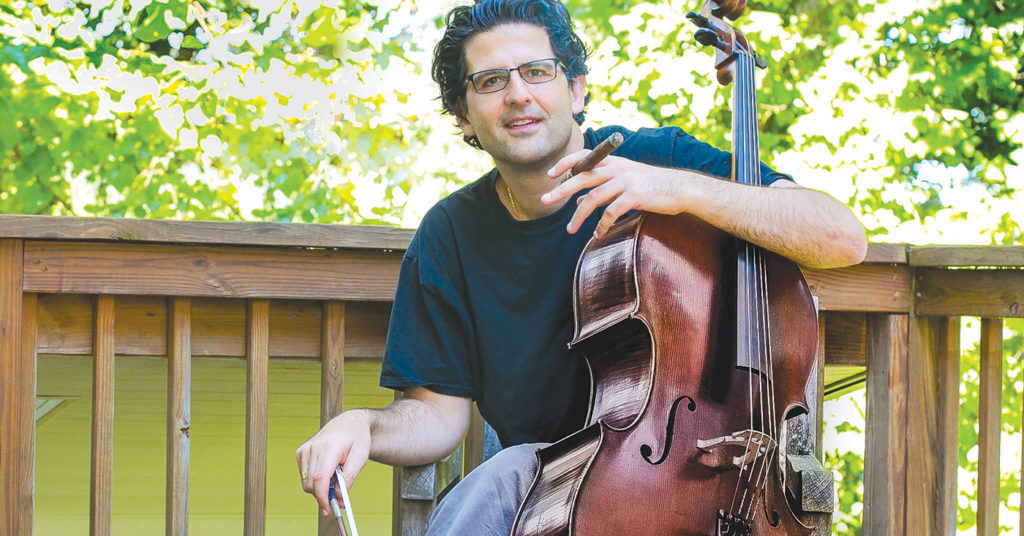 Americans have always had a love affair with Antonin Dvorak, the Czech composer who lived and worked in the United States for five years in the 1890s. That is when he created several “American” works, including A Symphony from the New World — of which we New Worlders are particularly proud.

Dvorak was a man about town in New York City, where he headed the American Conservatory of Music and collaborated in composition with the New York Philharmonic. But he also summered in tiny Spillville, Iowa, where he is said to have heard, or conjured up, a vivid visage of the vast plains of North America, and the “Indian calls” of its Native Americans. He also soaked in the sounds of African-American spirituals, introduced to him by an African-American student. Some cynics say Americans have bent their ears around so that distinctively Central European music sounds like Native American melodies. But, what the heck! The truth of the matter is Dvorak had no interest in disputing the positive impressions of his American fans. He was as enthralled with America as Americans were enthralled with him. All of which brings us to Israeli-American cellist Amit Peled, who will perform Dvorak’s Concerto in B Minor for cello and orchestra in concerts with the Louisville Orchestra Friday and Saturday in Whitney Hall. The “All Dvorak” program also includes the composer’s Slavonic Dances, and his Symphony No. 7. Guest conductor Donato Cabrera has the baton. Peled says the cello concerto — especially its big and bold beginning — springs straight from Dvorak’s American experience.

“The first movement, I am Dvorak,” Peled said. “I’m in New York. I’m in the center of the world, in this majestic, growing place. You just throw Dvorak into New York in the 1890s: It’s exciting and noisy, and he feels all those things in the city.” The concerto begins with a famously-long orchestra introduction, setting things in place for the soloist — who enters like a hero — cutting strong, wide swaths across the strings.

“The first thing I do when I teach this piece is I go to the internet and search: New York City 1895 Images. You get black and white photos of Central Park, of carriages with horses, Columbus Circle, big buildings. It’s all exciting, and Dvorak was in the center of that.”

Peled, one discovers, not only plays the notes, but tells the stories. He’s a touring soloist, but also a teacher at the Peabody Conservatory, in Baltimore, where he lives. He picks up the story as the concerto moves from the bustling city to a soft and tender mood. A love song in the second movement  … then, finally, sadness at the end.

“There were actually two endings to the piece,” Peled explained. “The first was a big Hollywood ending, happy and heroic, which is similar to the beginning of the piece.”

But Dvorak let that go and penned another ending as things changed in his life. Peled said it is a story of tragic love. Dvorak had written the second movement with a theme from a song he had written long ago for his wife’s sister, Josefina — whom he had always been in love with, but never revealed. Then, one day in 1895, a letter arrives in New York with news that Josefina is dying. Dvorak and family return immediately to Europe.

“Inside,” Peled said, “Dvorak tells himself, ‘I am going to tell Josefina I am in love with her’ – and this is a huge decision for someone who is married to her sister. Today, you hop on a plane, but at that time, of course, you take a boat across the Atlantic.”

The concerto follows the story.

“Comes the third movement you feel the anticipation,” says Peled. “You run off the boat — I run home, and I open the door to tell her finally I love her. But when I get there, I find she has already died.”

Of course, musicologists warn that classical composition is seldom a translation of events in a composer’s life. But Peled understands a performer can convey feelings that are in the music. Such as, a hint of foreboding in the first moment of the concerto — a “major sixth” chord, which, as we understand it, leaves out some notes. Leaves empty space inside the chord.

“And you have to play that with a feeling of missing something,” the cellist said. “We all have something we miss. Maybe something from home. Something we don’t have anymore.”

Then he laughs. “As for me, I am an American citizen, and I love it here,” he continued. “But I do have a feeling of missing something from home … my mother’s chicken soup.” Peled has enjoyed a measure of notoriety by performing with the cello once played by the late Pablo Casals, the famous 20th-century Cuban cellist. The instrument has been on loan to him from Casals’ widow, Martha. Casals was the first great cellist extensively recorded on LP records. He appeared on television, and performed in a special concert at the Kennedy White House. Many Casals fans have attended Peled’s concerts to hear Casals’ instrument, made by Matteo Goffriller, in Venice, in 1733. Alas, the Casals cello has opened an old crack, and is presently in the hands of a master repairman. But don’t worry, Peled has a new Jean Baptiste Villaume cello, built in the 1840s, that he says actually fits him better, because it is much bigger — with a big, beautiful sound. The Casals cello is on the small side, and Peled is on the large side — at 6 feet, 5 inches. And of course there is a story. Peled said the Villaume cello actually found him.

“It was owned by a family in Germany, but no one was playing it because it is such a monster size,” Peled said. “The owner didn’t know how to find the right new owner for the cello, so he went on the Internet and typed in the words: ‘Tall cello player.’ And up popped my name.”