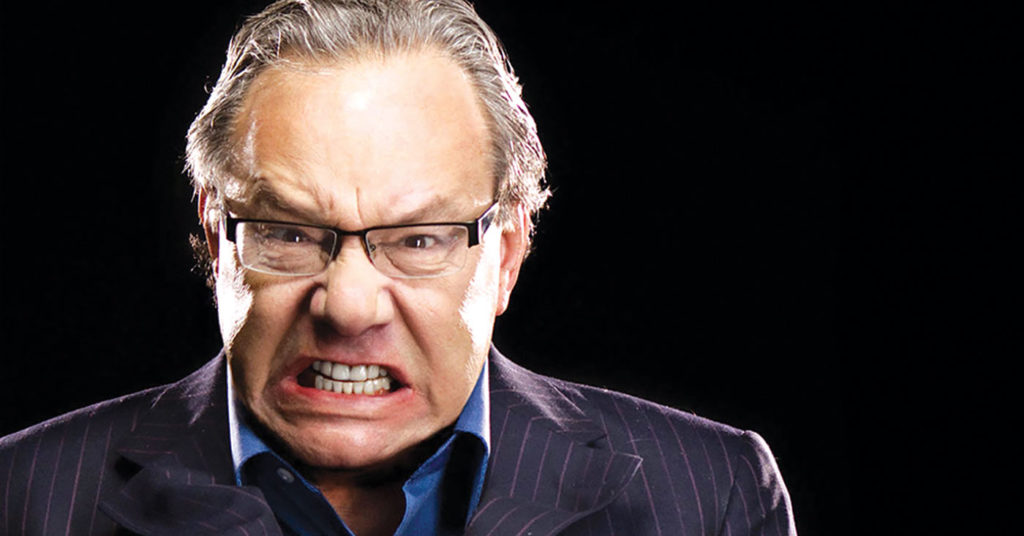 Lewis Black is one of America’s best political satirists and most-beloved comedians. You’ve seen him in films including “Inside Out” and “Accepted,” on “The Daily Show” and in his hour-long specials. Black took a few minutes after the first presidential debate to discuss the election. If you want to hear more, he will be performing this weekend at Horseshoe Casino.

LEO: What are your feelings after watching the first debate?

Lewis Black: I have no feelings. It’s absurd. You have somebody who is on the debate team debating someone who never even made the debate team. I mean, it just doesn’t make sense. First off, when you have the two-minute sections when someone is speaking — the person who is speaking, their mic needs to be on. The person who isn’t speaking, their mic needs to be off. That shit where they just badger from the side, it has to stop. I don’t need the moderator saying, ‘It’s not your turn.’ Turn the microphone off. Is it that hard? Can they come up with a switch? Instead of being a useful moment for whatever side, it becomes a moment of embarrassment for that side. She has to just sit there, whether she likes it or not, while he goes through all that rhetoric about if he was for, or against, that fucking Iraq war. The fact is: He was for that. And then she has to say, ‘Well, this is what really happened. It’s a matter of public record.’ And here is another thing that bothers me: They allow him to talk in generalities. They never try to nail him down to a specific.

Are these possibly the two worst candidates in American history?

At least Hillary [Clinton] is a legitimate candidate. She is disliked, and she is distrusted. They are certainly the two most-distrusted and disliked candidates. But someone please tell me how [Donald] Trump is a legitimate candidate. And for the Republicans to stand by and let this happen is reprehensible, as far as I’m concerned. I live in New York. I’ve watched him all my life — so I feel like I know a lot more about him than these people around the country who feel an affinity for someone who is a megalomaniac asshole. I don’t know where the affinity comes from, but I think it’s a backlash that I’ve been expecting for a long time now. It has to do with Washington, D.C., living in a bubble. So what we’re seeing is a group of people who want to blow the government up — and that’s why they want him in there. And as far as I’m concerned, that is unacceptable. You don’t do that. She at least has done the work you have to do to govern. You may not like the fact that she has no goddamned common sense. Why blow up all of the emails? It was stupid. But she has been convicted of nothing except in the court of public opinion. I think she was convicted the moment she didn’t leave Bill Clinton over a blow job.

You have to admit they both have problems with accountability.

Has the two-party system finally proven to be a failure?

Oh, it’s failed us for a long time. These people are supposed to compromise, and that’s where it’s failed. That’s the deal. Your job is to go up to Washington and come up with agreements. It’s not to go up to Washington and tell us you can’t come up with an agreement. I know you don’t want this guy to be a Supreme Court justice. We all know it. But you know what you do? You be a congressperson, and you sit through it. And you put them up in front of the American people — because that’s your fucking job. After that, you can vote against him. But what are you so afraid of? They might actually like him? It doesn’t matter. I don’t care. It’s your job. They did it because the Democrats did it, and the Democrats did it because the Republicans did it. That nonsense stops. You don’t get to make these fucking things up as you go — just do your job. It’s amazing how they always come to an agreement when it comes to voting themselves a pay increase, right?

People keep saying to vote Hillary because you get Bill. Don’t you think that’s wholly untrue and a little bit sexist?

Of course, that’s ridiculous, but at the end of the day you’re voting the brand. The Clintons are a brand, and so is Trump. I’d rather vote Coke than Pepsi. But I want to be absolutely clear: I am adamant against Trump being a candidate. Adamant! Every day, it’s just enough is enough. I’m certainly not saying you have to go vote for Hillary — but you cannot vote for someone like him. You cannot vote for someone who has said the things that he has said.

Were you surprised when Trump said in the debate not paying taxes ‘makes me smart?’

If that’s not enough, I don’t know what is. That, and it was smart business for him to bet against the American people during the housing crisis. I was broke until I was 40. And when people come to me and say, ‘You know you pay more taxes than you should’ — I consider it a privilege to pay them. If I’m in a country that everyone thinks is so fucking great, then it’s my privilege to help in any way I can.