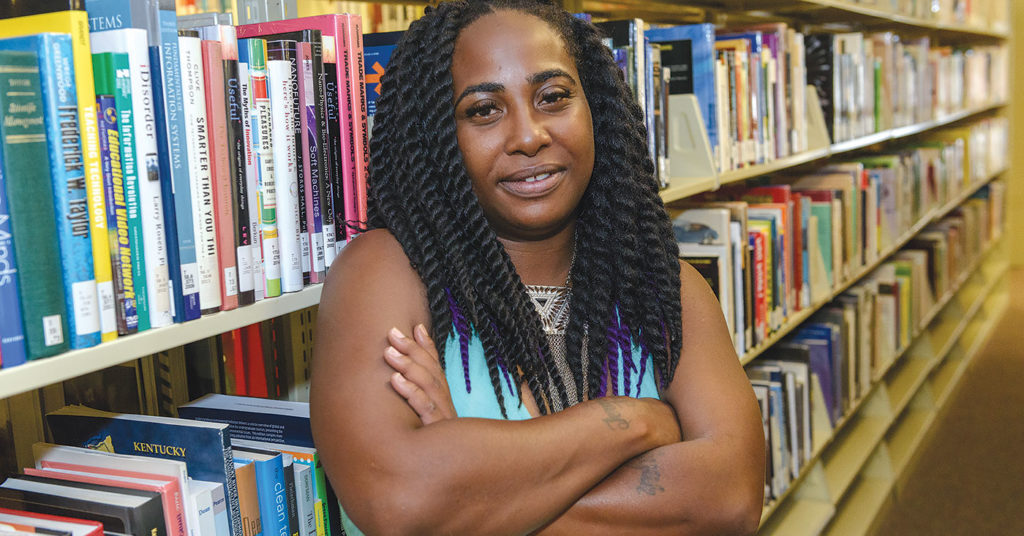 “If enrollment falls another 20 percent, or we get cut significantly, we may have to revisit that down the road,” JCTC President Ty Handy told LEO. “We can’t afford a continued decrease in enrollment and state funding and not reach another tipping point.”

Dumping talented teachers who get through to students doesn’t seem like the wisest way to ensure the future of an educational system, and students and staff agree that the heart and energy of the school have been ripped out.

Months since the layoffs, former employees are working to recover and rebuild, remaining faculty are trying to survive and students are learning what it means to be in a slimmed-down college.

“It’s still a little raw,” said Lisa Simon, 41, who was an assistant art professor until the layoffs. “For five years, this was so much a part of my identity, and I worked so hard. There’s so much emotional investment. A lot of our students didn’t have great high school experiences, or have been out of school, and are just aimless and are looking for something or someone to put them on a path.”

Since the layoff, Simon has become a resident artist at Kentucky Mudworks and is doing freelance mural and exhibition projects. And she will also return to JCTC as an adjunct next semester to teach a drawing class.

“I get paid barely anything, but I still want to stay connected to that community,” she said. “I miss my students, but I am definitely moving on. It was a very difficult job, and I have found that even though I am at a financial disadvantage, my life has become way less stressful.”

“The school is run like a business as opposed to an institution of education. The people who really suffer are the students, because next semester all the professors will be very angry,” she said. “There are classes that will be cut even though the president says [they won’t]. A lot of the things students need are disappearing. I don’t really see JCTC becoming this gleaming beacon of enlightenment right now.”

Some changes have come with the new school year, but Handy and students alike said the cutbacks do not seem to be affecting graduation schedules.

“I am not aware of any students facing that problem. We had adequate spaces available in our classes to meet that need and we always try to work with any student that is nearing graduation to make sure they get the classes they need that last semester,” Handy said.

Class sizes have risen to 20.5 students per class from 18.5 in fall of 2015. Classes, including a few art sections and programs, including medical sonography, have been cut too, he said.

“If we were offering 20 sections of a current course, maybe now we can only offer 18,” he said. “Most of the cuts were in high-volume courses, which are courses that we offer many sections of and have many students enrolled in.” These tend to be the basic classes for students intending to transfer, including English, math, sciences, social sciences, and arts and humanities.

Instructors also have to move between Kentucky Community and Technical College campuses more often as a result of the cutbacks. Handy said there was always some bouncing back and forth among locations and subjects.

“We’ve told faculty to be more flexible in terms of where they might teach,” he said. “The adjustments we made increase some of the need for that.”

Handy said financial problems that had been building for years hadn’t been dealt with, and changes had to be made. Consistently decreasing enrollment and years of budget cuts sent down from the state had put the school $8.5 million in debt. JCTC enrollment peaked in 2010 at 15,000 students, but shrank to 10,700 by this spring.

To remedy the situation, Handy, who took over from retiring president Tony Newberry last October, came up with a plan to get the school back on track. He said the fact that he was new and not personally well acquainted with the employees he was eliminating helped him be efficient without getting emotional.

“Being able to go in from that perspective probably helped, though sometimes it’s better to have a better grip on things,” he said. “We are restructured correctly for the future. At some point, you reach that tipping point, and you’ve lost one third of your enrollment, and you have to make these adjustments. We are the right size now for the student body to be served.”

Handy said he does not foresee having to make any more employee cuts and that the school is not in danger of closing.

“We’re comfortable at this point. We’re not worried about making ends meet this semester,” he said.

Enrollment dropped 5 percent from last fall to the current semester, he said, adding that there are now 250 adjunct faculty members and 300 full-time faculty, which is “consistent with previous years.”

“Currently we are at 11,600 students this fall,” he said. “At this time last year we were at 11,800 students, so we are down again a bit this fall. We did budget for the decrease, however, and are currently within 15 students of our budgeted head count for the fall.”

JCTC will see a little more money than expected because of the Kentucky Supreme Court ruling recently that Gov. Matt Bevin didn’t have the authority to cut state university funding, and now the state has to return about $18 million. Handy said JCTC would get only about $250,000 of that amount, and that no let-go employees will be re-hired as a result. The funds will be used for regular maintenance of the campus.

“Most of our financial issues are not due to state budget cuts — it’s really due to enrollment decrease. The enrollment decline is one that is being mirrored nationally at community colleges and I believe it is being caused by more than one factor.”

They include Louisville’s relatively low-unemployment rate, which Handy said may lead some people to feel safe not pursuing a college degree. “As soon as the labor market tightens up, we can expect more people to wish to improve their employability through education,” he said. Also contributing is the feeling that “college is not for everyone, and the return on investment does not make it worthwhile.”

Handy rejects that. College education predicts income, he said, adding that “No other factor comes close. The unemployment rate of less-than-college-educated individuals is about half of that of those with a college degree. So not only are wages much higher for degree-holders, job security is as well.”

“They fired the next 30 years of the college,” said recently-retired JCTC professor and former KCTCS Board of Regents member Michael Ginsberg. “These were people who were committed to the students and this was a career, it wasn’t a job. There was passion behind them, and they were the driving force behind everything good that was happening. And they’re gone.”

Ginsberg said the recent cutbacks didn’t have to be so devastating. He said that former KCTCS President Michael McCall and the Board of Regents could have worked to stop the bleeding much earlier. The $815,751 McCall received, when he retired in January 2015, has also raised questions about the way the school system manages its funds.

“Gov. Bevin has pushed us over the edge,” he said. “But we were at the edge increasingly over the past seven or eight years, and there was no sense from the board that we were in crisis. It was always the opposite: We’re doing great and we’re on the way to being the greatest community college system in the country. There were times when I was critical and nobody wanted to hear about it. We were supposed to be watchdogs and we eventually turned into lapdogs. I just resigned. I was wasting my time.”

‘He was a motivator’

For students, the new school year, minus the laid-off staff and faculty, has palpably changed the institution’s atmosphere for the worse.

“It is different. It feels awkward,” said Simon’s former student Katrice Gill, 28. “The staff that are still there seem more tense. They’re not as inviting and friendly and open as they used to be.”

Gill is graduating in fall, and will move on to UofL. That was her original plan. The layoffs didn’t affect it.

Other students are also experiencing some emptiness brought on by the absence of treasured teachers.

Maria Jackson is saddened by the loss of tenured associate professor of commercial photography Tony Guffy, who was initially going to be laid off, but took an early retirement deal instead. “I miss seeing him in the hallways,” Jackson said. “He was one of the great teachers. He was a motivator.”

Cosmetology student Karen Orellana, 21, lost instructor Crystal Beeler. ”She was an excellent teacher,” Orellana said, adding that she knows discouraged students who have abandoned the program, and her classes are smaller then ever.

The cuts didn’t make for a clean break. Unresolved issues linger. A number of laid-off staff and faculty are currently in legal conflicts with the school, claiming they weren’t given the amount of notice required before their jobs were terminated.

Handy said a 90-day notice applies only if the KCTCS system declares a state-called “financial exigency.”

“The governing board of the whole system has to make that declaration of financial exigency. They have not. We’re not at that point as a system,” Handy said. “The financial threat is really a local issue for us. Because we have not made adjustments we should have made, we are in a worse situation than most. All the colleges are in different financial situations. It was my goal to give just as much notice as I could. Everybody got between 63 and 78 days notice. I understand the desire by employees to fall under that policy. I’m empathetic, but it really is a system-level policy.”

A laid-off library specialist, who had been employed by JCTC for 22 years and wishes to remain anonymous, believes she and some of her fellow former colleagues were cheated and “that something is not quite right.”

“I did not expect that any of us in appeals will regain our jobs, but we do want to hold them accountable. [They say] there is no financial emergency throughout the system, yet other schools in the system are laying off employees. I find that odd,” she said. “They’re trying to use semantics. This doesn’t hold water. It’s not a good situation. I feel bad for the students.”

The laid-off library specialist said her four appeals were denied, and her union lawyer is taking her case to court soon.

A couple months ago, Gill sat outside the downtown JCTC library with tears welling up in her eyes as she recalled the day Simon was let go. “There wasn’t a dry eye in the school,” Gill said. “Simon put in a lot of work, and it’s like a slap in the face.”

Since losing his job, Friend has focused on his art. He has a painting exhibition later this year at the Tim Faulkner Gallery. Despite that, Friend is still far from a full layoff recovery. “I am really feeling depressed,” he said. “Like a divorce.”

But he is doing better than he was just a few weeks following his layoff. “I sat around curled up in a fetal position for a month or so, then I thought what the hell am I doing?” he said.

Friend is in the process of figuring out what to do for the rest of his life. “I’m 48 years old and to be let go from a position like that is tumultuous to say the least,” he said. “It completely altered my life in the snap of a finger.”

“These are the kind of teachers that they had there, and they got rid of them,” said Frederick Capps, 38. “If you have good professors that care, getting fired, no one is going to want to come to your school.”