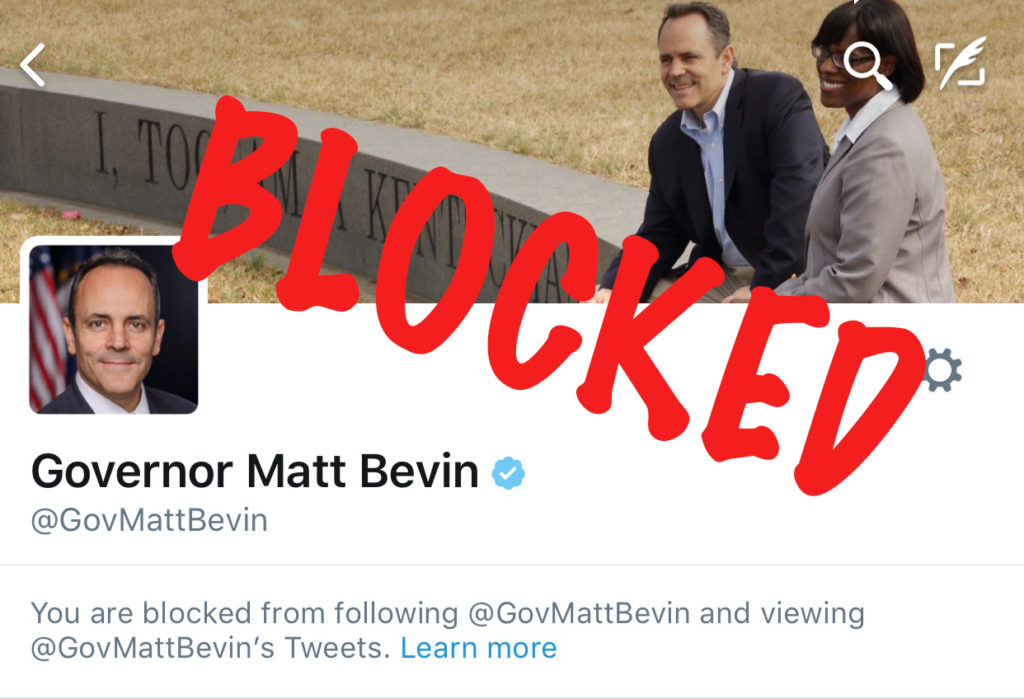 Gov. Matt Bevin has blocked me.

He blocked me from his official Twitter account after I criticized him for using it for partisan politics, rather than using it as a tool to talk about policy and governing the state of Kentucky.

I don’t know if blocking detractors is common practice for Bevin, but it’s not surprising. A governor who tweets selfies like a teenager and doesn’t know the definition of “remove,” when it comes to abolishing state boards, probably doesn’t have the confidence to face criticism from the media.

I don’t understand Bevin’s obsession with Twitter, but then — he seems to be modeling himself after Donald Trump, who uses social media as if it were a bullhorn.

It is appallingly unprofessional for him and the official spokesperson for his office to obsessively communicate via 140-character messages — particularly when discussing life-or-death issues (see: U.S. Rep. John Yarmuth letter). This is not the type of behavior becoming of an elected official, but is more reminiscent of a tyrant or dictator who silences critics and projects his own insecurities onto the world around him. (There is plenty for Bevin to be insecure about … like which judge will embarrass him next? Maybe he blocked me to prove that he knows the definition of “remove.”)

On a serious note, the use of government property and time to solicit votes or woo voters for a political party is strictly prohibited. It is unclear whether the Gov. Matt Bevin Twitter account is the same as, say — him using the office mimeograph machine to print pro-Trump leaflets. That said, it is a sad, shameful day, when the governor of Kentucky blocks his constituents and members of the media. It is childish and unbecoming of the office he holds.

Criticizing, critiquing and, yes, even antagonizing is my job. Calling out hypocrisy and challenging authorities is what we should expect from media. We should also expect our leaders to be professional, do their jobs and, most of all, take criticism as adults — not block them by holding their hands over their ears.

(Editor’s note to Gov. Bevin: Good luck ignoring LEO — the largest local weekly paper in the largest city in the state. We’ll be here long after you will.)

Want the governor to block you too? Apparently it doesn’t take much. Here is what happened to get me blocked:

Wednesday evening, Bevin’s press secretary, Amanda Stamper, responded to a radio ad that President Obama recorded in support of my dad, U.S. John Yarmuth for his hard work defending Kentucky’s expanded Medicaid coverage — coverage that extended to over 400,000 Kentuckians, which is now in jeopardy because of Bevin. 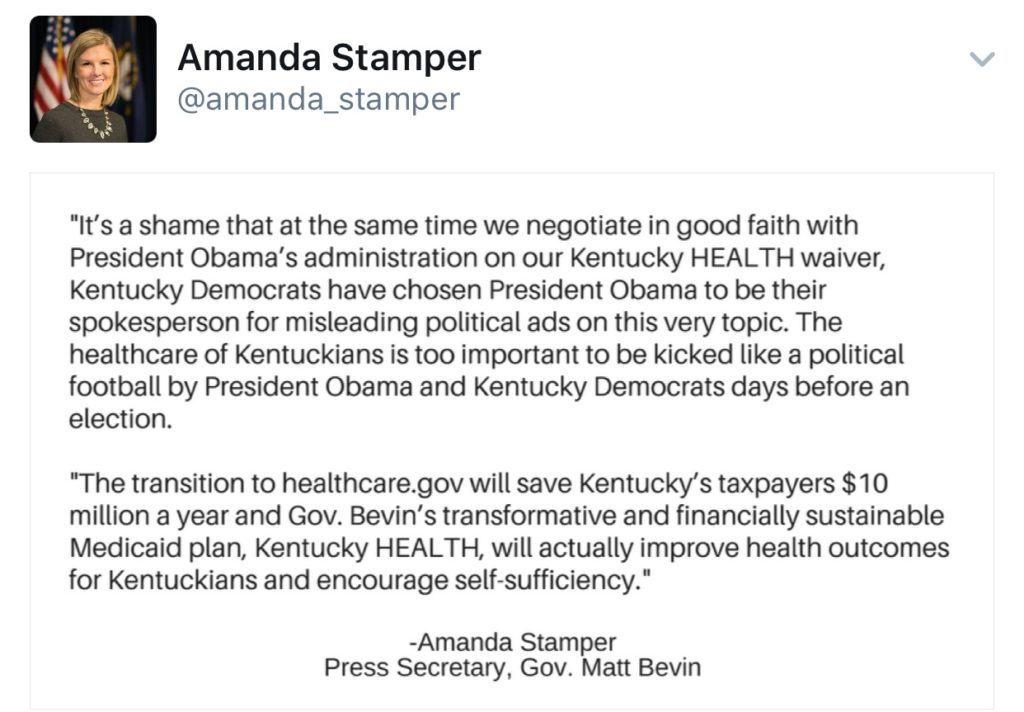 I responded by reminding Stamper that America chose Obama to lead on healthcare reform…and then we reelected him. As well, I felt it necessary to remind her (or just point out) that her boss is the one not on the ballot this year, and that we would all appreciate it if he got out of politics and onto governing. (I did compliment their success on the major dress code reform for state workers that his administration announced this week.) 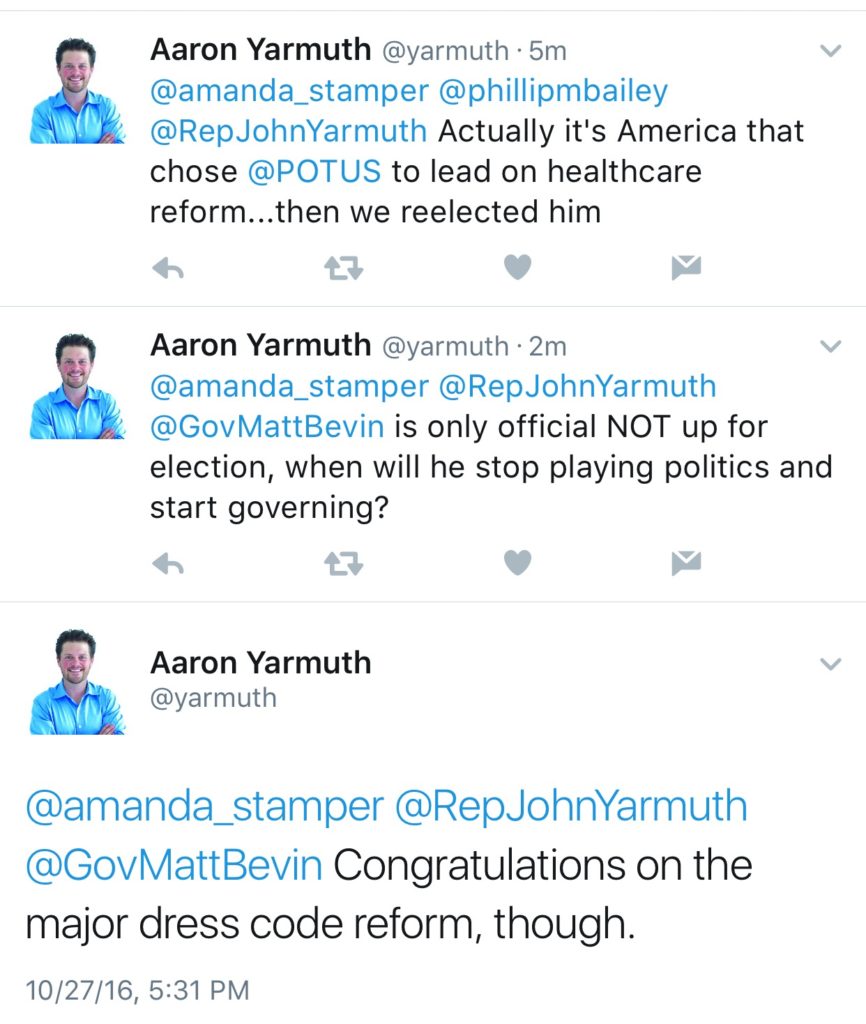 It was just after this that Bevin tweeted, from his official governor’s account, a purely political cartoon (which was a caricature of Kentucky coal workers). So, just to point out hypocrisy when I see it, I responded, albeit sarcastically, that this was supposed to be the same governor who was above playing politics. 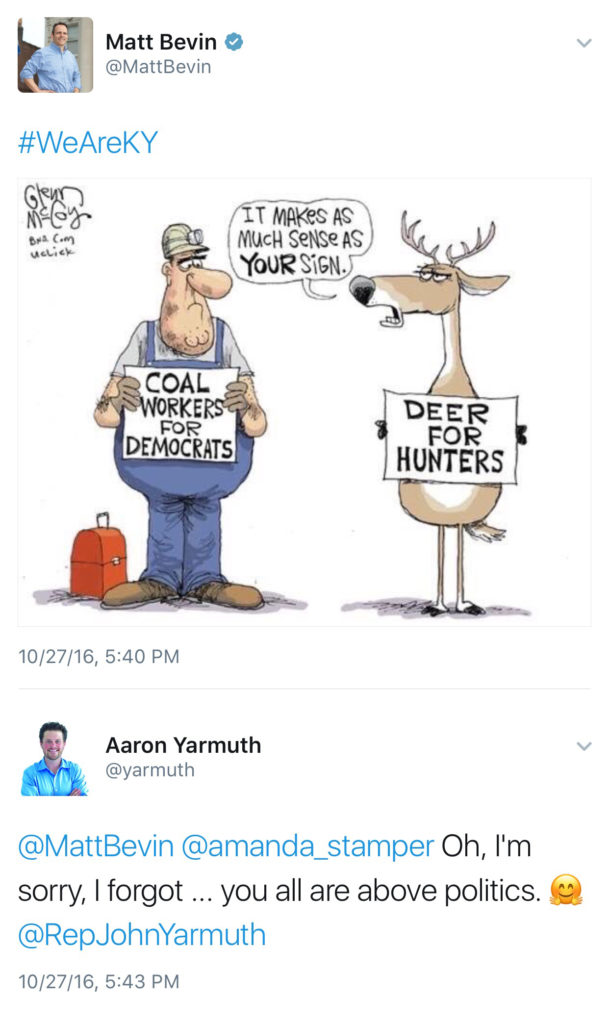 Bevin’s press secretary felt compelled to respond on behalf of the governor, tweeting, “Wow! That’s a lot of hate and bitterness to spew into one afternoon.” While it’s difficult to convey tone and emotion in 140 characters or less, I wanted her to know that there was no animus in my tweet, and that political-cartoon tweets are not real answers to serious issues. Once we were friends again, she responded with a slightly more professional tweet(which was probably intended for another tweet, not the governor’s cartoon tweet). While I appreciated her response, I couldn’t help but sarcastically draw-out the misleading nature of her misleading tweet. 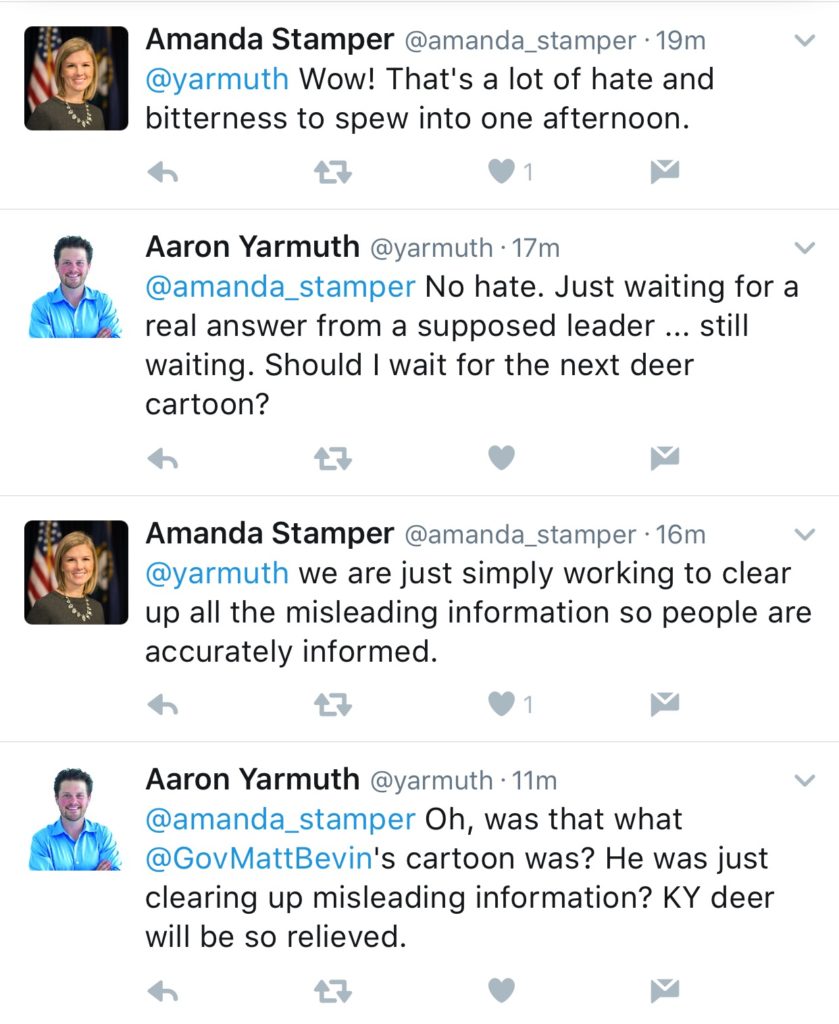 Ultimately, this Twitter exchange was silly. But that is precisely why it makes the governor’s petulance — Twitter-blocking a constituent and member of the media — so unbelievable. Collectively, Bevin and his team need to get serious about their jobs, raise to a level of professionalism we deserve of our elected official and … for God’s sake man … stop tweeting!