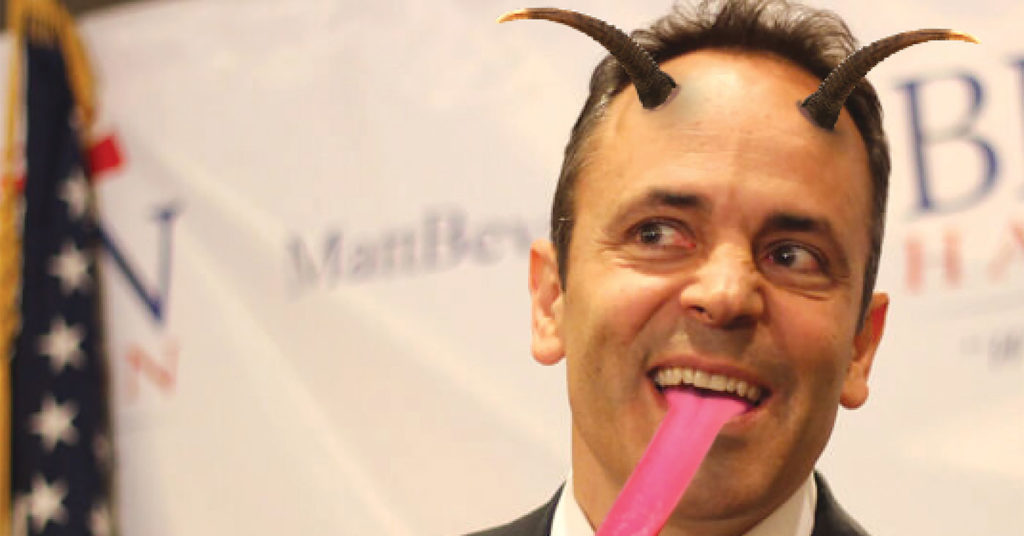 No no, Gov. Matt “#KYTRUMP” Bevin. You do not get to say whatever you want without being challenged — in this case, a tweeted quote, without context, to justify why you are jeopardizing the healthcare of 440,000 Kentuckians.

Just because you put it on the internet, doesn’t make it credible.

Bevin wants the federal government to approve a waiver so Kentucky can cut back Medicaid coverage. If it is denied, he has said, he will rescind all expanded Medicaid coverage in the state — eliminating healthcare for 440,000.

Tuesday, in response, U.S. Rep. John Yarmuth hand-delivered a letter asking … pleading … with Bevin to withdrawal his request for a waiver.

Although Bevin’s press secretary issued a two-sentence response, accusing Yarmuth of playing politics, the governor himself took to his favorite mode of communication: Twitter.

In a series of tweets, Bevin used his official government Twitter account to post two “Fiction vs. Fact” memes and a quote of himself talking about his own proposal.

This is a real response from a governor to a sitting member of the U.S. House of Representatives? Sure, Yarmuth is my father and founder of LEO Weekly, but even I expect more from our governor. I mean, they are each other’s constituents.

But no, this was not the type of response — or delivery method — we want or expect from our state’s top official.

Then, hours later, Bevin once again tweeted, which immediately caught our attention. It is attributed to Thomas Barker, former acting general counsel at the Department of Health and Human Services, or HHS, and former general counsel of Centers for Medicare & Medicaid Services, or CMS.

According to the website for the law firm where he works, Thomas Barker is someone who had left HHS in 2008 — months before Obama became president and years before Obamacare became law. He took a job at a Washington, D.C., law firm by March 2009. In other words, a lobbyist. To be sure, Barker may have some experience at HHS and some knowledge of Medicaid and Obamacare, but he speaks with no more authority than does any private attorney with knowledge of the healthcare system. He had no role in HHS or CMS during the crafting of Obamacare or its implementation.

So this is all Bevin has to rebut the assertions of a U.S. representative, who works constantly with HHS and the head of CMS on the Medicaid expansion? That is his defense?

Yarmuth, with whom I discussed this, said, “What Bevin should have said is that he will work with CMS and HHS on finding a workable proposal for his waiver, instead of giving an ultimatum and going to plead his case on Twitter. Stop the Twitter stuff.”

But that is what you get from a governor who spends too much time on Twitter and not enough time taking care of Kentucky.