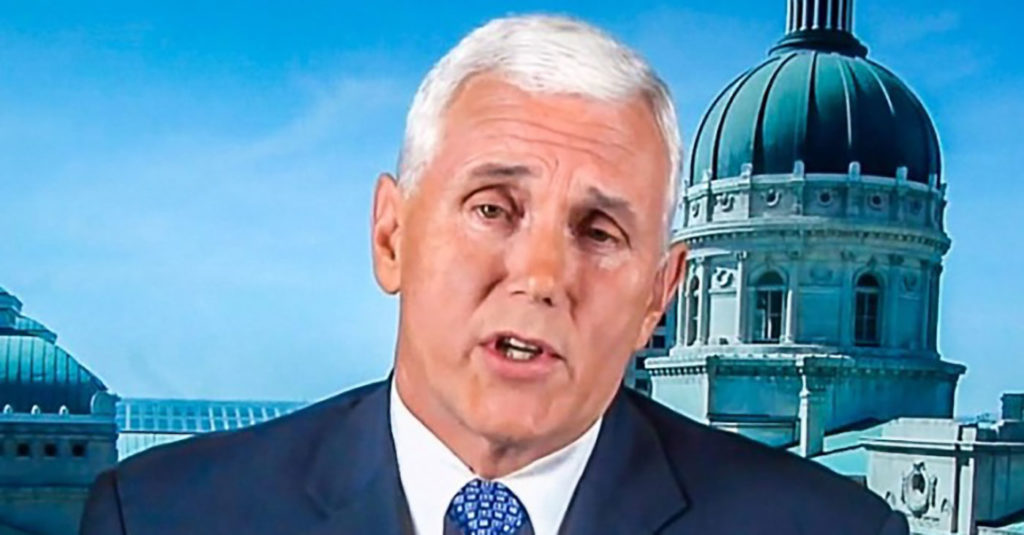 This article originally ran back in October, a few months after former Indiana Governor Mike Pence joined up with The Orange One. Now that pressing issues, such as immigration and healthcare, are front and center, it’s important to remember that Pence might not be the unfiltered blowhard that Trump is, but he has a deep history of pushing bad legislation.

He may look like your stern uncle, but Indiana Gov. Mike Pence, the Cheeto’s running mate, is birthed from the same test tube as was Gov. Matt “Trump-lite” Bevin. A look at the carnage he wrought as governor and congressman is eye-opening, if for no other reason than he could be a heartbeat away from the presidency (if you believe Trump has a heart to beat).

Our friends at alt-weekly NUVO in Indianapolis compiled this quick highlight reel on Penis, uh — Pence — and we added our own sparkle. As the NUVO editors said when Pence was chosen:

Pence is Donald Trump’s pick for vice-president — and that’s a sentence we can’t believe we’re actually writing. And that’s because, in the eyes of many Hoosiers, Pence has not exactly made Indiana great, as Trump famously claims he’ll do for America. In fact, Pence was removed from presidential consideration by the GOP after a series of … let’s say unfortunate events. Readers beyond the great Hoosier state, here’s a primer on Mike Pence and all the ways he has not made Indiana great again.

The law was designed to protect Indiana businesses from lawsuits if they cited religious freedom as a legal defense. Backlash from businesses and others who say it would be used to discriminate against LGBTQ people forced Pence to revise the law. But the damage was done…

Anthem, Cummins, Dow AgroSciences, Eli Lilly and Company, Emmis Communications, IU Health, Roche Diagnostics and Salesforce Marketing are just some that spoke out vocally against Pence post-RFRA. In fact, Angie’s List called off a $40-million expansion. Former CEO Bill Oesterle said the company would not invest because of RFRA, even after the revision.

HEA 1337 outlawed abortion entirely for a variety of reasons, added additional barriers to obtaining an abortion and required each aborted or miscarried fetus to be buried or cremated. The point of the legislation was not to support a woman in her grief after a miscarriage. It was to make it more difficult and expensive for health care facilities to provide early pregnancy termination, which is a legal medical service. It also barred fetal tissue donation, which runs counter to any claim that this is about helping women grieve, since many families find peace knowing their loss has benefited another family. The ACLU and Planned Parenthood immediately filed suit, and a federal judge issued a preliminary injunction, saying: “The woman’s right to choose to have an abortion pre-viability is categorical …”

4. Pence tried to create his own news agency, JustIN.

In an attempt to “streamline” the dispersal of news from state agencies, the Pence administration contemplated the creation of its own news service, to be called “JustIN”. The public outcry compared the plan to state-controlled media associated with communist countries.

Following the terrorist attacks in Paris — and under the immediate assumption that the attacks were orchestrated by terrorists posing as Syrian immigrants — Pence tried to block the resettlement of Syrian refugees in Indiana. A federal appeals court ruled against Pence,  with one judge saying his fears were “nightmare speculation.”

The Indiana Department of Education was applying for a federal grant to fund preschool education when, in the final stages of the application process, Pence halted the application and refused the grant, questioning its administration. One year later, Pence decided fed money for preschool is a good thing.

Scott County was a victim of Pence’s war on Planned Parenthood (sound familiar, Kentucky?), as an HIV outbreak hit communities there, infecting close to 190 people. Because of new restrictions and loss of funding through Medicare, Planned Parenthood was forced to close several locations around the state, including Scott County. And Pence waited more than two months to declare a state of emergency for the county.

Known as a “friend of coal,” Pence wrote President Obama to ask that he reconsider the Environmental Protection Agency’s Clean Power Plan, claiming its call for a 30-percent reduction of carbon dioxide emissions nationwide by 2030 would be detrimental to Indiana. Environmental groups called Pence’s reaction premature and irresponsible.

When Pence ran for Congress in 1990, he used political donations to pay for his home mortgage, credit card and groceries, golf tournament fees and his wife’s car payments, according to The Washington Post. The payments were not illegal then, but the Post said “it stunned voters” and led the Federal Election Commission to crack down on politicians who abuse campaign funds.

11. Congressman Pence could not get a law passed.

During 12 years in the House, none of the 90 bills and resolutions from Pence became law. “His interest was more in preventing things from happening — spending, taxing, expanding liberal social policy,” Carl Hulse reported in The New York Times.

12. Pence is a paranoid propagandist.

And finally, seeing ghosts in corners, when Pence was a conservative radio talk-show host, he blogged about the 1998 Disney film “Mulan.” “Obviously, this is Walt Disney’s attempt to add childhood expectation to the cultural debate over the role of women in the military,” Pence wrote, according to BuzzFeed. •