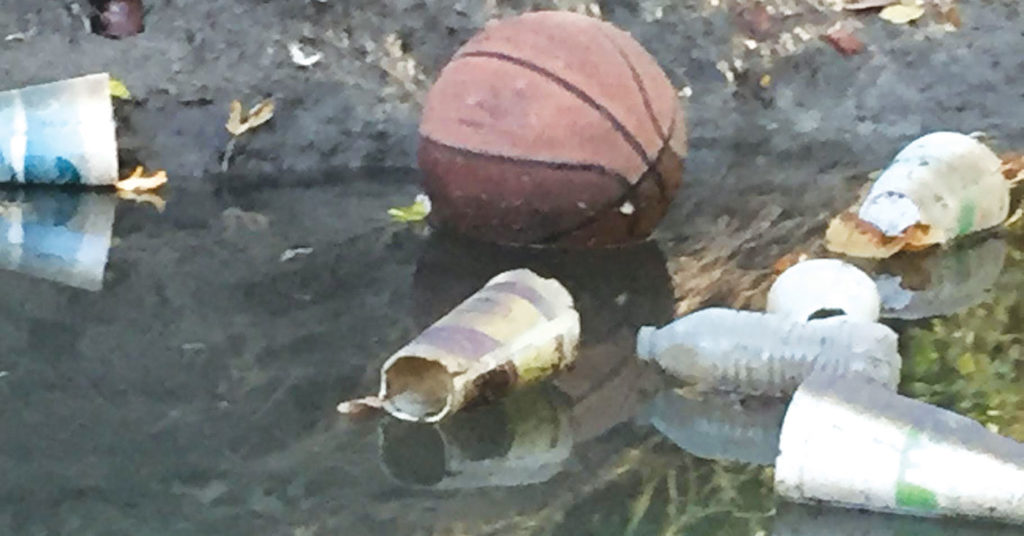 Beargrass Creek is a tale of two realities.

At the mouth of the creek, where it meets the Ohio River, blue herons catch the wind and fly over the choppy waters. On a spit of land, lovers cuddle beneath a blanket as dawn yawns, and a volleyball net awaits a game.

Paddle up the main stem, though, and reality drastically changes.

A basketball floats amid a debris field consisting mostly of Styrofoam and plastic bottles; an out-of-use sewage discharge point — it looks more like a Gothic castle tower than a place to release sludge — stands guard before a bend in the creek where runoff from a police impoundment lot drains down the slope, and discarded concrete slabs from the old Belvedere Park are piled upon the banks.

But people do care, which is why Louisville is about the see the premiere of “Beargrass: The Creek in Our Backyard,” a new film by Morgan Atkinson about the three forks of Beargrass and the entire 61-square-mile watershed.

The film and the reception, where retiring Metro Councilman Tom Owen will be saluted and Apocalypse Brew Works will serve beer made with filtered water from the creek, is meant to drive support for cleaning and protecting all three forks of Beargrass. Twenty-five environmental and community groups will exhibit at the event.

The film was the brainchild of Dr. David Wicks, 64, an outdoorsman and retired educator who teaches seminars about the creek and takes groups canoeing up its main stem to spark interest in the waterway. To him, the biggest danger facing the creek isn’t pollution or commercial development. It’s “apathy.”

“People just don’t know it’s there,” said Wicks, the producer of the film and a retired coordinator of environmental education for Jefferson County Public Schools. “They look at the beauty of Cherokee Park, and they don’t think upstream or downstream.”

So Wicks wanted a film that could be used by schoolteachers and neighborhood associations to reintroduce Louisvillians to the creek that runs through their neighborhoods.

Enter Atkinson. The 67-year-old filmmaker, who grew up in The Highlands and lives in Germantown, is known for his PBS documentary about Thomas Merton and for 15 other films that aired on KET.

But this project hit closer to home for Atkinson, who used to play in the creek as a boy, fishing “artifacts” out of the water and freaking out his mother whenever he brought them home. Three years ago, Wicks took Atkinson canoeing on the creek to pitch the idea of a documentary.

“He said, you know, I’d like you to do a film about Beargrass Creek.” Atkinson recalled. Fine, he replied, but films cost money.

So he did. Wicks raised about $50,000, half of which through a crowd-funded Kickstarter initiative. The Louisville Audubon Society contributed $5,000 to the project, while the Metropolitan Sewer District pledged $15,000 and opened its archives to Atkinson, who has taken no money for his work on the film.

Not everyone will be pleased with the finished product, he said.

For starters, it doesn’t mention the federal consent decree requiring the MSD to spend $850 million by 2024 to reduce untreated sewer water being discharged into the Ohio River. Neither does it present data on the state of the water quality in the creek. Not a single expert appears on camera. “If people are looking at this as an insider history of how to clean up the creek,” Atkinson said, “then they will be disappointed.”

Instead, he told an emotional story of the creek’s history, paying tribute to the Shawnee nation that once lived around it, and its neglect by the city through the years. As early as the 19th century, the creek was a breeding ground for disease. Slaughterhouse blood found its way into the creek. In 1845, the Morning Courier described the waterway as a “river of blood.”

Throughout the film, the creek comments on its past. Atkinson cleverly makes it the narrator, with actor/musician Will Oldham giving voice to what the waters might say if they could speak.

“I didn’t want this to be an environmental lecture,” Atkinson said. “That way, you’re essentially preaching to the choir. I do want an environmental message, and that message is, this [creek] is ours.”

It also contains several “stopping points,” Atkinson said, nuggets of fact upon which instructors can expound to teach about the Consent Decree, Clean Water Act, flooding, storm water runoff, and the city’s industrial past.

Wicks hopes to provide a copy of the film to eighth grade science teachers in JCPS — the year when students study water quality in depth.

He hopes the film will convince all Louisvillians that the city is only as healthy as the waters that run through it. “The quality of water that flows through our environment is equal to the quality of life in our community,” he said. “If we don’t take care of the quality of our water, it means we don’t care about life.” •