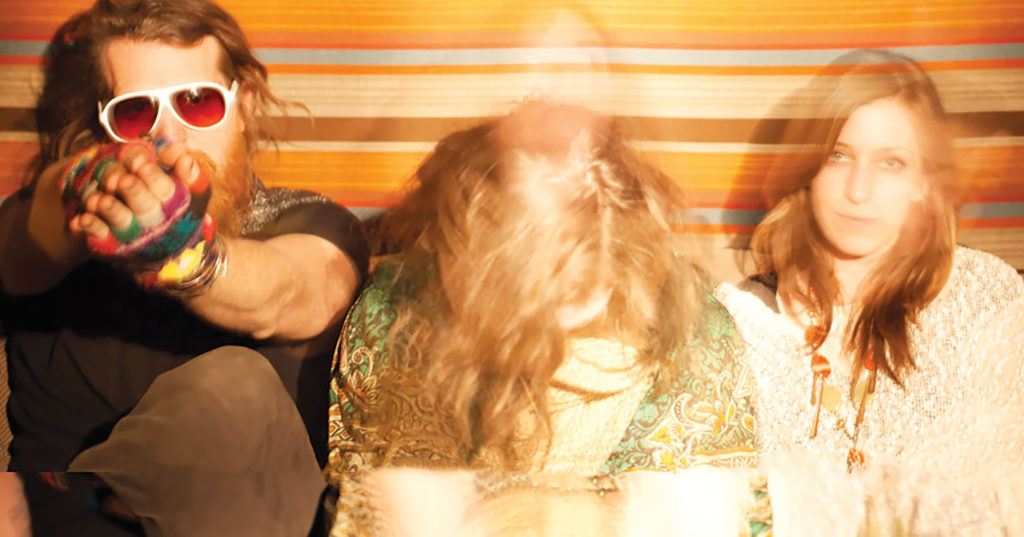 Twin Limb, a Louisville, three-piece experimental rock band consisting of Lacey Guthrie, Maryliz Bender and Kevin Ratterman, is set to release their first full-length album, Haplo, on Friday, Oct. 28. What began as a duo, with Bender and Guthrie, turned into a three-piece, when they went to record at Ratterman’s studio, La La Land. After Ratterman went from producer to full-time band member, they decided to hold those sessions (the basis of which would later become Haplo) and rerecord the entire thing to better represent where the band had evolved to. And, now, after a few years, changes and an EP (2015’s Anything is Possible and Nothing Makes Sense), as they gear up to release the record that started with those initial sessions, we caught up with all three members to discuss Twin Limb’s timeline and how things are different from where they started.

LEO: The band has mentioned in the past that there was a deliberate attempt to take time in recording Haplo. How did you approach recording the new LP?

Maryliz Bender: It’s such a strange scenario, since this new album was actually the first album we recorded. Kevin produced the album and introduced us to new ways of producing sounds. Once he unlocked that world for us, we’ve explored new sounds, even during the songwriting process. As a solo musician, I was always into adding tons of sonic layers through looping and progression, but I’m always amazed to see Kevin’s process of weaving those layers in and out of a song. Now, I consider those sounds or feelings I want to invoke when I’m writing and recording. I work with layers of vocals a lot, because I love the haunting quality it can add to any beautiful song.

Kevin Ratterman: I’ve never made a record the way I made Haplo — it happened all so seamlessly and strangely. We made the initial version in the fall of 2014, when they came in to have me produce their first record. They were still a duo. We recorded them playing live then started immediately heavily manipulating the sound after talks of wanting a more surreal experience than, say, a folk record. That’s when it really became clear that we loved working together, and our puzzle pieces all fit together so perfectly. Then, at the end of the initial recording session, I played an impromptu show with them, and that was magical as well. We all agreed that we should stay on that wave. So, after that show, I officially joined as a member. We mixed the record shortly after and thought we were done. So, initially, the first version of Haplo was complete in January of 2015. Then, as 2015 progressed, we started playing tons and tons of shows together, and touring, and then we got to become a live band together, and the sound started to take a whole new shape. We were still shopping version one of Haplo to find a home for its release and became impatient not having anything to sell at shows and start sharing with people so we decided to record a batch of the girls’ older songs as an EP. When we recorded that, we discovered that playing live together in the studio gave us a whole new feeling that we fell in love with. And the EP ended up sounding more like us than the finished version one of Haplo. So, shortly after the EP we rerecorded almost all of Haplo the way we recorded the EP — live together. But we wanted to keep a lot of the magic and sounds from version one, which was so special to us, so I entered into the maniacal weird collage process of layering the things we loved from the initial recordings … many of the sounds and overdubs and sound manipulations onto the live studio performances. So, it became this weird, surreal hybrid of the magic of version one with the live feel and togetherness of version two. Time consuming, but well worth it. We just made this one kind of backwards. But, couldn’t be happier.

Maryliz, before Kevin joined, you and Lacey worked as a duo. Was being a duo a conscious decision, or was it more of happenstance?

Maryliz: Lacey and I had been making solo music prior to joining forces, and we ended up reinventing some of those solo songs in Twin Limb. When Lacey and I got together to play music, the connection was instant and powerful and serendipitous. We didn’t have to put any conscious decision making to it, it just happened.

Did you find positives or limitations in working as a two-piece, either in sound dynamics or interpersonal relationships?

Maryliz: I had spent so much time writing by myself prior to meeting Lacey, so it felt so amazing to have someone else’s creative input. It was very contagious, and it fueled and inspired me. Writing with her feels so easy, I’ve never felt hindered by limitations. In fact, our writing styles are very different, so it felt like putting two puzzle pieces together and unlocking a whole new world. We didn’t experience any ideas of limitation until we discovered what we could do, through our studio time with Kevin. Once we heard all of those additional sounds, and had his creative energy fueling everything, we knew we couldn’t be without it.

Kevin, Did you have any reservations about joining, and how do you approach bringing a more dynamic feel while still maintaining the core Maryliz and Lacey sound?

Kevin: Absolutely, I was afraid. What they had as a two piece was so beautiful and pure, I was certainly afraid to spoil it by needlessly adding things. But in talks we all agreed that reinforcing what was already there was going to be a positive thing, so I simply treated it as architecture or gardening and added around them instead of over them. I added sound below and above with synthesizers and strings wrapping around the accordion and adding notes it wasn’t capable of playing, simply making the chords that Lacey had written more surreal and grand. And the guitar, in the early stages, was meant to add texture/space and a three-dimensional quality to the sound. It later became something that started to weave in and out of the vocals and reinforce the emotion of the lyrics and beautiful voices of Lacey and Maryliz.

Do you approach writing songs differently since Kevin joined the band in 2015?

Maryliz: I think Lacey and I still write the same way we always have — recording voice memos and adding them to our giant database of ideas to work on. But, we’ve certainly expanded on those methods since Kevin joined forces with us. We had the incredibly luxury to write from within the studio, with all of the studio equipment, and recorded some beautiful demos.

Kevin, Are you involved with the initial song and lyric writing or do you prefer to add on to the foundation of a song?

Kevin: On Haplo, most of the songs were written, and I was more of a producer’s role, coming in later to make sure the vision was being accomplished, sonically and emotionally. Later, we added “Sutro Baths” to the album, which was the first song we all wrote as a three piece. I love writing in all forms, but we have been having a blast as a three-piece, writing as a team from the ground up from jams or verse/choruses that one member will bring to the table. Lyrically, I would never touch Lacey’s lyrics — they are of the most beautiful lyrics I have ever heard. I’m always so immediately blown away by her lyrics.

How do you see the next Twin Limb release unfolding? Or is it too soon to know?

Kevin: The plan is to set aside some time in the winter of 2017 to finish up a lot of the ideas we’ve been kicking around and hopefully be recording a new album in the spring of 2017.

Maryliz: We have so much material to work on for the new album, it’s sometimes overwhelming to think that we have to start selecting the songs we want to work on. We’ve been so busy with touring or handling logistics around releasing this album that it’s been hard to think ahead, even one day sometimes. I’m so stoked for all the touring we’ll be doing this winter, and I’m excited to come back, full of inspiration, and take some time to lock ourselves inside a cabin with a fire and finish out the next record. What a dream.