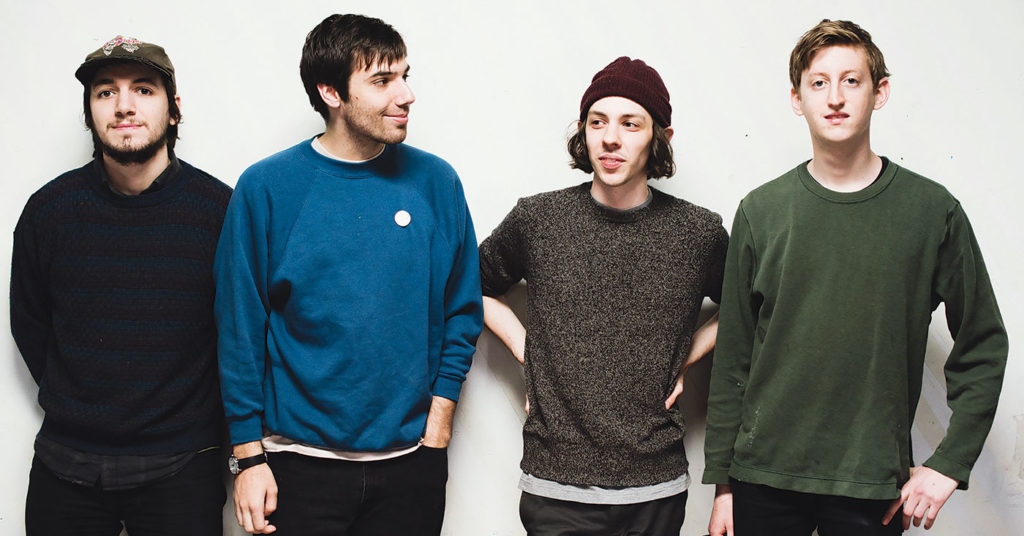 Coming out of Purchase College in New York City’s northern exurbs, the foursome known as LVL UP quickly grew an enthusiastic fan base with self-released EPs and albums. Sub Pop was quite taken with their twisty adventures at finding new edges for a classic, somewhat-low-fi indie-rock sound. The match of label and musicians has brought LVL UP to a new level with the recently released Return To Love.

Ahead of their appearance at Zanzabar Sunday night, drummer Greg Rutkin and bassist Nick Corbo gave some Q&A time to LEO. Considering how their band’s arrangements wring songs out completely, these are the members who could be disappointed by their obligations within the basic architecture of guitar-bass-drums.

As Rutkin puts it, “You do sort-of have to hold it down — which is a little frustrating. Nick does have guitar pedals — so he messes with tones and fun stuff like that.”

Corbo: “Do you remember when Mike [Caridi, guitarist] told me that I couldn’t use the fuzz pedal anymore?”

Rutkin: “I remember that. So messed up.”

Corbo: “I ignored him. Dave [Benton, the other guitarist] and Mike get to do all kinds of fun with effects and stuff. They have delay, and they get really fuzzy.”

Want some different fuzziness? Depending on who led a particular song’s writing, you’ll often hear one of several ambivalent approaches to spirituality. A set full of these tracks can bring you an intoxication that hedges toward thoughtfulness and drives you into wonder.

Outstanding individual tracks can also vary in how they reach the version that was recorded — or that you’ll hear from the stage. The new album’s “Pain,” Rutkin notes, came about from “playing the song for a year and we changed it as a band … shaped it to be a collaborative thing.” It was pretty much the opposite for album opener “Hidden Driver,” Corbo said. “There were moments of experimenting where it’s like, ‘let’s do a gnarly 12-string and kick it up a notch’ — but it kept the same growing-intensity structure that it had at the beginning.”