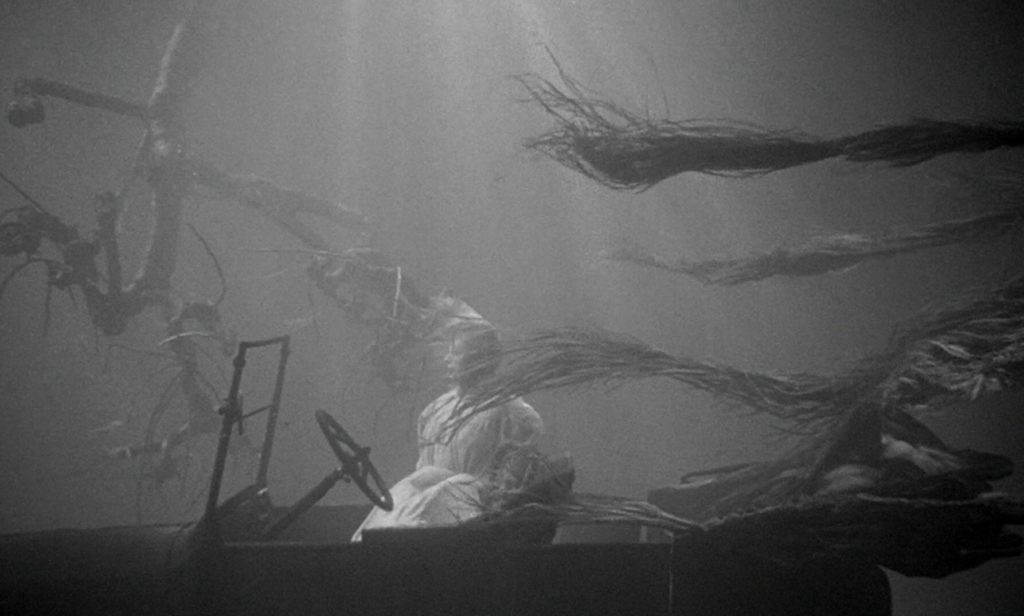 A still from the film "Night of the Hunter".

Brew Guru Yoga
Flat12 Bierwerks
$5 Suggested Donation  |  7 p.m.
You no longer have to choose between everyone’s two favorite after-work activities, yoga and drinking. Now you can mix the two at Flat12 Bierwerks with the Brew Guru series. Just bring your yoga mat to Flat12 (a few blocks away from the Big Four Bridge if you want to do a little walking too) and enjoy an hour-long yoga class and $1-off pints.

Game Show Night!
Kaiju
Free  |  9 p.m.
Fact: TV game shows suck. Fact No. 2: Live game shows at Kaiju are great. And you can see two of those great game shows this Tuesday for free. First up is “Why Would I Know That?!,” which pits a panel of comedians against each other and the audience in a game of “useless knowledge and stupid prizes!” Second is “Make ‘Em Laugh,” where audience members try to win free drinks by not laughing as comedians try to make them break their straight face.

Screening of “The Night of the Hunter”
Dreamland
Free (donations accepted)  |  8:30 p.m.
As if this presidential election hasn’t been scary enough, October is here which means it’s time to really get spooky. And you can kick it all off this week with a screening of “The Night of the Hunter,” a 1955 horror film where lead actor Robert Mitchum’s performance, as Dreamland describes, goes “full love/hate sinister/bananas into one of the best villain roles to grace the big screen.”

ReSurfaced (Oct. 6-8)
319 S. Shelby St.
Free  |  5 p.m.
Join ReSurfaced for another celebration of city revitalization starting Thursday where they will host a New2Lou Hangout with live music chosen by New2Lou, and Friday where there will be performances by the Spencer County High School Drama Club and Louisville Dance Alliance. And as always, plenty of food from local food trucks as well as drinks on both nights.

Pace of Glaciers & Rest You Sleeping Giants
Tim Faulkner Gallery
$5  |  8 p.m.
After all the stress you’ve accumulated from a full work week, having a relaxing drink at an art gallery sounds like a nice change of pace. And these week there two bands, ambient pop band Pace of Glaciers, shoegaze soundscape band Rest You Sleeping Giants, will provide the perfect soundtrack.

UofL vs. Syracuse
Lynn Stadium
$5  |  7 p.m.
After defeating No. 1 ranked Notre Dame, UofL’s mens soccer team is on track to win their conference and end the season with a strong shot at winning the College Cup. But before all that, they have to defeat conference rival Syracuse this Friday. So go show some support, and help carry Cards to a championship!

Garvin Gate Blues Festival (Oct. 7–8)
Oak Street and Garvin Place
Free  |  Times vary
This annual two-day arts and music festival is “one of the most prestigious blues festivals between Chicago and Mississippi.” With two stages the festival features both local and national performers, and food and drink from over 50 vendors.

First Friday at TFG
Tim Faulkner Gallery
Free  |  6 p.m.
To celebrate the arrival of autumn and the haunting season, Tim Faulkner Gallery is celebrating this First Friday by reworking their Main Gallery with new work from 8 local artists. So swing by and enjoy the work of these local painters, photographers, sculptors and a fresh new selection of drafts and specialty cocktails at TFG bar.

Sing A Song for Jeremy
New Vintage
Free  |  8:30 p.m.
This May we saw the passing of Jeremy Grawmeyer, a local musician from The Local Villains. And New Vintage, along with Grawmeyer’s friends and family, would like to invite everyone to come celebrate his life in the best way they know, “through music, laughter and fun.” The bands Thirty Spokes, Sound Company, RAMBLE and James Poff will be performings some of Grawmeyer’s favorite covers and originals, some of which he helped to write, but had never been performed.