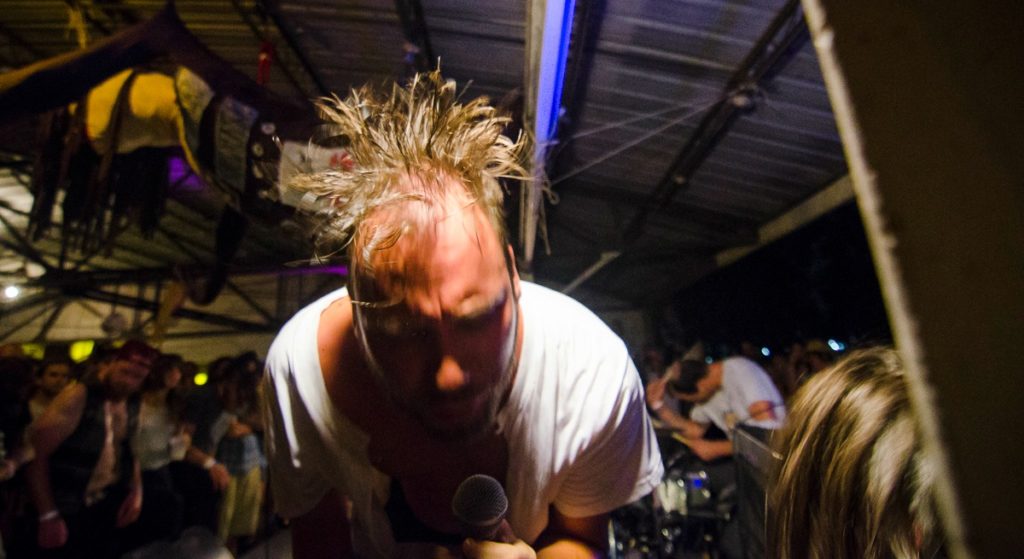 The first Cropped Out Festival in 2010 featured tons of blood, via the guitarist of Animal City botching a trick with his axe, and, well, quite a few dildos. The Sunday night headliner of the second edition, David Yow of Scratch Acid, found himself under arrest by Louisville’s finest. The third one saw a few members of the soon-to-be National Champions from the UofL basketball team wildin’ out along with the punk rockers to The Based God. Those are just a few highlights from an annual tradition already steeped in lore, while letting its freak flag fly high and remaining wholly independent and singular in its vision. It’s rock-and-roll summer camp, packed with friends and some local bands you know, and a lot of bands from all over the country you don’t, topped off with international cult heroes offering up once-in-a-lifetime performances — all at a friendly, no-frills blue collar country club on the banks of the Ohio. After taking a breather in 2015, Cropped Out came back out swinging this year. Kiwi experimental powerhouse The Dead C, a name fans of the noisier end of the rock spectrum might never thought they’d see roll through this part of the world, headlined Friday night, summoning frequencies the human ear was perhaps not supposed to hear. And, on the other side of the coin, Joan Shelley brought along special guest Nathan Salsburg for a gorgeous, intimate, bucolic set of stunning folk. The mercurial Bonnie “Prince” Billy collaborated with heady ambient purveyors Bitchin’ Bajas for a majestic late night set in the Turners’ billiard hall.—Michael C. Powell

After being on hiatus last year, we all gleefully ran back to Turner’s Club for the sixth iteration of the “outsider’s festival.” The usual three-stage event added a fourth this year on the bank of the Ohio River. Everyone was sitting when I walked up to the new “Spooky Beach” stage next to the river. As we waited, Bill Callahan and his two bandmates walked anonymously through the crowd to the stage and prepared to play. Everyone paid full attention to Callahan’s baritone voice, while the sun set behind him. Kool Keith may have been the most anticipated act of Saturday. Every person I talked to mentioned Kool Keith as someone they were going to see that night. It was difficult to tell if it was Kool Keith or any of his numerous personas rapping on stage, but he (they?) knocked out one song after another. There was little need to hype the crowd and talking was kept to a minimum, aside from giving shout-outs to his DJ, InDiana Jones. Lumpy and the Dumpers are a wild, fast punk rock band. They strategized their war path as the set started, turning the show into a combat zone — bodies flew around the tiny little bar room that was stuffed with people either in evasion mode or throwing themselves into other bodies. The band wasn’t safe from the chaos either as people ran through the stage area making speakers sway dangerously. An open knife was also thrown on the floor multiple times. Lead singer “Lumpy” kicked it around the floor with a certain type of shit-eating grin on his face. Even playing through a brief power outage, Pissed Jeans were explosive and utterly fantastic, unless you are offended by a complete lack of regard for personal belongings and safety. Vocalist Matt Korvette took cigarettes from peoples’ mouths, untied their shoes, tore his own shirt almost in half, grabbed me by my head and threw a surprising amount of things at people including guitar cases, mic stands and the aforementioned cigarettes. Nothing was sacred and no prisoners were taken.—Nik Vechery