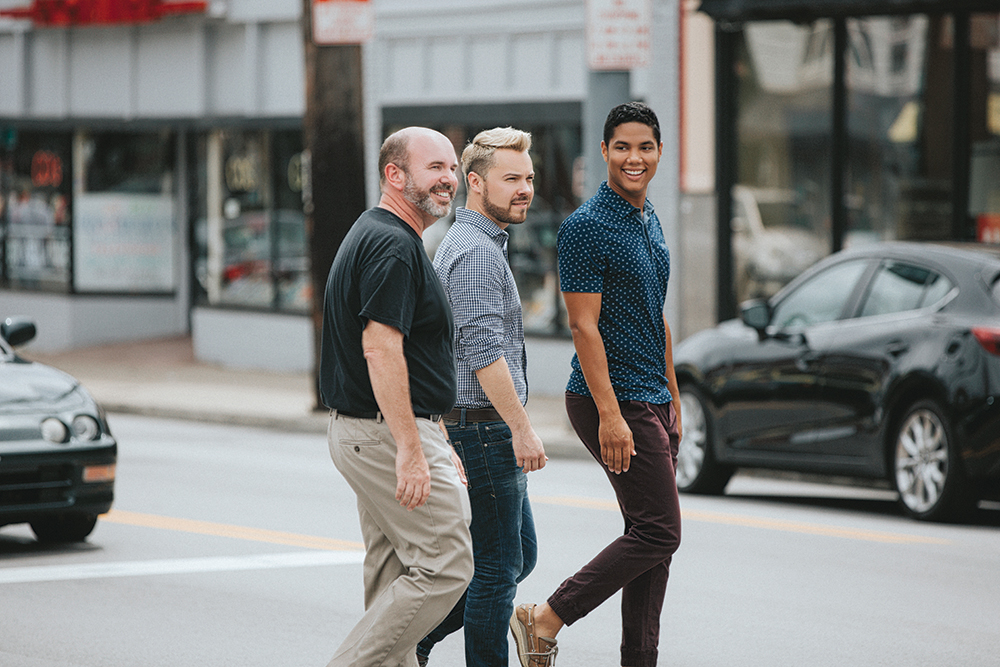 It’s not unusual for a city to have more than one Pride festival. Other major metros in the U.S. host several – and at all times of the year, not just in June. But when Louisville Pride was announced last year – and subsequently held on September 19, 2015, on Bardstown Road – the community was widely wary, wondering if this festival was in competition with the longstanding Kentuckiana Pride Festival – the 16th of which took place June 17-18, 2016, at the Belvedere. And then when Jeffersonville Pride launched its inaugural festival on June 25, 2016, at Big Four Station in Jeffersonville, Indiana, the questions only multiplied. But these organizations do not view the others as threatening or competing; rather, they are working together in positivity to harness their synergy and be the absolute best they can be individually and also as a unified force for the LGBTQ community.

“It’s all for the betterment of the community,” affirms Rodney Coffman, director of the Kentuckiana Pride Festival. “We have been working together from the beginning, respecting each organization and what they can and do contribute to the community.” Coffman became the director of KPF two years ago but has been in Louisville since 2001, advocating for the LGBTQ community and playing a major role in the development of one of the region’s most significant Pride events.

When Louisville Pride Director Thomas Carrier and others began brainstorming the concept of Louisville Pride, which grew out of the smaller Highlands Pridefest, one of the preeminent aspects was ensuring KPF supported the movement and its aspirations. “I didn’t know how KPF would react, but it was certainly our hope and belief that everyone would see that what the neighborhood wanted to do would be something good for our community,” Carrier recounts. “And I personally was confident that when we spoke, that would be more important to KPF than anything else. … From the very beginning, it was our intention to work in tandem with Kentuckiana Pride. I believed it was the only way to provide the best opportunity for us to get the message and meaning of Pride to as many people as possible.”

When Carrier approached Coffman, his response was unequivocally positive. Coffman didn’t hear it as news of a competitor but instead as the sign of the evolving landscape of Louisville – a signal that the work he’d done with KPF was perhaps a genesis of sorts for more, different organizations to follow. “My response was, ‘Why not?’” Coffman remembers. “Several cities have more than one Pride festival. I told him to let me know what Kentuckiana Pride Foundation or myself personally could do to assist. I offered up free booth space for them to promote their festival at our festival and he did the same for us. We wanted to make sure the community saw us as working together, supporting each other and not against each other. We agreed to stand united from the beginning.” 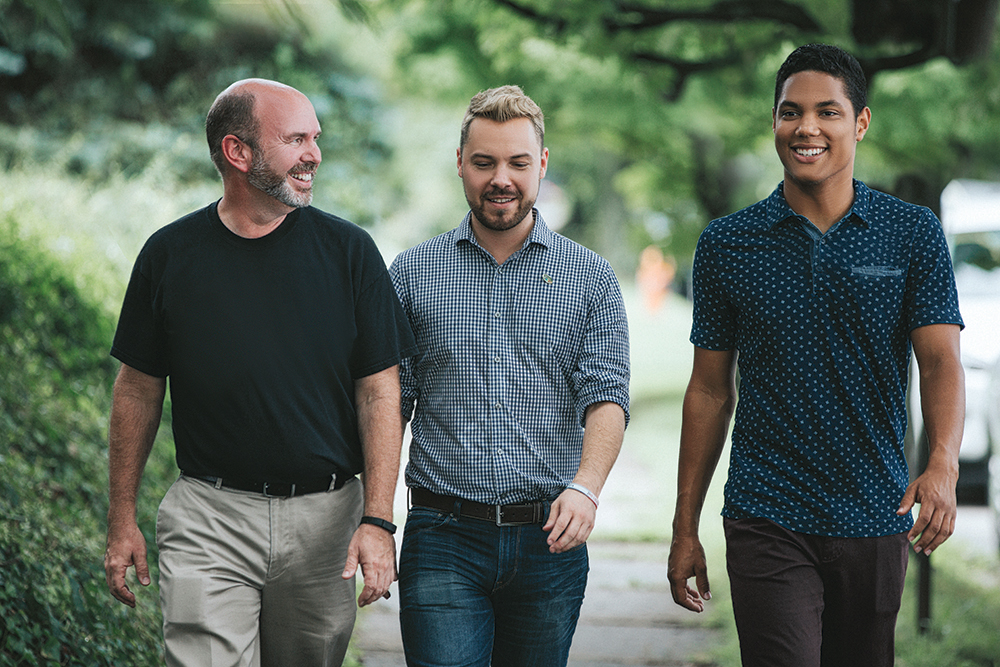 This unity was only furthered when Evan Stoner, director of Jeffersonville Pride, began ruminating on launching a Pride festival across the river. As a young gay man, Stoner noticed how embraced the LGBTQ community was in Louisville and that the city was achieving widespread recognition for its LGBTQ inclusion, such as its score of 100 on the Human Rights Campaign’s Municipal Equality Index, and he had hopes to see that replicated in Southern Indiana. “I envision Jeffersonville, one day, living up to the amazing example that Louisville has set,” Stoner asserts. “The bar is very high. Jeffersonville can be just as accepting as Louisville, and I’m honored to be a part of making that dream a reality.”

Coffman, after having proudly shown his and KPF’s support for Louisville Pride, was similarly enthused to learn of Jeffersonville Pride. “I was happy to see another avenue for people of the Kentuckiana community to express themselves and to celebrate,” Coffman says. “I quickly became friends with some of the members and expressed not only my personal support but that of the Kentuckiana Pride Foundation. I offered words of advice and answered any questions they had because I know the challenges not only of putting on this event but also of trying to grow it from the ground up. I invited Evan to speak at our festival this year to educate, promote and invite the people to their event.”

Carrier, along with Louisville Pride, was equally supportive and saw Jeffersonville Pride as a way to almost immediately pay forward the love KPF had shown Louisville Pride. “Though we ourselves were still learning in the midst of our first year, we sent [Evan] our contacts and resources that we had developed to hopefully give the Jeff Pride committee a head start just like Kentuckiana Pride offered to us,” Carrier describes. “What his team accomplished their first year is really inspiring, and I’m so glad to see some tangible progress on the ability of our community to communicate the message of pride, equality and love.”

Stoner, who saw both Coffman and Carrier as role models, is now able to view them as true colleagues. “I believe the three organizations have tremendous respect for each other,” he contends. “While each event has its own story to tell, we share common hopes and dreams for this community. Kentuckiana Pride invited the Jeffersonville Pride team to walk alongside them in the Pegasus Parade, and Rodney even allowed me to come on stage at KPF to promote Jeffersonville Pride Festival. Both meant a great deal to me, and I think it speaks to just how connected the LGBT+ community is in Southern Indiana and Louisville.”

Indeed, together – as well as separately – these organizations are doing much more than throwing Pride festivals; they are forming a figurative confederation to promulgate change for the future and celebration of the present. In fact, a formal organization with similar hopes, the LGBTQ+ Community Coalition, is currently on the rise to act as a united association of LGBTQ organizations working toward a common goal.

Independently, however, these three Prides are not just about having a good time. These events are about recognizing the ubiquitous love we are so fortunate to enjoy now and anticipating the exciting possibilities that lie ahead. “Louisville Pride is not just a festival where we hope people have fun but a forum for local organizations, artists and families to learn about how we can make Louisville a better place to live for all of us,” Carrier emphasizes.

Stoner has similar thoughts: “Jeffersonville Pride is an organization working in a community that still has a lot of work to do if we want to become one of the most LGBT+-friendly cities in America,” he reasons. “Nothing is impossible, and I’m confident Jeffersonville will be there one day. Jeffersonville Pride 2016 was the first step on that pathway. One day, when Jeffersonville is recognized by the Human Rights Campaign, we can look back on June 25, 2016, as the day the future became brighter in Southern Indiana for everyone.”

For Coffman, the director of the festival that started it all so to speak, the fact that these three Pride organizations are working together is such a testament to the city as a whole. Louisville doesn’t tolerate three Prides – it embraces them. The city has repeatedly been acclaimed on an international scale for its LGBTQ inclusion and how it so genuinely is a place of love and authentic community. And that’s something to truly take pride in.

“I personally feel the community is growing, and what I mean by that is that I feel groups within the LGBT community are crossing the lines more to work together for the betterment of the community,” Coffman relates. “When I arrived in Louisville in 2001, I saw no true unity within the different organizations. It seemed as if they were all doing their own thing instead of teaming up to be a bigger presence. When I took the leadership role of director two years ago, my goal was to try to change that. I know times are different now from 2001, but change is happening. It’s not just from the three Pride groups – it’s also from various LGBT groups that have the same goal, that want to work together to make a better and stronger community for our peers. We are in a time where most people are wanting or are respecting the inclusiveness and diversity within our community. It’s time for growth. Let’s embrace it.”