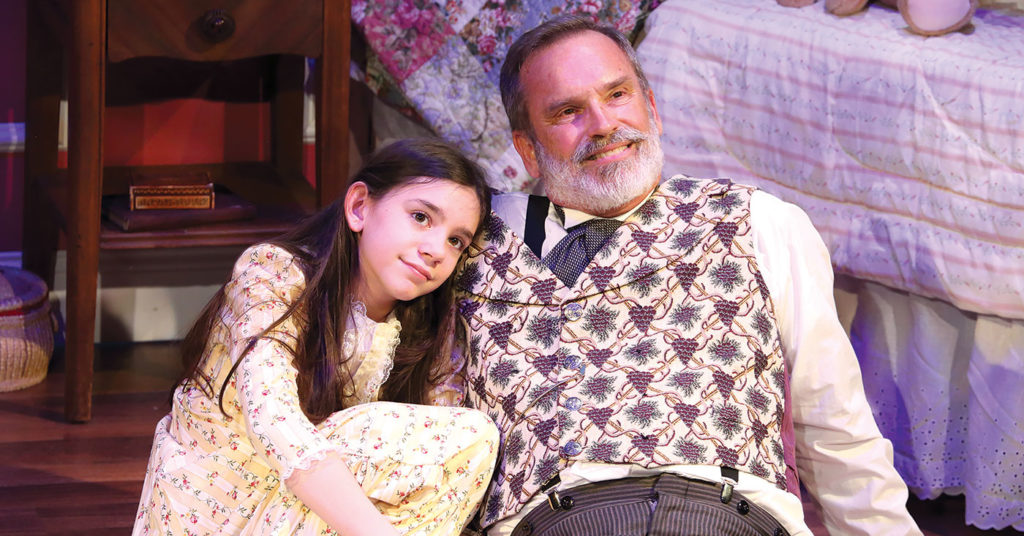 Lila Schaffner and Rick Kautz in 'The Nether'

More than 20 years ago, New Yorker cartoonist Peter Steiner depicted what has become one of the central privacy conundrums of our time. He drew two dogs sitting in front of a computer terminal over a caption that reads, “On the Internet, nobody knows you’re a dog.”

But those problems may someday come to seem quaint — and Jennifer Haley’s 2013 drama “The Nether,” which made its regional premier last week at the Henry Clay Theatre in a Liminal Playhouse production, directed by Tony Prince, delivers a smart, dark forecast that is disturbing and provocative.

In this play, the physical world has become a dystopian nightmare, where things like trees or a garden are luxury amenities available only to the super-rich. Meanwhile, the internet, now known as The Nether, has become a richly-detailed, virtual reality of bespoke realms that cater to any taste. In The Nether, visitors can have — and be, and do — anything they wish. Both of those worlds are well articulated in Eric Allgeier’s sets, Keith Kimmel’s lighting, Lindsay Chamberlin’s costumes and Richard McGrew’s soundscape.

One of those realms, The Hideaway, is owned by a fellow known as Sims in our plane (Papa in his virtual realm). In the opening moments, we see Sims being interrogated by a detective named Morris (Vanessa Miller), because The Hideaway is a pay-for-play operation that caters to pedophiles.

Over the course of the play, the action jumps back and forth between the interrogation chamber and the Hideaway, and the interrogation quickly expands to include Doyle, a teacher who is suspected of being a Hideaway client. In the virtual world, we meet Iris (Lila Schaffner) whose identity is frozen at age 9 because it’s good for business, and a customer named Woodnut (Neil Brewer).

Haley’s script is a marvelous fusion of idea-driven theater and compelling storytelling. On both ends of the interrogator’s table, the central ethical and legal question in the case (whether what happens in The Hideaway is either wrong or illegal) is argued with rigor and intensity — though the effect of the interrogation scenes is diminished by their lack of emotional texture. In the Hideaway itself, the relationships between Iris, Papa and Woodnut is chilling and moving, thanks in no small part to Schaffner’s extraordinary performance as Iris. It’s a superb piece of casting in bold and challenging production from a company that is just starting its second season.

Well, to be fair, there are a few murders and plenty of dark corners in the play, but the breathtaking velocity of this production leaves time for nothing but laughter.

The script, drawn almost verbatim from the Hitchcock original, tells the story of bored everyman Richard Hannay (David Ryan Smith) whose encounter with a mysterious woman — and then a couple more women, all played with gleeful abandon by Zuzanna Szadkowski — leads him into a web of intrigue that propels him like a bullet across the English and Scottish countryside.

Along the way, Hannay (and Pamela, the woman who grudgingly comes to trust him) encounter an outrageous assortment of quirky characters and villains — all played by the Clown 1 (Jesse J. Perez) and Clown 2 (Carter Gill). This is clowning at its breathtaking best. Some of the physical feats accomplished by Perez and Gill amount to full body sleight-of-hand — which I guess could be called  sleight-of-body, except, as far as I know, that particular concept didn’t exist before Perez and Gill invented it. Some of the physical magic happens front and center on the stage and involves astonishing feats of physicality or virtuosic verbal pyrotechnics. Some is aided and abetted by costume changes so superbly orchestrated and executed (by a backstage crew that ought, in fairness, to get a curtain call), that it’s impossible to fathom.

But just as important, all four cast members bring extraordinary verbal and physical wit to their roles. From the moment he introduces himself to us (via an antique film clip that evokes the era), Smith is a perfectly-honed product of the British Empire, right down to the last detail. Szadkowski slides like mercury from sultry, exotic spy to helpful country gal to skeptical, fiercely independent accessory. And Perez and Gill never let up, whether they’re portraying a pair of music hall performers, spies or innkeepers — or cops clinging to the outside of a speeding train that finds the entire ensemble in hilariously-precarious straits. •