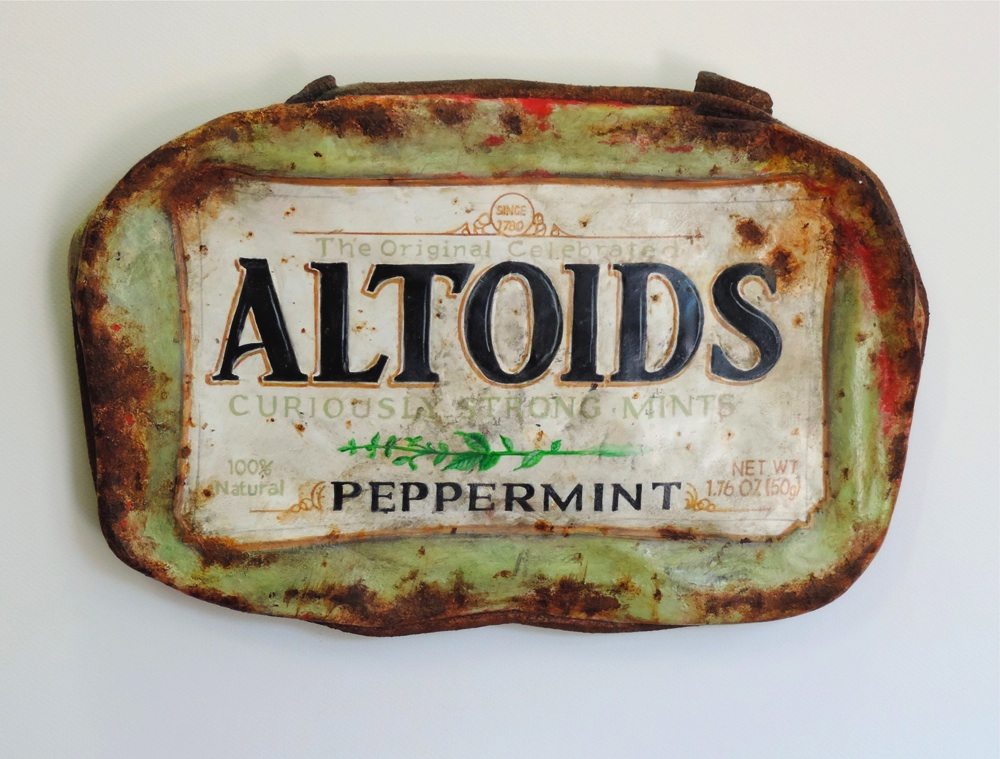 Tom Pfannerstill (tpfannerstill.com) is a magician. His particular sleight of hand is trompe l’oeil, the act of making us believe the art we see is the real thing. But like most magicians, he has many tricks up his sleeves.

LEO: What type of artist are you?
Tom Pfannerstill: I’m a mixed-media artist well versed in many media. I was a printmaker and ceramicist by training, but both of those media required a slew [of] equipment that I didn’t have after I graduated. Much of the art I currently make is a combination of those two media. My pieces are three-dimensional like ceramics and have a strong graphic quality as well.

What type of art are you best known for?
I’m mostly known for small, usually life size, carved and painted recreations of common items I find on the street. I’ve shown them at Galerie Hertz locally, as well as galleries around the country, especially OK Harris Works of Art in New York City, where I had an ongoing series of exhibitions every other year from 1991 until the death of Ivan Karp and eventual closing of the gallery in 2014.

I’m also exhibiting at Gallery Hertz in Louisville in November (along with Caroline Waite). The works I’m making for this show are paintings on panel (very unusual for me, especially after all my talk about 3-D above). They are a series of black paintings — different sizes and different subjects, tied together by predominance of black. They all start out black, and the light is painted in. Some are aerial views looking at city lights from a plane or a high window, some are eye level on the highway [and] others are looking across the river at night. For me, the art comes first and the words later, so I’m not sure what I’m going to say about them. My artist statement will probably be something about my interest in the mystery of darkness, what it conceals and what the light begins to reveal. Aesthetically, I love the brightness of the lights in the velvety black background.

Artists find inspiration from unusual sources. In your case, it’s trash. How did that happen?
I was working on a series of building facades, inspired by the beautiful cast iron facades on Main Street downtown, when it hit me that these buildings from the late 19th century were being refurbished to last well into the 21st century, a span of several lifetimes. It made me acutely aware of the brevity of life and how quickly time passes, and I wanted to make work that reflected that. I did a series of small objects: cigar butts that were the remnant of time having passed, used paint brushes that had a dab of color remaining from every time they were used, wearing their own history in a way, my studio clothes and shoes, well-worn and splattered with paint, and finally the pieces based on the objects I found on the street. These pieces represented a little lifespan of a sort, an object that was created, had served its purpose and was then discarded for me to find. Each one had its unique journey, had been marked by time and the elements, and carried as a reminder of that journey its own particular scars. I see them as a contemporary memento mori, and a reminder that time is fleeting. Not a lot of viewers connect with this message, but it’s where the idea came from and the way I still think about them.

What was the largest display of your work at one time?
I have an exhibition scheduled for October of this year at Cumberland Gallery in Nashville, Tennessee. I have a nice selection of pieces I’m currently working on, plus I plan to show several pieces that were returned when OK Harris closed, as well as several things that were returned when Trifecta Gallery in Las Vegas closed. This means I’ll have more pieces than I’ve ever had on hand at one time, and most will go into this show.

Your art was recently shown in Belfast, Ireland. How did that come about?
An artist friend, Susan Gorsen, traveled to Ireland and Northern Ireland and got to know several artists there. She thought it would be wonderful if Louisville artists could also get to know them, and vice versa, and so, invited them to Louisville. This led to the GreenGrass/BlueGrass/New Grass Project: Irish artists coming to Louisville, and Louisville artists going to Ireland to work together toward exhibitions, to work with local students and for general cross-cultural exchange. This project started in 1998, and several trips in both directions were made in the next few years. Deiedre Robb was one of the artists we met during those trips, and we remained in contact through the years since then. When her studio group, Creative Exchange, planned a 20th-anniversary celebration, a part of that was to be a billboard project, taking art to the people, so to speak. She contacted Susan and me and asked us to send an image of our work to be displayed on a Belfast billboard, and we both jumped at the chance.