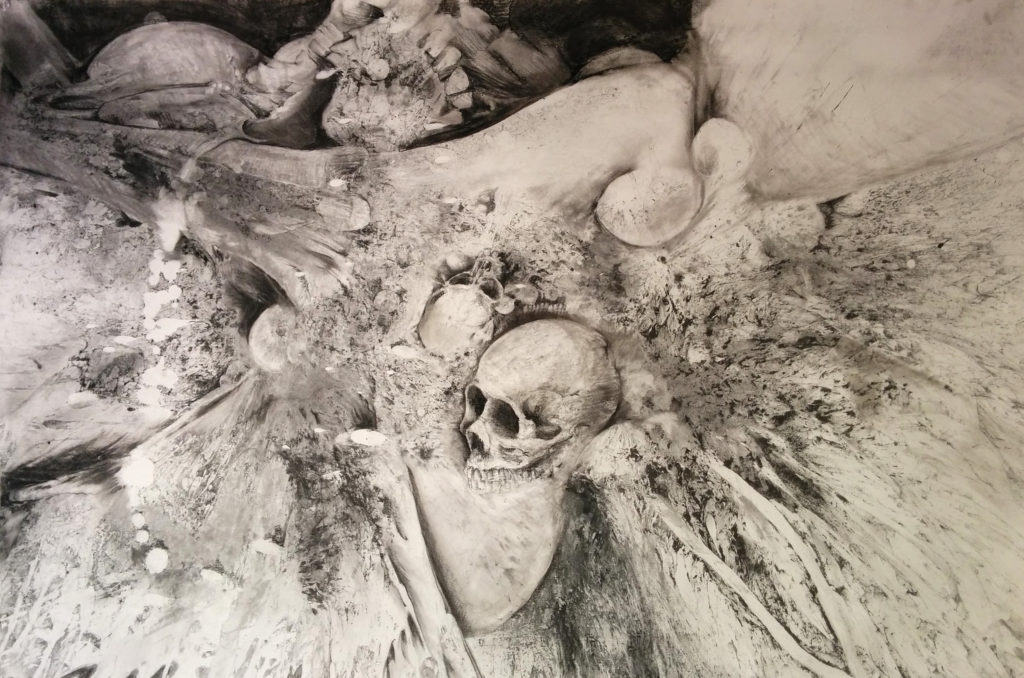 [The above image is “Skulls” by Britany Baker.]

I love artists. They say things like, “The nice thing about predetermined intent is that you can tell how close you are to hitting the mark.” Britany Baker (britanybaker.com) is a creative person, someone who has followed the curvy road of life to end up where she started.

LEO: You work in unusual media. Please explain how you create your art.
Britany Baker: The oil paintings are unusual only in that I didn’t use white paint until recently. I work those with very thin layers of stain using watercolor brushes and let the white of the canvas do all the work lighting-wise. The charcoals, on the other hand, are unusual. Those are done with charcoal powder and water. I lay down a transparent resist with water, sprinkle the page with charcoal powder, and then hit it with water again. Wherever the water hits first, the charcoal floats off and the paper remains white; when the charcoal hits first, a mark is made. The second application of water is the one that really determines the texture. The height, angle, speed and amount of water decide the surface. So, if I pour it low I can determine direction; hit it hard from up high and I can make a splash effect, etc. And there’s a lot that I don’t really control. This all has to happen really quickly. I then go back in and draw with charcoal pencils and/or paint with slurry made from the powder and water. The initial pouring process can be repeated multiple times, but they are very fragile and it becomes trickier as time goes on not to destroy the work you’ve put into it.

How has your art changed over the years?
Well, I hope it’s gotten better. I went to college on full scholarship prepared to make art my life. I got out of college four years later with a BFA in drawing, prepared to leave art behind forever — not the best college experience. I was tired of grayscale — there was no color theory at my school — and realism and constantly feeling judged. I felt I had nothing left to say with art. I had a crisis of intent. But about a year later, there was a week where I counted half a dozen of the “doodles” I was doing with ballpoint pen on napkins hanging nearly everywhere I went. I realized I hadn’t stopped making art at all, I had just changed the format. I bought my first oil paints shortly after that and started trying to figure that out. I decided that my intent could be as simple as deciding to make the canvas better than when it was bare, and that I didn’t need to know where I was going as long as I kept moving forward. My intent became a way of making art and lay in the action of each mark I made, instead of being a thing that I was aiming to achieve. I did scenic painting for TV and theater. I did illustration and graphic design. I painted murals and commissions. But the self-directed art that I’ve been making since college has been essentially abstract — or maybe stream-of-consciousness, non-objective surrealism, what Roberto Matta referred to as “Inscapes.” The rest all felt like work. And most of the art I made, ballpoint-pen drawings and oil paintings mainly, had no erasers, no white paint, no going back. Every mark I made stood. Recently, however, things have changed. For whatever reason, I’ve gone back to my drawing roots and taken up charcoal again. And I decided it was time to learn how oils were traditionally intended to be used. I bought some white paint and a couple books, and I took a workshop and some classes. And it seemed like the best way to gauge my progress would be to work with recognizable subject matter again. The nice thing about predetermined intent is that you can tell how close you are to hitting the mark. And I’m enjoying it again. So here we are.

Art Sanctuary is a group you are involved with. What is it?
Art Sanctuary is a 501(c)3 nonprofit arts organization supporting local visual, literary and performing arts through low-cost studio space, events, promotion and education. We are located at 1433 S. Shelby St. in the Schnitzelburg neighborhood of Louisville. When my husband, Frankie Steele, said he found a building he wanted to convert into a maker space, I think I probably said something like, “You’re crazy —we don’t have any money.” Which was true. But also not the point. He devised a plan to clean up and convert the old manufacturing warehouse space into studios and event space and drew up plans in Sketchup. He put together a presentation and pitched it to the building owner, Dennis Becker. The first completed spaces in the building were my studio and a photo studio for him to shoot in. He worked for months on the project on his own before he started looking for a nonprofit to partner with. I suggested he talk to my friend, Lisa Frye. The two of them have a lot in common — hard working visionaries who hate to hear the word no, and love and support art and the underdogs. She founded Art Sanctuary years before, successfully holding pop-up exhibitions known as Soirees, but the organization had no brick and mortar, and its board was down to two people. Frankie and I joined the board in 2012, and the three of us, together with Scott Slusher, signed a lease as Art Sanctuary. We currently have a seven-member working board, around 30 working artists and 30 performers. I am the vice president, and I handle pretty much everything having to do with visual arts, along with board recruitment and budgets and marketing and things that happen in computers  — we have no staff. You get the picture. We have successfully rezoned the building and are working our way through permitting on the event space now. It has changed my life. I’m so grateful to Frankie for dreaming this thing up and seeing it through and to Lisa and Scott for taking a chance on this. It’s been a tremendous amount of work, but has given me a way to collaborate on what I care most about, and to be surrounded by artists. I feel like I’m on my home planet when I’m there.

What is something most people don’t know about you?
I was a state champion class II gymnast when I was 15. This was where I learned focus, balance and perseverance. It was meditative to me. I quit to get a job and be a teenager. It was one of the hardest decisions I ever made. I still want to do a tumbling pass when faced with a long hallway.

What’s on your art bucket list?
As I mentioned in that whole thing about intent, having a bucket list isn’t really how I’m wired. Or at least it’s not how I’ve been living my life. Maybe that can be the first item on my bucket list: get a bucket list. Incidentally, my favorite definition of the word “intent”, and there are a lot of them, is the medical one: the process by which a wound heals itself.