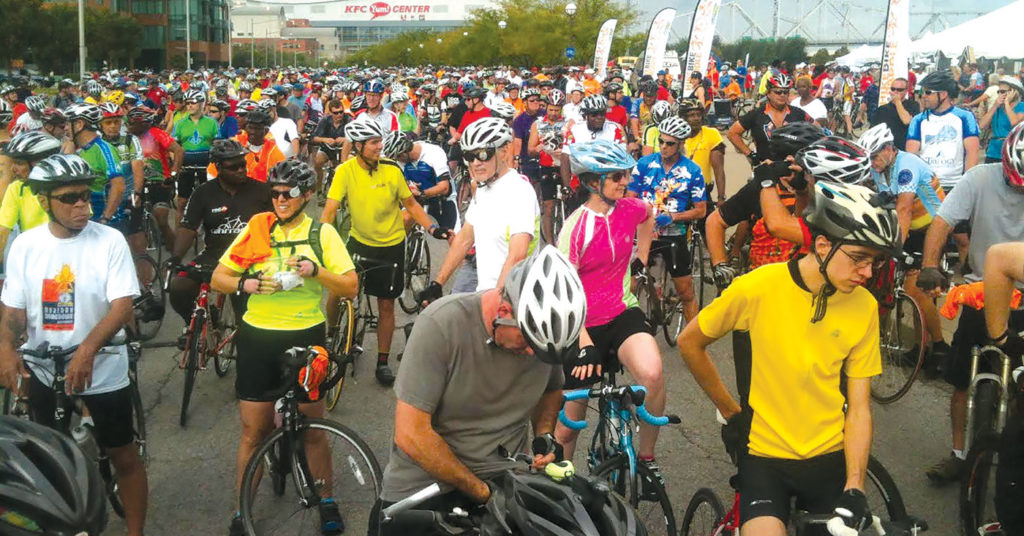 But it could be bigger, better, more fun — and safer.

We show up to ride our bicycles every year, no matter whether it’s dangerous, perfect, slow, fast, crowded or raining, because we have embraced this fantastic party that city leaders have invented for us. It’s socially and physically adventurous and, to many, it has become a reflection of our growing exercise culture here. We want to do stuff! We want to hike, bike, paddle, walk and skate all over this city — and we do.

And I am hugely thankful for this and try to not complain about the confusing bicycle route and safety shortcomings. I’ve had friends differ with me over the event, saying there are just too many kids, or too many people going the wrong way or riding in the wrong lane. Fifteen miles is too short for a route. Some say there are too many beginners riding.

People learn how to ride safely with each other by doing it. Motivating people to get out riding bikes together is a good thing.

The mayor’s ride is many different things for many different people. For some, it’s a human-powered drag race on closed-off city streets. For others, it’s one of many leisurely rides they take year-round. And for some, it might be the only time during the year they ride a bicycle, or when they teach their kids to ride in the street.

All of these — worthwhile!

But certainly, 10,000 people is a lot of people riding together.

See, the bicycle is a precarious vehicle, and mastering it is a challenge and an art. In 2005, the first year of the event, there was confusion about the route, and a lot of mishaps … today, it’s not much different. The Labor Day route is an out-and-back with a loop around Shawnee Park, before heading back to Waterfront Park. With so many people on the route, riders on the return trip begin to encounter riders going the opposite direction and coming into their paths. Approaching the corner at 15th Street and Portland Avenue is horrific, making for inevitable collisions and near-misses on the normally one-way street.

What do I propose to make the event better? How could these events be safer, attract more riders, bring more dollars to our local economy, give cyclists what they want and do more for the growing cycling culture in Louisville?

If I were king of Louisville, I would do this:

Or for something even more exciting, what about a traditional downtown criterium, or circuit course, centered around Waterfront Park?

Open the event and course up at 7 a.m. to sanctioned USA Cycling bicycle races that run until noon or 1 p.m. Invite every bike racing team from Atlanta to Chicago and Iowa to Pennsylvania, food trucks and other vendors. Make a festival out of it, and invite everyone to come watch the races.

After the races, open the course to all riders, like Cyclouvia does for several hours. By 3:30 p.m. or so, the course closes, and traffic goes back to normal.

Louisville is primed for the mayor’s ride to be this and more. All the pieces to the puzzle just need to be put together, into a masterpiece of Louisville cycling culture.

Louisville hosted the UCI Cyclocross World Championships in 2013 and several USA Cycling National Championship road races, criteriums, time trials, and national and regional cyclocross races. The local and regional racing culture and number of teams are at an all-time high. So is bicycle club membership and ride attendance.

The city’s embrace of cycling is fabulous — and a life-and-death necessity.

Almost 57 percent of us were overweight, and 30 percent were obese, when  the 2004 Louisville Metro Health Department, Health Status Assessment Report was compiled. Almost 80 percent were not eating five or more servings of fruits and vegetables per day. Thirty five percent participated in zero physical exercise.

On Memorial Day 2005, something happened that began to change this: Then-Mayor Jerry Abramson and the Louisville Bicycle Club threw the first mayor’s bicycle ride and hike. Jerry had already shown he was a champion of the cycling community, but this was something!

I was convinced practically everyone who had a bike, around 1,500 people, showed up for it. My face was hurting, because I couldn’t stop smiling. Now, 12 years later, Mayor Greg Fischer is carrying on the legacy.