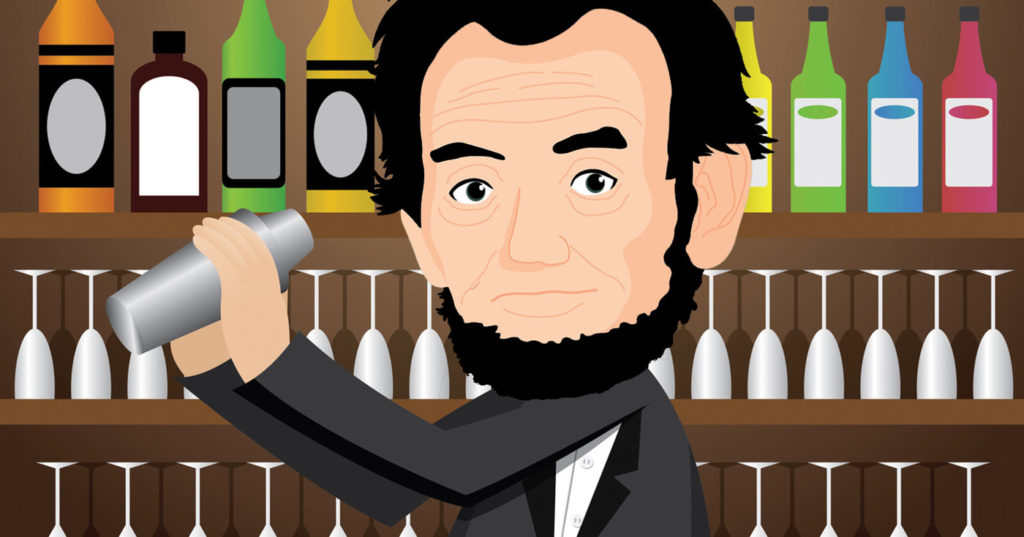 Abraham Lincoln was born in Kentucky, near the town of Hodgenville, on Feb. 12, 1809. He went on to become the sixteenth President of the United States and the leader of the Union government during the American Civil War of 1861-1865. He died on Good Friday, April 15, 1865 after being shot the previous night by John Wilkes Booth. These are all facts that are known and can be documented. Lincoln’s ties to bourbon are not so well documented.

There have been many articles written about Lincoln and bourbon. They tell about Lincoln’s father working for the Boone distillery when they lived in Kentucky. Bill Samuels is said to have the distillery ledger that shows Thomas Lincoln on the payroll, but since this is not a public record available to scholars, this evidence has to be considered a secondary source at best. It is also said that when the Lincoln family moved to Indiana they took with them several barrels of whiskey in order to purchase land. Once again the primary source is not found.

What is known to some degree is the fact that Abraham Lincoln owned a store with a tavern attached to the store. While he was president of the United States, Lincoln was more focused on the war to preserve the Union than on social movements. The president was not a person who used alcohol, but he never openly condemned its use. It is even said that when people complained about General Grant’s drinking habits, Lincoln asked what brand he was drinking so he could send it to his other generals to put some fight into them.

The fact is that most of the Lincoln stories that involved alcohol came about years after his death. One reason for this is that Lincoln was considered a martyr to those people who campaigned for social issues, because he died in the cause of the abolition of slavery. Besides abolition, the other two big social crusades were Women’s Suffrage and Temperance. If the wet forces could use Lincoln in support of alcohol, it would prevent the dry forces from doing the same. It is in the last decades of the 19th century that these stories about Lincoln find their way into print.

A prime example of the Lincoln stories comes from The Louisville Wine and Spirits Bulletin, dated Aug. 1, 1901, page 20. There is a story there telling about a part of the Lincoln/Douglas debates where Douglas said that he had met Mr. Lincoln before at his tavern. Lincoln replies that he does indeed remember the incident and that “It is true that the first time I saw Judge Douglas I was selling whiskey by the drink. I was on the inside of the bar and the Judge was on the outside. I was busy selling, he was busy buying.” The implication here is that the selling of alcohol was more socially acceptable than the purchase of alcohol. It also implies that Douglas was purchasing more than his fair share and keeping Lincoln busy “selling” to him. The industry was trying to paint the picture that producing and selling alcohol is a good thing, and it is not their fault people abused the product.

Interestingly, though, the distilled spirits industry did not use Lincoln in direct advertising of its brands. This is probably because of his status as a martyr in the north and his vilification in the south. Instead there were indirect references to Abraham Lincoln used in the marketing of spirits. When looking at the trademarks registered with Mida’s Criteria in 1900, the researcher will find a “Belle of Lincoln” and a “Lincoln Club” brands. Belle of Lincoln is actually a Tennessee, handmade sour mash, owned by M. J. Levy and Son of Nashville, Tennessee, and registered in 1892. This “Lincoln” was meant to refer to Lincoln County, Tennessee, and not the assassinated president, but it is interesting that the label being trademarked never mentions the county. Lincoln Club was registered by Rheinstrom, Bettman, Johnson and Co. of Cincinnati, Ohio in 1894. It was one of many names they registered at the time, and the name “Lincoln Club” does two things: It brings into play Lincoln’s name and plays up on the popularity of “Canadian Club” whisky, which was well advertised at the time.

Before prohibition, it was more common to advertise using Lincoln in a more indirect manner. A prime example of this is the “Old Abe” brand registered in 1881 by Herman Toser and Co. of Milwaukee, Wisconsin. “Old Abe” was a bald eagle, who was the mascot of the 8th Wisconsin Volunteer Infantry during the war. He was, of course, named for Abraham Lincoln and survived the war and returned to Wisconsin with the veterans of the unit. He was a very popular figure at the encampments of the Grand Army of the Republic (GAR), until his death, in 1881. The trademark includes a depiction of “Old Abe” the eagle.

The indirect references also come in the use of Civil War imagery for the advertising of whiskey. Dreyfuss and Weil, of Paducah Kentucky, registered the brand “Old Dixie” in the year 1892. This trademark depicts Confederate and Union soldiers shaking hands, indicating the war is over and everybody is friends once again and can enjoy good bourbon. The imagery of the war to the 1890s consuming public is, of course, going to bring up the memory of Abraham Lincoln.

Before prohibition it was not easy to use Lincoln’s image in advertising. There were people still alive who remembered Lincoln, and to commercialize his name could offend those people. It is after Prohibition that we start seeing more direct references to Abraham Lincoln in the advertisement of whiskey. This trend actually starts just before Prohibition. In 1913, the Lincoln Highway Association started to promote a route across America from New York to San Francisco, to be called “The Lincoln Highway.” This called for improved roads, paved with concrete, that could be travelled by automobile. The highway, in turn, created a lot of businesses with “Lincoln” as part of their name. It also created a renewed interest in everything Lincoln. Prohibition was in effect when the Lincoln craze was at its height, but when Prohibition ended, the distilled-spirits industry joined in.

When looking at the brands registered with Mida’s Criteria in 1935, there are found the old brands of Old Abe and Lincoln Club, but also some new brands, Lincoln Inn (Distillers Corp. Ltd., Montreal, Quebec) and Lincoln’s Pride (Bridgeport Liquor Co., Inc., Chicago, Illinois). The most direct reference to the Lincoln Highway was produced at the Krogman Distillery in Tell City, Indiana, and was called “Lincoln Trail” bourbon. The advertising for this brand often included a map of the Lincoln Highway through the state of Indiana. An image of Abraham Lincoln was included on the label.

By the end of the 20th century, the Lincoln reference had returned to being more indirect. In the 1960s, Old Crow brand makes use of the Lincoln story about Grant and claim that the brand was Old Crow. In 1992, the Jim Beam Distillery created the brand “Knob Creek.” Knob Creek is the stream of water that runs next to Lincoln’s Boyhood Home in Kentucky. •

[Editor’s note: This piece was provided by The Filson Historical Society, where Veach, a noted bourbon expert, author and historian, was associate curator of special collections.]