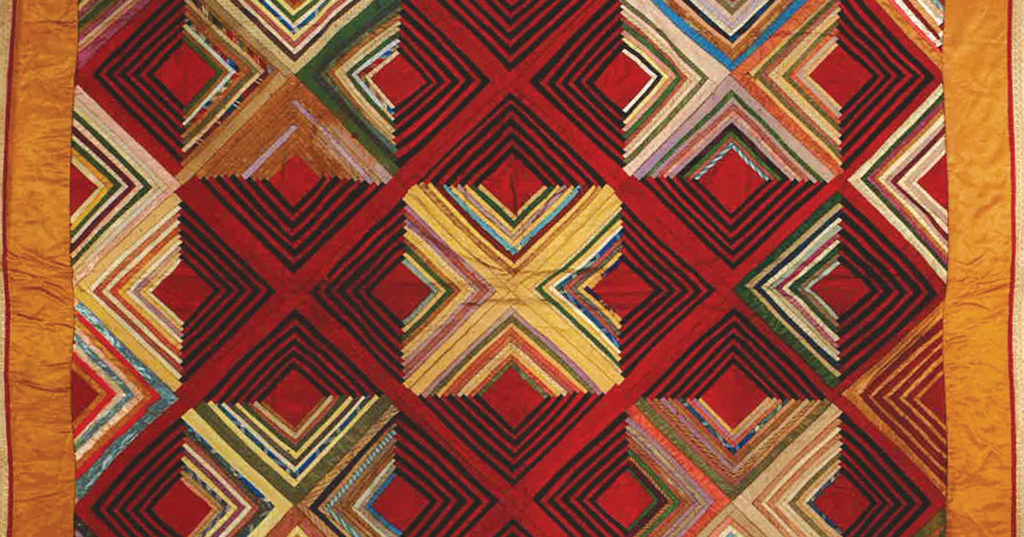 “Kentucky by Design: The Decorative Arts and American Culture” focuses on Kentucky’s contribution to the FAP. Kentucky was one of 34 states that participated in the FAP’s Index of American Design (the Index is now housed at the National Gallery of Art in Washington, D.C.). The exhibition has more than 100 items on display. A standout of the show is the juxtaposition of Kentucky Index of American Design drawing with the actual object.

Traditional quilting is recognized as both a functional fabric object and a piece of art. Whether a hand-stitched original design, or from a pattern and machine-made, quilts are having their day. The 19th-century log cabin quilt in the exhibition, lent by the Kentucky Science Center, by an unknown (probably female) creator is a popular pattern. It is believed it got its name in America when Abraham Lincoln ran for a second term as president.

Another Lincoln is well-respected in historical woodworking circles. Thomas Lincoln, Abraham’s father, was a cabinetmaker. The walnut corner cupboard from around 1814 on display is attributed to Thomas Lincoln and is owned by the Speed Art Museum.

Ceramics were, and still are, popular throughout the United States. J. H. Miller specialized in salt-glaze stoneware storage vessels that were household staples. Miller was good at branding: His pottery was marked in blue with his name and location. Originally from Virginia, he operated a pottery in Brandenburg from the early 1840s to 1884. The collection at the Frazier is privately owned by Jerry McKinley of Shelbyville.

You can’t discuss the history of American crafts without mentioning the religious group called the Shakers. Kentucky had two communities established in the early 19th century: Shaker Village in Pleasant Hill (formerly called Shakertown) and South Union near Auburn. Only Shaker Village remains today, not as a religious community but as a tourist site. Objects lent from Shaker Village are in the show.

One of the Shakers’ creeds was, “Beauty rests on utility. That which has in itself the highest use possesses the greatest beauty.” As a result, their highly-functional, minimalistic style continues to influence artists today.

The Index of American Design closed in 1941. The research was not finished but the lack of federal funding, due to America’s involvement in World War II, killed the program.

The accompanying book, “Kentucky by Design: The Decorative Arts and American Culture,” edited by Andrew Kelly and written by Erika Doss, Jerrold Hirsch and Jean M. Burks, is available in the Museum Store for $50. A symposium featuring the authors will be on Friday, Sept. 16 from 9 a.m.-3 p.m. at the museum.