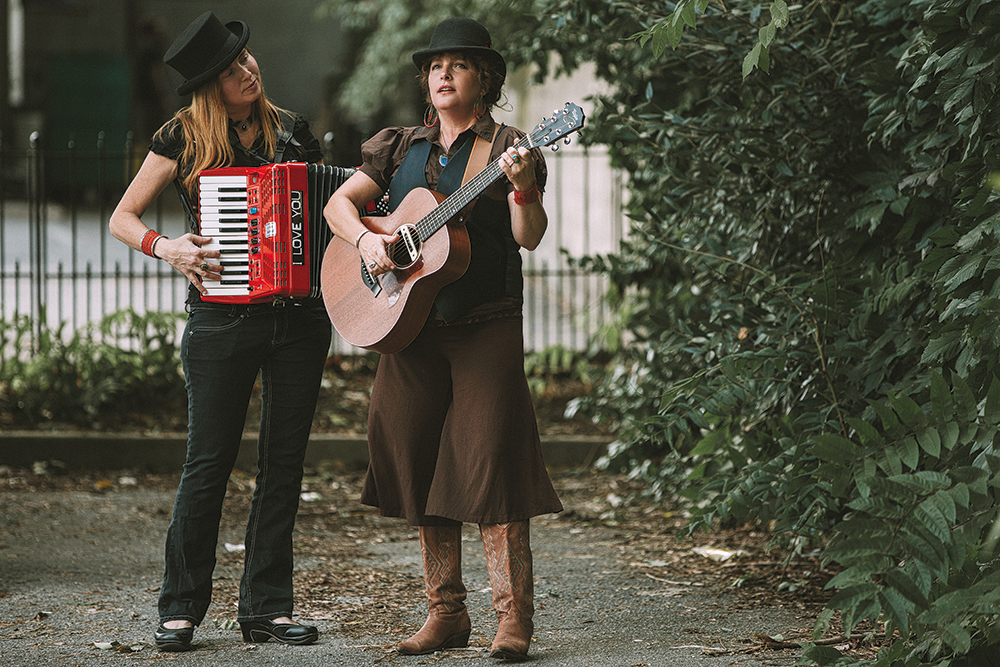 Written by Mariah Kline // Photography by Antonio Pantoja
More than 30 years after their first meeting as adolescents in an Evangelical church, Renee Ananda and Aim Me Smiley have created a life full of love, music and community outreach.

They call themselves the Troubadours of Divine Bliss, a name inspired by their poetic lyrics and their multifaceted spirituality. The Troubadours first became friends as teenagers in a church their families attended. The girls shared a close bond with one another, and their friendship continued even as they went separate ways after high school. In their 20s, the two women bonded over spiritual teachings, sharing books and ideas from different religious texts and mystical poets.

“As we shared these things, we became on fire for life and self-discovery,” reveals Aim Me. “And as we fell in love with life and our spiritual journeys, we also fell in love with each other. We decided we wanted to be together and to do something inspiring and creative together.”

Thus began their musical adventure. The two moved to New Orleans and became full-time street performers, Renee playing the accordion and Aim Me the guitar. Together, they have recorded seven albums and toured throughout the United States, Canada and Europe. They identify their style as eclectic folk-Americana, drawing musical inspiration from their own creative minds as well as the poetic and mystical literature that first influenced their romance.

Today, they play regular shows throughout Kentucky, Indiana and Ohio. They reside together in a cabin in the woods in Southern Indiana where they are able to write and record new music in a place that is all their own.

When it comes to performing, the two enjoy playing smaller venues and what they describe as “back porch settings.”

“We love intimate venues and places where we can tell our stories, open our hearts and really have an exchange with the audience,” describes Aim Me.

A few of their favorite venues to play in the area include Clifton’s Pizza, where they played their very first show; Point Blank Brewery in Corydon, Indiana; and The Bard’s Town in the Highlands.

As for their marriage and romantic journey, these two women are without a doubt meant for each other. Their creative minds and tender hearts have formed a union that absolutely bursts with love and affection.

“We work together very well because we take care of ourselves as individuals and because we feed our spirits both individually and as a couple,” Renee explains. “What makes a healthy relationship is two individuals on parallel paths who are seeking the same thing. We find ourselves inspired by each other’s growth, so working together is this amazing creative combustion. We get very energized by seeing the other come up with a new song, poem or idea for a community project.”

When they met as young adults, they had no way of knowing they would ever build such a life together. But the two firmly believe that their love was meant to be. 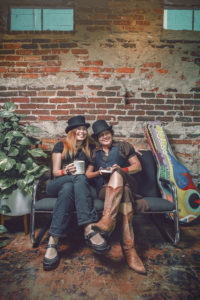 “We work so well together, and we’re so akin and attuned on so many levels,” affirms Aim Me. “What we have is so amazing and special, and I believe that it has to be destiny. We’re both absolutely dedicated to our journeys and our relationship. The running themes for us are, ‘How can I love you better?’ and ‘How can I be more kind?’”

After almost 20 years as a couple, Renee and Aim Me were married on June 26, 2014, the day after Baskin v. Bogan won a favorable ruling and counties throughout Indiana began granting marriage licenses to same-sex couples. They held a reception with many other couples who were just married and spent their honeymoon speaking at the National Christian Feminism Conference. Though the ruling that allowed them to marry was overturned the following day, the couple was still thrilled to be legally united.

“It was such a beautiful opportunity to finally feel like a legitimate citizen of the U.S.,” says Aim Me. “We didn’t have the option to do that when we fell in love in ’95. There’s kind of an honor and a nobility in that commitment, and we so much appreciated that we got to experience that.”

While the duo is grateful for the exceptional life they have, they are no strangers to prejudice and injustice. Early in their relationship, they often felt threatened or shunned by others. They also dealt with the legal and hospital-related issues that so many couples have had to face. Prior to their marriage, their cabin and adjoining land was only in Aim Me’s name, leaving a great deal of uncertainty should something ever happen to Aim Me.

“Though we haven’t struggled nearly as much as others and we were kind of on the tail end of that struggle in the ’90s, there are still so many legal issues to overcome,” Renee concurs.

Though love and dedication are the main components of this perfect match, the couple also works well together because of their common mission: to share love and encourage people to follow their passions. Their mantra as individuals and as a band is, “Free your dream”; the Troubadours want to inspire everyone they meet to pursue what excites them, even if that means taking risks.

“We want to be evidence of two people who freed their dreams,” says Renee, who worked in a corporate office before becoming a musician. “I hear people say, ‘I wish I would have done this,’ or ‘If I didn’t have responsibilities, I’d do that.’ That shouldn’t hold people back. They should start doing more of what they love now, even if they have to do so gradually. Freeing your dream is about freeing yourself from what restricts your dream because ultimately, doing what we love and standing up in our higher purpose is what we’re here to do. Start stepping out of your fear toward what you’re longing to do.”

“Each and every one of us is born with a purpose,” agrees Aim Me. “It’s tied to what we most love to do and what we’re best at. That passion and that purpose gives your life more fulfillment – it heals your soul and helps you connect with a deeper part of yourself.”

The Troubadours frequently communicate this concept during their shows, but the message reaches far beyond their musical audiences. Renee and Aim Me also practice holistic life coaching and hold workshops on freeing your dream. They are heavily involved in the community in both Louisville and Southern Indiana, working with environmental groups, women who have survived abuse, and several other causes.

In 2008, they founded Mighty Kindness, an organization that brings together local businesses, nonprofits and individuals to promote a healthier and happier society. Mighty Kindness hosts a massive festival each year at Waterfront Park that draws thousands of people. Just a few of the groups involved are The Center for Women and Families, Our Earth Now, Kentuckians for the Commonwealth and Louisville Grows. This event promotes buying local, caring for the environment and supporting local artists, all in the name of creating a kinder and more compassionate world.

“We started Mighty Kindness at a time when we felt powerless and frustrated with what was going on in the world between the war in Iraq and the environmental destruction we kept seeing,” Aim Me relates. “We decided we had to build something positive here locally where we had some control. The impact we’ve seen is evidence that our community and our society is hungry for a kinder and healthier vision of what our world could look like.”

The Troubadours of Divine Bliss are an incredibly rare match in that they have built a relationship based not only on love and music but also on loving and serving others. Luckily for us, they have made it their life’s mission to share their music, compassion and, most importantly, their love.

“For us, we feel like we were given this gift in order to show love to individuals, the community and the planet,” Renee explains. “We really pray that we can take all of this love out into the world and give back in any way that we can to show our gratitude.”