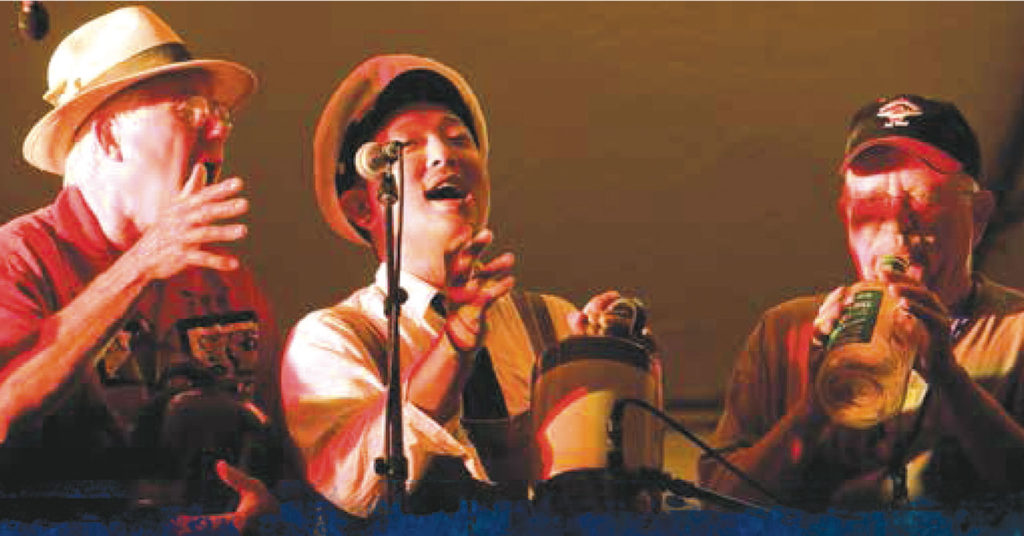 Before you go to the 12th annual National Jug Band Jubilee on Saturday, you should read this excerpt from Michael Jones’ book, “Louisville Jug Music: From Earl McDonald to the National Jubilee:”

“What is probably the earliest published account of the Louisville Jug Band doesn’t actually mention the group by name. On October 20, 1914, the Louisville Courier-Journal reported, “Jug Band Arrested on Complaints Against Noise.” The accompanying article explained that Ben Calvin, John Smith and Earl McDonald were charged with disorderly conduct after residents on Market Street, between First and Second, complained that the three musicians were making noise after midnight. It is doubtful that the newspaper reporter — or the arresting officer, for that matter — even knew or cared that the men were members of the Louisville Jug Band. The group was still ten years away from the seminal recordings that would make its name nationally known and spawn a jug band recording craze.

In 1914, the Louisville Jug Band was just one of many black string bands dotting the South, although it was one that usually played at high-society functions and not street venues. The group was among the earliest and the most successful of the second generation of jug bands that followed the Cy Anderson Jug Band.

Between 1900 and 1930, there were a great number of active jug bands working the streets of Louisville. Researchers Fred Cox, John Randolph and John Harris documented more than thirty of them featuring Louisville musicians. In addition to McDonald’s various outfits, there were Whistler’s Jug Band, Phillip’s Louisville Jug Band, the Henry Smith Jug Band, the Hooks Tilford Jug Band and Charlie Anderson’s Jug Band. Even more bands came from out of town on a regular basis to make some quick money on the streets of Louisville.

“They had a lot of clubs, all the way from Sixth on down to Twenty-fifth, before they tore down Walnut Street,” fiddler Henry Miles told Living Blues in 1982. “Some guys come in here from different places that played harps and like that. Hang out, hit right here, to Sixth & Walnut. That was the headquarters. Poolrooms and them things, and they’d hit right through here, some would get jobs. They’d stay here maybe one or two days and then jump up and go somewhere else. Like the Derby was one reason they come. See, they made good money. They’d make good tips. The Derby, that’s where people from everywhere come to Louisville. White and colored. It’s a money town.”

The musicians who made up the nucleus of the Louisville jug band scene recorded together in various combinations under several monikers: Sara Martin’s Jug Band, Old Southern Jug Band, Clifford’s Louisville Jug Band, the Dixieland Jug Blowers and Earl McDonald’s Original Louisville Jug Band. Jug player Earl McDonald was one of the constants in all these groups. Because of his versatility, McDonald was without a doubt the greatest jug blower of his generation. He was proficient enough in oldtime music and blues music to play with country legend Jimmie Rodgers (‘My Good Gal’s Gone Blues’), but he could also swing in a jazz setting with the likes of clarinetist Johnny Dodds (‘House Rent Rag,’ among others), a renowned Louis Armstrong sideman. McDonald was also a charming vocalist, comedian and bandleader. The music he made was full of vaudeville humor and top-rate musicianship. Jug music is sometimes called ‘good-time’ music because it is celebratory. It is, after all, dance music, and the musicians knew how to move a crowd.” •