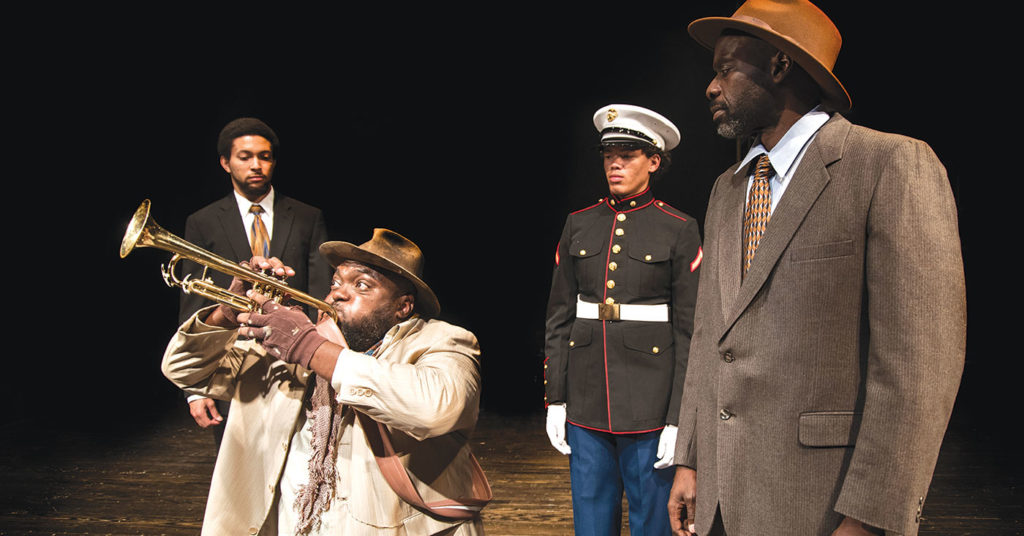 Left to right are James Stringer (in black suit), Joe Monroe II with trumpet, Zach Paul in uniform, and Keith McGill with hat on.

I can’t turn off the social-justice part of my brain when I watch theater, and I doubt that award-winning playwright August Wilson would want me to do so.

Lately, I’ve heard a lot of talk about making America great again, and a return to a better time for our country. In “Fences,” the season opener for UofL’s Department of Theatre Arts and African American Theatre Program, we are taken back to the 1950s, the time in history that a lot of people seem to be talking about when they paint our country’s golden days. The story follows Troy Maxson (Tyler Madden), an aging ex-con trying to raise his family.

American is blooming in the post-World War II boom, but the civil rights movement is still a decade in the future. Working-class African Americans have to work pretty hard, and they don’t get too much to show for it. Troy is a garbage man, and as I watched him struggle, only able to afford a house because of his younger brother’s Army disability check, I thought, “Is this really when America was so great?”

Social criticism aside, this successful production was anchored by strong leads, solid direction and a gorgeous set. Any social commentary is left to the audience to ponder, as Wilson’s strong characters are vividly portrayed with realistic dialogue and very human interaction.

Troy is a giant part. He talks, jokes, cajoles, reflects and anguishes. He’s a man with a past and a life full of regret. It’s a truly great role, and Madden has to give an equally-great performance, or the show is sunk from the first line. He’s up to the task, if a bit young for the part, though that’s somewhat to be expected with academic theater. Madden commands the stage and owns the space, which just reinforces the thematic notion that Troy’s front yard, a scraggly patch of dirt that he’s trying to enclose with a fence throughout the play, is the only thing he can even hope to control.

And about that patch of dirt. The set by Kevin Gawley is impressive in its own right, with the Maxsons’ house reaching up two stories, packed in between two other houses, and with a huge old tree taking up space stage right. That’s all very nice, but what truly got to me was the dirt. The entire stage, the Maxsons’ front yard, is covered in hard-packed dirt. Early in the play, when Troy’s brother Gabriel cuts a little caper, you see tiny puffs of dirt kicked up by his feet.

Later, as the emotional struggles at the heart of the play finally become physical, the dirt from the scuffle rises into the air. It adds a palpable layer to the action, far beyond the simple verisimilitude of a well-realized set.

There are several great performances in the supporting cast.

Rose (Paula O. Lockhart) is Troy’s wife, and she spends large portions of the play reacting, rather than acting. While Troy monologues and pontificates about race and baseball, Rose looks on. She holds her peace while he talks, and then has her say in simpler sentences. It’s not as flashy a role, but it’s every bit as difficult, and Lockhart knocks it out of the park. When she finally blows up and lets it all out in the second act, it provides an incredibly strong catharsis, in a play generally lacking any easy answers.

Keith McGill’s performance as Jim Bono, Troy’s best friend, is even more restrained. Casting McGill was dicey move, but it paid off. The dynamic between Troy and Bono depends on Troy effortlessly dominating Bono. McGill, a regular throughout the Louisville stage community, is always a strong stage presence, and physically a good bit larger than Madden. In the casting room, directors sometimes wonder if a strong actor will be able to give up the power onstage; it’s a task that requires finesse and skill rather than raw charisma. The result here, the smaller actors dominating the larger one, lends added weight to the personal presence of Troy. Like I said, it paid off.

Joe Monroe II turns in an impressive performance as Troy’s younger brother Gabriel. After suffering a traumatic brain injury during World War II, Gabe was left with severe mental and cognitive defects. Monroe clearly put the work in observing a differently-abled person when crafting the physical and vocal aspects of this character.

Director Baron Kelly has paced the action correctly, a tricky feat. It’s gotta keep moving, but slice-of-life dramas like this have long stretches of shit shooting and gabbing which can’t feel rushed. Some of the scene changes stretched a little long for may taste, and contributed to the hefty run-time, right at two and a half hours, but at least they where filled with an excellently-curated sampling of the blues, which reinforced the time period and themes nicely.

And the lengthy run is almost a given with Wilson. He’s never a quick in-and-out playwright. With his realistic pictures of life, you know you are in for a full evening, but if you settle down and take in the rhythms of an earlier time, you’re sure to be rewarded.