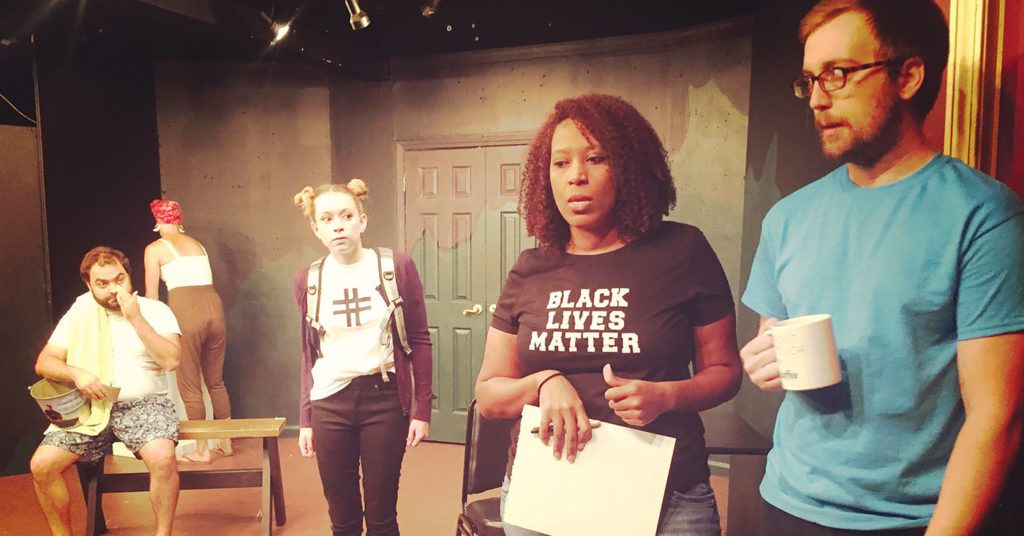 We live in a golden age of brevity. An entire presidential campaign is being waged in bursts of 140 characters or fewer. An enormous percentage of our social discourse plays out as captions and witty (so we hope) epigrams addressing issues of the day. Some of our best fiction comes in short forms.

Likewise, it’s clear that short plays — which might once have been viewed as theater on training wheels — have come into their own as vehicles capable of packing plenty of life and ideas into 10 minutes or less.

The Sixth Annual Ten-Tucky Festival of Ten Minute Plays, a flagship event on the Bard’s Town Theatre’s calendar, is a case in point. This year’s installment features eight inventive pieces filled with all kinds of surprises.

There are plenty of laughs, of course. Gary Wadley’s “A Family Affair,” directed by Jake Beamer, who shapes the action just so, features Seymour (Patrick Taft), a contemporary young man still living at home, who is smitten with a glittering femme fatale (Mandee McKelvey) straight from a TCM classic film. Is she too good to be true? Maybe, but she’s fun to watch, and it’s fun to follow them and Seymour’s parents (Sabrina Spaulding and Jake Reber) down a rabbit hole, as the plot spins in ingenious directions.

Teri Foltz offers us a brilliant twist of fate in “The Off Chance,” a brilliant little romantic comedy directed by Ryan Watson, who moves it along with plenty of sparkle. When we first meet Rick (Tony Pike) and Megan (Megan Adair), it isn’t at all clear that their stars will align, but eventually the signs come clear in a delicious ending.

We get another clever romantic comedy from Courtney Groszhans, whose “It’s Always Something” is directed by Corey Music, who wrangles a cast of seven to good effect. Were they all needed? Maybe not, but this play featuring Tamara Dearing, Megan Adair, Abby Braune, Mandy Elkins Hutchins, Ryan Watson, Scott Goodman and Sabrina Spaulding is pretty much the definitive 10-minute tutorial on how to write a romantic comedy — and you need a crowd at the climax.

Almost from the start, you know how “3000 Words or Less,” by Zachary Burrell is bound to end. But this is another slice of romance, directed by Amos Dreisbach. And the courtship of Wordsworth and Joan (Scott Goodman and Abby Braune, with great cameos from Ryan Watson and Gracie Taylor), is all about verbal economy.

A few of the plays take a more serious tone. “Elephants,” by Jordan Elizabeth Henry, directed by Sabrina Spaulding, delivers a terrific performance by Gracie Taylor as a young girl trying desperately to cling to what she’s lost (with Mandy Elkins Hutchins and Susan Linville).

“Tradition,” by Rachel White, directed by Ben Gierhart, is a bitter Christmas tale that deftly examines the power imbalance between an intellectual husband (David Galloway) and his broken wife (Lenae McKee Price) — an imbalance that abruptly shifts via a bit of night magic in the form of an odd visitor (Will Gantt).

Festival Producer Doug Schutte employs puns and poignancy in equal measure in his heavenly tale, “Ward of the Wings.” Director Beth Tantanella has her hands full with this complicated story about the only unhappy angel in heaven (Jake Reber), his zany angelic foil (Jacob Cooper) and the woman (Hannah Eileen  Pruitt) who can unlock all the secrets (except, perhaps, what happens when an angel uses foul language).

It’s a strong festival from top to bottom, but my favorite selection was Jennifer Donlon’s “Hashtag,” directed by Katye Heim. It’s a bitterly funny skewering of the vapid, fleeting “trends” that slip from urgent to obsolescent faster than #anthonyweiner’s political career.

Here, the story is told by characters who embody the essence of social media. Ryan Watson, whose work as a director and actor is noteworthy throughout the Festival, plays Twitter. Gracie Taylor is Hashtag, an innocent idealist eager to learn what her assignment will be — until the cynics around her explain that she is destined to be little more than an internet shooting star, flickering brightly for just a moment. Rebekah Lynn Dow rings some furious notes as the representative of #blacklivesmatter. Scott Goodman’s portrayal of #icebucketchallenge generates some nice onstage banter. I thought I heard a palpable gasp from the audience when Mandi Hutchins raised the #bringbackourgirls issue. Jake Beamer, who always brings enormous energy to his roles, was flambuoyant delight as #lovewins.

And of course we all know the identity of the most enduring staple of social media, and Abby Braune played #selfie with just the right touch of camera-crazed narcissism — even as she blithely abused her hapless sidekick Duckface (Meghan Logue). •