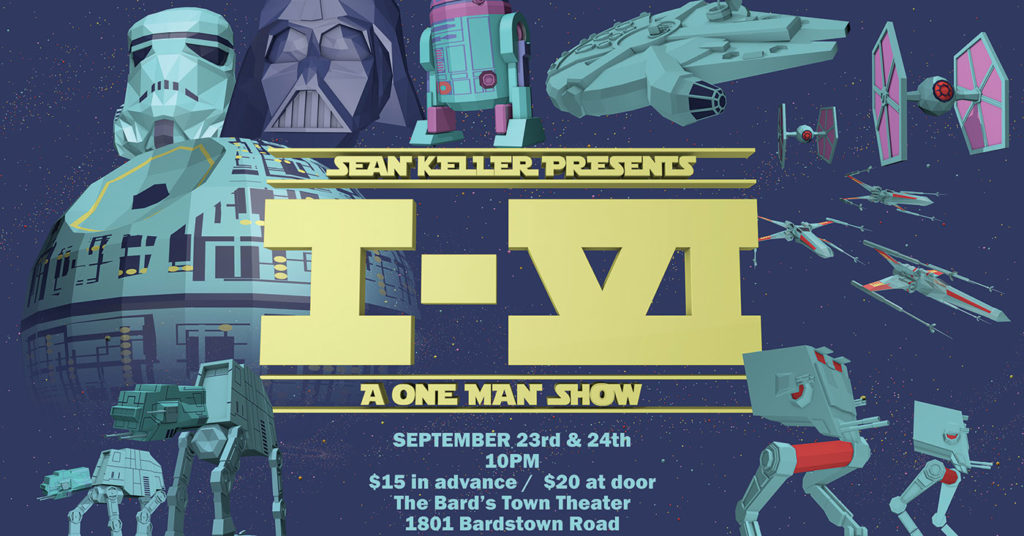 It’s no secret that you’ve been waiting with bated breath for a show that merges the crappy “Star Wars” movies (episodes I-III) with the epic, original trilogy (episodes IV-VI), gives them a bit of an R-rated twist and pares down the cast to just a single actor. You’re in luck — because that’s exactly what comedian Sean Keller has done with his “I-VI: A One-Man Show.” Keller is a talented voice performer, in addition to appearing in many performances on The Bard’s Town’s “Celebrity Roast” shows, and as “Adam Shanks” on the web series “Bagged and Bored.” We met up with him on the patio at Diamond Pub & Billiards to discuss the upcoming show.

LEO: Well start out by telling me about the show.
Sean Keller: It’s ‘Star Wars’ episodes I-VI performed entirely by me. The show is in two acts: Act one is the prequels. Act two is the reason people actually show up. I did want to do the prequels, because there is a generation of ‘Star Wars’ fans to which those are their ‘Star Wars’ movies — and they love them. My generation was horribly disappointed from the get-go, but there’s a generation for whom maybe ‘Phantom Menace’ was their first ‘Star Wars’ movie ever.

What has the source material meant to you throughout your life?
I remember being my daughter’s age [6 years old], and watching the original trilogy on a loop. I didn’t understand all the deeper themes that were being explored and stuff. But the imagery, the music, the laser swords — I was like, that’s it, that’s the universe I want to live in. And then in high school, I found a group of friends who were as obsessed with ‘Star Wars’ as I was. But it’s funny talking about it, because as I’ve grown and, depending on what was going on in my life at the time, these movies always seem to mean something very different to me.

Is it harder to write something wholly original, or adapt previously existing content?
When I first started writing the script for this show, I felt so much pressure that these had to be loyal translations of these films transferred to the stage. But as I got further along, I realized that ‘Star Wars’ fans know these movies. They don’t need a rehash. So as I freed myself from the actual script, the show got so much better and so much funnier. It allowed my voice to be heard through this iconic material.

Would you consider yourself an impressionist, or an actor who can do voices?
I love to consider myself a comedian. I have done dramatic acting before, and it’s great — but I really love doing comedic stuff. I’ve done stand-up. I can do all of the impressions. I can write. But at the end of day, I just like to make people laugh, and all of that are just tools in the belt I can use to accomplish that. So I consider myself under the umbrella of comedian. •