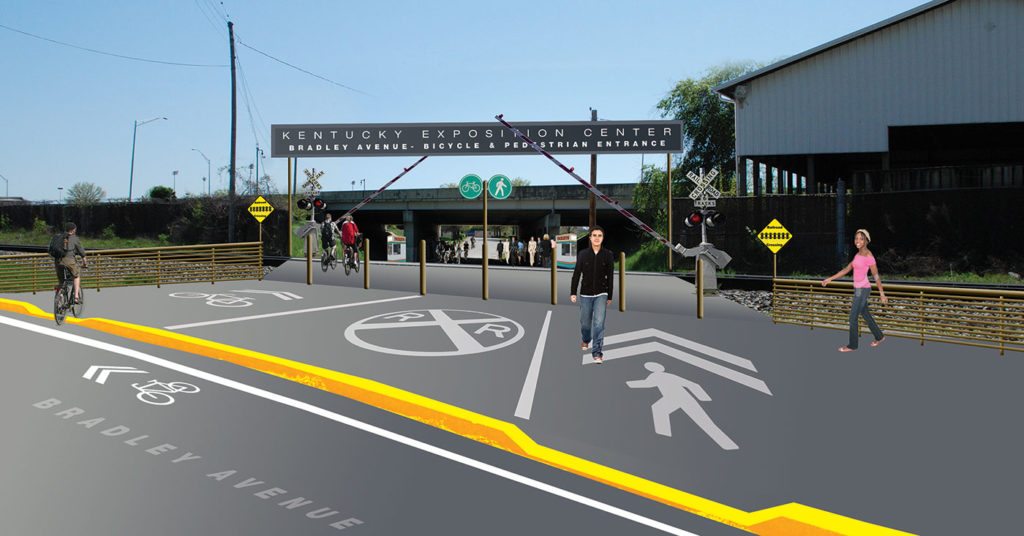 Imagine riding your bicycle to the Kentucky State Fair and enjoying all of the convenience and safety offered to people arriving in other vehicles. People in cars, motorcycles, trucks and even scooters pay a parking and admission fee and then drive around until they find a good parking spot. For several years, that was the case for cyclists, too. There are bicycle racks around the expo center, and, for several years, cyclists were allowed to ride up to the gate, pay admission and use those racks. For a time, some racks were even placed right in front of the main entrance, just steps away from the Freddy Farm Bureau, lemonade shake-ups and corn dogs.

But unfortunately between 2009 and 2011, the Kentucky State Fair decided to end vehicular fairness at the fair. We were relegated to “bicycle corrals”! Chain-link boxes on the outskirts of the fairgrounds property. Just inside the gates of the 500-acre property are now park-at-your-own-risk bicycle corrals far away, across the sea of cars, from motorcycle/scooter parking.

This is not the first time we, the cycling community, have made this request to the board. We would like to renew the conversation.

This week, I asked a fair spokeswoman to respond to our questions and comment, but I have not received a reply.

In 2012, the proposal was met with some open minds, but ultimately the board rejected it. Members cited issues with the Norfolk Southern rail crossing and the burden on residents of the neighborhood, who complained for years about traffic, crime and litter.

We want to keep this dream alive.

The new entrance would safely and conveniently open the front doors of the Kentucky Exposition Center and the Kentucky State Fair to the condensed neighborhoods to the north: Bradley, St Joseph, University of Louisville, Schnitzelburg, Germantown, The Highlands, Paristown Pointe … you get it, basically all of urban Louisville could arrive from the city’s growing network of bike lanes and bike boulevards.

The number of Louisville bicycle riders is growing every year. Metro government is clearly motivating people to get out and get moving, as we were embarrassed by ranking at the top of lists of cities with the unhealthiest populations. I’m seeing increasingly more people at Louisville Bicycle Club rides these days. Evidence of the popularity of bicycling can be seen every morning and evening as commuters use the bike lanes and boulevards through Germantown. More people walking and running.

Which brings me back to the Kentucky State Fair.

We ride our bikes, not only to enjoy the ride, but also for the convenience. We can get through traffic gridlock, and we can park almost anywhere (preferably close to where we will be because in this world it’s wise to do so if you want to keep your bike). Now, I don’t suggest anyone ever ride their $1,000-$5,000 racing bike anywhere requiring a lock, but even a $150 beater bike can get lifted and vandalized. Like if it is in a bicycle corral.

In this city full of bike lanes, with an open-minded city government, it’s difficult to understand such discrimination by the fair. Most places don’t go through as much trouble to keep bicycles away as has the Kentucky State Fair. The fair board can do better.

All board members have to do is comply with the Louisville Metro Land Development Code, which states that bicycle racks shall be “at least as close to the primary entrance as is the nearest non-handicapped automobile parking space”.

Compare the treatment of cyclists at our fair to the reception we get at the Indiana State Fair, which boasts one of the most bicycle-friendly policies nationwide. Its Pedal & Park program offers $1 off admission and free parking if you ride your bicycle, which reduces a lot of parking problems by encouraging those who live nearby to ride with their families. Bicycle racks are positioned along the Monon Trail, an 18-mile, converted rail trail that brings people in by bike from the north and the south. It’s a win-win for Indianapolis.

Yet here we are — another year, and another Kentucky State Fair. We want the Bradley Avenue entrance reopened in time for the next fair, so we can park just like any other vehicle — like we used to.

We, the cycling community, ask you to press the Kentucky State Fair Board to reconsider our proposal. •

Email fair officials to tell them you support allowing cyclists to ride and park past the gates. [email protected]