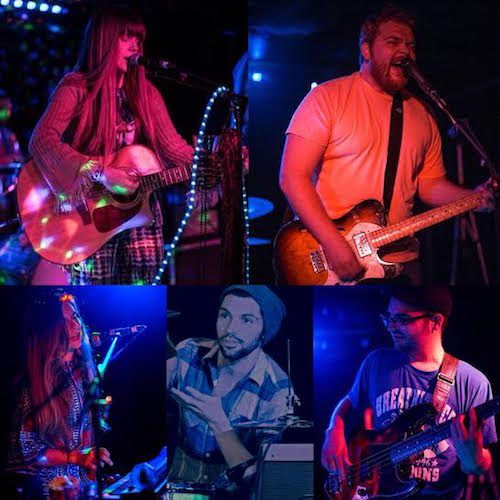 Joann Jene is the lead singer and songwriter for Joann + The Dakota, formed in 2013 with Lyle Edward from Discount Guns, Nick Stinnet from Frontiers, as well as Jason Sturgill and Megan Bridges. Their first album, Junk Drawer, was released last year.

LEO: You are from the northern Indiana town of Hobart, just outside of Gary. Does your northern heritage have anything to do with your band name, The Dakota?

Joann Jene: The band is actually named after The Dakota [apartment building] in New York City where John, Yoko and Sean Lennon lived. I have been a huge Beatles fan since I was very young, and there has always been something about The Dakota that is so intriguing. I love things that are kind of tragically beautiful, and The Dakota encompasses all that — it’s where John Lennon lived and felt so at home, and, yet, it became the scene of his tragic death. I love the haunting juxtaposition of the two — it’s very inspiring to me.

Speaking of northern roots, you have mentioned that your father, Harvey Dickson, got his musical start playing in Gary, Indiana, cathouses. How much of your songwriting is influenced by your geographical and biological upbringing?

My dad has definitely been my biggest musical influence. He has always played music my whole life. He chose to get married and have kids, but he never stopped pursuing his passion, which still inspires me now. He always challenged me to be better but always let me know that he was proud. Since he passed away in October, without meaning to, I have started playing different guitar rhythms and writing songs that I am 100 percent convinced are being channeled to me from him. So in a way, I feel like right now he is influencing my songwriting more than ever. Also, losing him taught me that worrying what others think and being self-conscious is literally a waste of one’s life, so I threw all that out the window.

As being a fan John Lennon, who in solo years used music as a way to work through personal issues, I see a similarity in your songs, especially ‘Happy and Breathe,’ that deal with some dire relationship situations. Does confronting your issues publicly help in overcoming these issues?

As we all know, relationships are extremely complicated, life-affirming and absolutely maddening. Yet, there we all go, over and over again, shipwrecking ourselves against the damn break-wall, so the good must outweigh the B.S., or we wouldn’t keep doing it. Everyone has been through horrible things in their life, and I have most definitely had my share but I am so grateful that I have music to use as an outlet, because during the times I wasn’t in a band, all that energy came out in far more destructive ways. It feels good to sing sad songs from a happy place. Pain has always inspired me more than joy because, if I’m happy, I’m generally out skipping around town and not at home with my guitar. Because of this band, I can honestly say that I have never felt more aligned with my purpose in life ever before and it’s freaking great.

Speaking of relationships, you have just ended a long relationship with your bandmate Lyle?

Yes, Lyle and I were together for three and a half years, and I don’t think either of us would be where we are now without the support and friendship that we have always given to each other. We had a great relationship and continue to, which is why we are able to remain friends, stay in the band together and just keep the awesomeness alive. I stay great friends with almost all my exes and like to joke that I am America’s Favorite Ex-Girlfriend.

Will working with an ex cause you to censor, or shy away from, singing about certain issues that might pertain to the relationship?

Nope. One thing I stand very firmly on is that I will not be ever be censored by anyone, musically or personally. Just the thought of someone wanting to censor me honestly makes me feel like a wild animal cornered in a house with someone trying to poke me with a sharp stick. Recently, I have actually felt like my songwriting is changing. I have been pulling from the present in a way I never have before, and my lyrics and the general feel of the songs have had a much more positive vibe, so we shall see where we go from here.