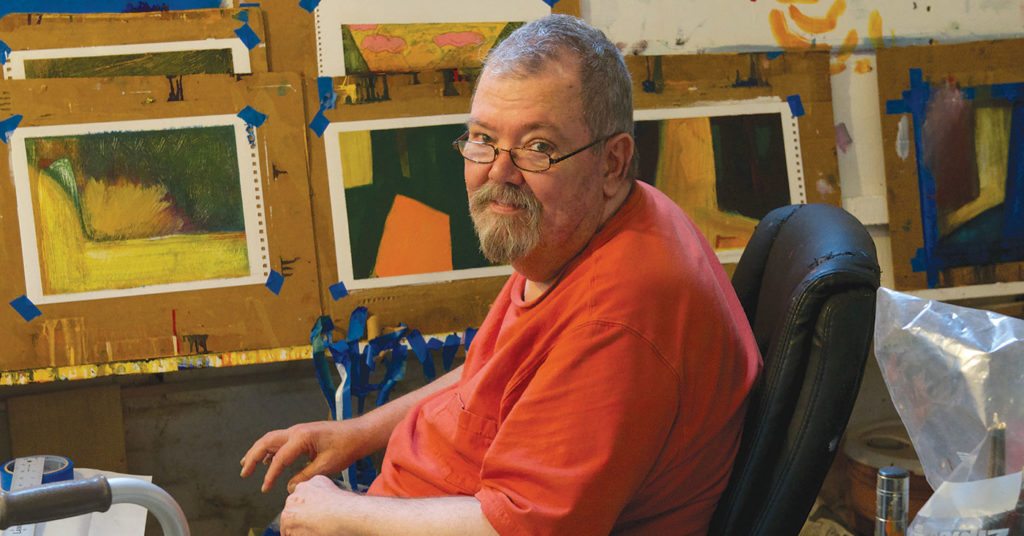 As she sits in Galerie Hertz on a sunny mid-November day, Ann Stewart Anderson watches Billy Hertz painting one of his abstracted landscapes. Both artists were showcasing their work during the 2015 Open Studio Weekend, a fundraiser for Louisville Visual Art and UofL’s Hite Art Institute. But what they’re really doing is talking and keeping each other company. The hours-long event is giving them the chance to catch up.

They talk about the aches and pains of living. Anderson’s conversation with Hertz reminds her that both of them continue to be creative despise adult-onset disabilities. “I personally have thought a lot about Matisse,” she said, “who, when he was no longer able to paint his glorious oils, developed a system of cutouts, which are often considered his most dynamic work.” In her artistic circles, she knows many artists who “are each experiencing a life changing handicap.” To her, it is not what they are dealing with, but how they handle the difficulties. Since art is their constant and not a variable, the challenge is how to continue to create.

Artists whom Anderson knows with chronic illnesses include Hertz, photographer C. J. Pressma, all-around creative Keith Kleespies and herself, a paper mosaic artist. Each were successful prior to the onset of their disabilities. While the cliché “art saved them” may apply, the details of their struggles and how they continue to make art may be one of the more interesting aspects of their life stories.

Anderson, now 81, is a lifelong artist, encouraged by her mother to be creative. Her favorite subject matter is women’s lives, and her work is largely autobiographical. When she went through menopause, so did her art, resulting in the collaborative work “The Hot Flash Fan” facilitated by internationally-known, feminist artist Judy Chicago.

Anderson is working on “Wonderful Old Women,” a series made out of magazine pages (her art is available at Galerie Hertz). “This work continues my engagement with depictions of women … [as they] age with aplomb and grace,” she said. Since she was once a painter and now creates art out of paper, all comparisons to Henri Matisse are welcome.

She was diagnosed with Parkinson’s disease in 2014. It is a progressive disease affecting the nervous system, especially movement and muscles. Tremors are a well-known sign. Most people are diagnosed later in life, after 60. Actor Michael J. Fox, a popular celebrity, is an exemption to the older-onset rule; he was diagnosed at 29.

Louisvillians are familiar with another person who had the disease — Muhammad Ali. He experienced the blank face symptom, in which the face shows little or no expression. Anderson has made expressive masks on the chance she will someday be unable to show emotions.

Because of the losses of mobility and balance that come with the disease, she had to move out of her multi-storied, camel-back shotgun house to a single floor condominium. The house had a large studio so she could oil-paint; the condo does not.

“Although I have not gotten rid of my easel, it is in storage in the basement of the building,” she said. “To be realistic, I will probably never use it again. I had painted with oil for over 50 years and consider myself, basically, a painter. This is a huge change for me.”

Yet Anderson has found that being a creative person has helped her immensely in dealing with her disease. “I am an artist, and what I do as an artist is who I am,” she said. “Working in my studio gives me great joy — joy in a situation which is often filled with problems, despair and aggravation.”

“Making the paper mosaics is a perfect medium for me, because I can be independent,” said Anderson. “I’m unable to write my name, or anything else legibly, but I have no trouble creating small shapes and gluing them to create my women. Fortunately, I do not have a tremor, at least not yet. So this is not a problem for me at this point in manipulating the scissors, glue brush and paper scraps to create the compositions. I’m making work, which is continuing my interest in portraying women at various stages of our lives. And, I have been fortunate to find an audience who appreciate it and support me in my efforts.”

‘Art gets me through the day’

Hertz is a longtime Louisville art leader, painter and cofounder of one of the oldest art galleries in town, Galerie Hertz. The NuLu gallery and shopping area share a history with him, for he was on East Market Street in the 1990s, long before it was fashionable.

Now 69, he was 59 when he found out in a public, dramatic way that he had a benign brain tumor. He was walking in Waterfront Park in 2006 when he had a seizure. Months of physical therapy followed and, a little over 10 years later, he is still unsteady. He must spend many hours a week in a hyperbaric chamber to counteract the necrosis of his brain. But he continues to paint daily, although, as Anderson observed, “He is still painting, but it is a much different process than the one he did before his illness.”

Hertz said the tumor required surgeries and radiation. “What has happened is I have lost some physical motor skills abilities, but, at the same time, my mental focus has increased. So it’s a fair trade off. Actually, it’s better. I’d rather have the motor disabilities than have a decrease in mental capacity, so all in all [it has not] affected me.”

“Art gets me through the day and through the hard times, so I’m extremely lucky in that aspect.”

Unfortunately, Hertz has been taken advantage of because of his disability. After his brain tumor operation and recovery, he took some bad legal advice in the hopes of staying financially strong during his lifelong health issues. He ended up in trouble with taxes and announced earlier this year that Galerie Hertz was on the road to bankruptcy.

But even with this added pressure, Hertz maintains an upbeat attitude. “I take full responsibility for all my decisions,” he said, then taking a few jabs at banks and lawyers by admitting they took advantage of “my Mt. Everest-sized ego.” He has a plan to rebound: In the hope of financially stabilizing the gallery, the goal of selling “100 paintings in 90 days” was started. Hertz is selling his paintings of oil and pencil on gessoed paper soon after completion. Some people, familiar with his talent and reputation, are buying a painting prior to it being finished, or maybe before it is even started. All the while his work continues to be included in juried exhibitions and solo shows.

They don’t call it visual art for nothing. Touch can enable some artists to continue working, but, for a photographer, sight is necessary. Amazingly, Pressma, one of the best photographers in the region, has been legally blind due to diabetes since his early ‘50s, with sight in only one eye and little peripheral vision (he is 72 now).

Many photographers in the Louisville area hold Pressma in high regard as the founder of the Center for Photographic Studies in the 1970s. That is also the time he began his “Night Lights” images, some of his most powerful work (he is a member of the PYRO art cooperative).

“In one way, I kind of see like a camera sees — in two dimensions with the focus on what is straight ahead,” said Pressma. “I guess that has influenced my art, but I have been this way for so long, it is hard for me to say. My way of seeing and looking for pictures is very deliberate, and I have to point my head straight at the subject. I can’t remember when this has not been the case. Does that change my art? Probably it is an advantage, because of my ability to concentrate and define what I am after.”

Because of balance problems and his lack of vision, he can’t drive. Yet his legendary concentration helps him to get the photographs he seeks. “Several weeks ago, I returned from a trip to Israel and Jordan,” he said. “In driving along with a guide, I very deliberately focused my attention on the side of the highway. Even with the speed of the car, and my lack of peripheral vision, I spotted two spots that I just knew I wanted to return to. On our way back to the Jordan border, I was able to describe the sites and asked the guide/driver to specifically stop [there]. My wife and guide were amazed that I could spot the two. I do know what I want to photograph, and, because of my poor eyesight, my attention is very focused.”

“My disability has been a very positive influence on my art making,” Pressma said. “Yes, it is very frustrating at times, but life is filled with frustrations — so what! … My parents developed in me a very strong and positive self-image, coupled with a need to be very independent. I never accept the idea that I can’t do what I want to do. I simply figure out how to do it.”

He has another trip planned, photographing the “Before I Die I Want To …” walls popular in urban areas (the Speed Art Museum had one when it was in NuLu). Since he will be going from city to city on Amtrak, Pressma has also decided to do a project on train travel. “So because of my disability, I get to see things and investigate places I would have never gone to.”

Another artist with a sight-related disability is Kleespies, a former filmmaker. Now 71, he was diagnosed with macular degeneration in 2003. It’s led him to “losing that part of my eyes that can focus and register fine detail. I can no longer see where the end of a pencil, pen or paintbrush is.”

The disease affects the central part of the eye at the retina, causing blurriness and black areas. Unfortunately, it is age-related (most people are over 55 when diagnosed), incurable and the leading cause of vision loss in America. Sufferers have trouble reading, driving and, especially bad for an artist, seeing colors and details.

The gradual symptoms have left Kleespies with a right eye that has no central vision and a left eye that is only slightly better. Yet he has retained his peripheral vision.

A renaissance man when it comes to art — “I don’t think in terms of labels” — he prefers to call himself the broad term “artist.” That leaves him open to creative possibilities and embracing “new media, so I am finding new expression by making images with an automatic camera,” he said. He’s not represented by a gallery, nor does he have any upcoming exhibitions, although Chuck Swanson of Swanson Contemporary wants him have a show.

But, Kleespies said, “I don’t believe the capitalist manufacturing model serves art well. All you get are art fairs and ‘Tin Pan Alley’ glitz. Off the grid, art can go deeper, breathe, live.”

At this point in his life, art is what he does for himself.

After we talked, Kleespies emailed me with good news. “Monday [Aug. 8] I will go to the Cincinnati Federation for the Blind offices to try out a new eyeglasses-mounted smart camera that will read aloud to me, identify faces (a big problem socially!), and identify objects. It will take a lot of the work out of faking it.”

Perhaps Kleespies sums it up best: “I am so lucky to be an artist in this situation. The job of artist is one of discovery in creating new, personal worlds. An attitude of adjustment and adaptation is natural to the artist, so dealing with a handicap becomes creative play and fun.”

Art. It does a body good.