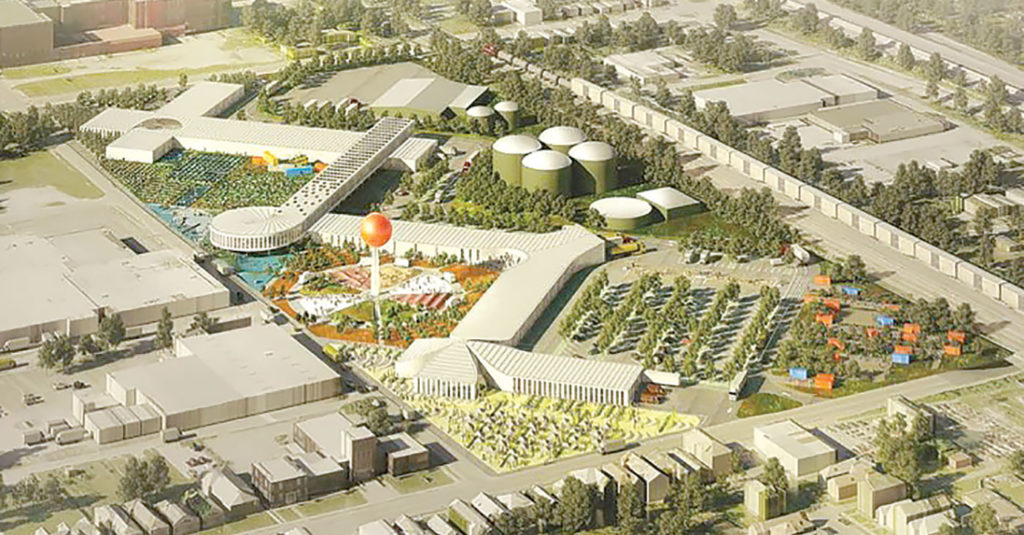 The West Louisville FoodPort had unique potential for Louisville at-large and would have been a catalyst for other positive developments around the site between West Market Street and West Muhammad Ali Boulevard. I’m sorry that it will not go forward. That said, the project’s cancellation gives a new opportunity to listen more open-mindedly to the surrounding community. The neighborhood had already expressed concerns about the activities that FoodPort would bring to their community, and they should now have a greater voice in any subsequent proposals for the site.

The site has unusual constraints. The significant rail corridor and the Shawnee Expressway (I-264) to its west means that reconnecting the street grid through the site would not provide meaningful neighborhood connectivity. For better or worse, this will remain a very large parcel.

So, what — other than a large industrial development — could be appropriate?

A soccer arena for Louisville City FC has been suggested. I expect that — like FoodPort — such a proposal would face criticism for being a development desired by, and imported from, outside, not one intrinsic to Russell, or necessarily supportive of the neighborhood’s needs.

If there is any one thing that is demonstrably lacking in the area, it’s easily-accessible park space for the immediate community. If you look at a map for parks and green spaces that can serve Russell’s residents, you’ll see that their options are limited. Shawnee Park is farther west — a big anchor of the city parks system, sure, but it is 13 blocks at the closest point and upwards of 20 blocks from most of Russell’s residents. You probably wouldn’t walk or bike there. The much smaller E. Leland Taylor Park is to the northwest in the Shawnee neighborhood, but, like Shawnee Park, it’s cut off from Russell by I-264. A couple of larger green spaces are afforded by cemeteries in the neighborhood. Elliot Park and Westonia Playground are both very small. At risk of adding more burden to the already-underfunded Metro Parks, possibly the most transformative use of this 24-acre site would be provision of exciting recreational park space for Russell residents.

Obviously Metro Louisville had its eye on a revenue-generating use for the site, not another Metro-maintained amenity. And that’s right: Russell needs economic activity as much as it needs park space. An optimistic view would be that a park wouldn’t just enhance the community but would also catalyze nearby business activity. There’s no certainty this would happen.

Is a park something the neighborhood would welcome? Or do the residents see that the site could serve other needs better? They’d have to be asked — and be at the table as it develops. •

Ward, AIA, is an architect and LEO’s architecture critic.