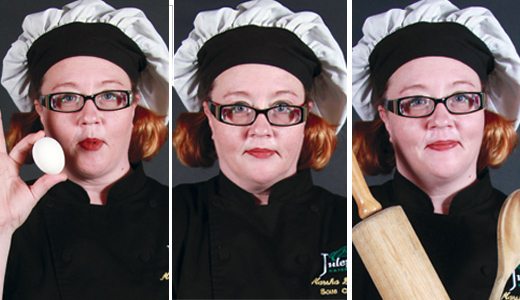 In every restaurant, there’s a guy who washes dishes. In a busy spot, it’s a whole troop of guys (and sometimes girls). To those of us who are lucky enough to have a line cook or prep cook’s position, these workers are our heroes.

Morning dishwashers come in early, usually before the cooks. They fill bins with ice, set out the plastic pans for our mise en place and put bags in our garbage cans. They run steaming-hot sinks full of soapy water and cool sinks full of blue sanitizer solution. They mop up last night’s footprints and turn on the convection ovens, the lights and the hood fans.

In the ramp-up to lunch service, there’s a lot of prep, so there are a lot of prep dishes to wash. Sheet pans marred by roasted peppers or mushrooms have to be deglazed and scrubbed with stainless-steel scouring pads. A giant pot of creamy grits was saved from tasting scorched by a cook who was smart enough not to stir and scrape it, but the pot still has to be relieved of the scorched layer on the very bottom, and there’s no sand-blaster at hand. It’s all elbow grease, courtesy of the dishwasher.

There’s a perception out there that being a dishwasher is the lowliest of positions. You may have rolled your eyes at the idea that the son of a friend is washing dishes. To be fair, it is normally a low-paid position. Dishwashers don’t get tips. They slave all day in humid conditions. They have the option of wearing a cloth apron, which gets soaked with hot water immediately, or a cheap plastic apron (or sometimes a pricey leatherette number!), which creates a sort of surface-of-Mercury-plus-cappuccino-steam temperature situation on their midsection.

They rarely complain. Those who do, don’t make it.

During and after lunch, there are service dishes to address. So many plates, bowls, sauté pans, ramekins for dressing and sauces, and, of course, all the cutlery. Somehow the dish guys and girls plow through it all.

Some dishwashers are in recovery from substance addiction. It’s an entry position for them to start their lives over. They are eager to prove themselves and often hope to move up in the kitchen echelon, first by peeling potatoes, and later by being taught finer skills such as butchery and pasta fabrication. The good ones move up, working prep, pantry and sometimes all the way to line cook, and even to sous-chef positions.

Fabulous dishwashers do get a few perks. When we cooks accidentally make more of a dish than was ordered, or a slightly-flawed dish that can’t be served, we’re not allowed to eat it; we serve it to the dishwashers. I’ve worked in restaurants where, even if we cooks were starving, dishwashers were allowed to order anything they liked off the menu once a day. I once worked a hellish pre-show shift at a place where I saw the chef slip the lone dishwasher not one, not two, but three hundred-dollar bills during the course of an evening — because he was doing an awesome job keeping up with all the plates, saucers, bowls, coffee cups and glasses that were coming his way.

At the end of the night, the p.m. dishwashers are the last to leave. While the cooks are outside having a celebratory, shift beer in the smoking area, the dishwashers are often still inside, swabbing prep tables, cleaning sinks and putting away pots, pans and plates. They sweep, and they mop. They take the garbage out to the dumpster. They try to get done in time to make that last bus — or, otherwise, beg rides home from their cook friends who have cars. Their hats come off, and their hair is a sweaty mess. They drain that last cherry Coke, or ginger ale, from the fountain before the manager turns the key on the drink machine. They bum cigarettes from each other as they walk outside.

We cooks couldn’t accomplish a damned thing without our dishwashers. We all know how to wash dishes, and often do, but when we hear a dishwasher has called in sick (and it rarely happens), a sense of dread and panic kicks in. What will we do today without our regular dishwasher No. 1?

In the end, they are our heroes, and we cherish them. Dishwashers, we salute you. •