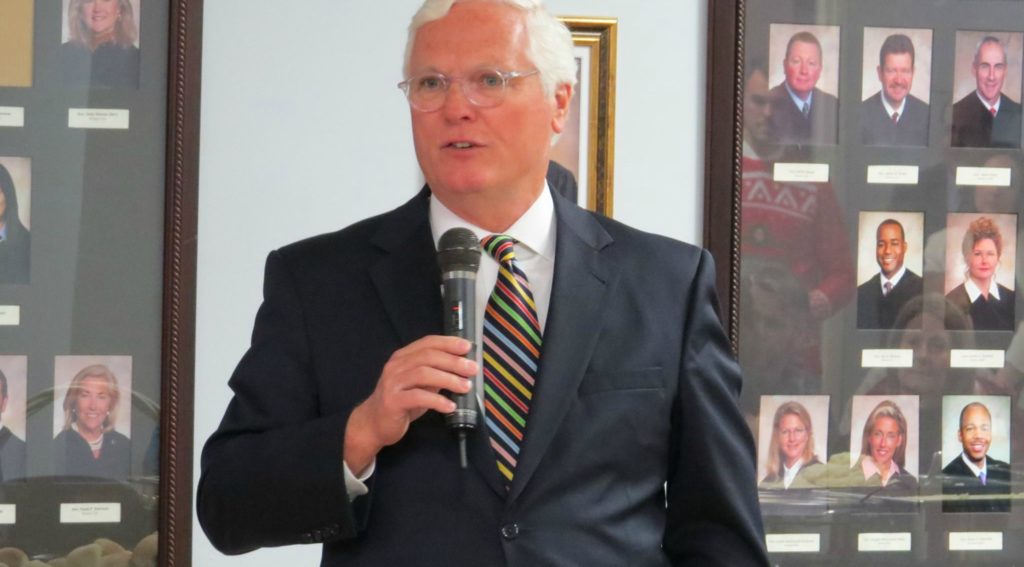 Several business groups are challenging Louisville Metro government’s move to raise the minimum wage for workers in the city.

The law was passed in late 2014 — making Louisville among dozens of cities nationally to have hiked the minimum wage — and two of three scheduled increases have already gone into effect. Arguments, pro and con, were made before the Kentucky Supreme Court in June. Jefferson County Attorney Mike O’Connell answered LEO’s questions about the lawsuit and his support for the new minimum wage:

O’Connell: One of the strongest arguments we’ve made to the circuit court and to the Supreme Court is that we believe section 83.410 of Kentucky Revised Statutes, which is titled home rule, granted the authority to a city like Louisville to pass ordinances and to do things that are particularly useful and necessary in an urban city the size of Louisville Metro.

Sometimes when attorneys are arguing legal matters with court, they’re trying to determine what a statute means and what the legislative intent is for a particular topic; they have to be creative in trying to discern what that is. However, the home-rule statute, which has been in effect since 1972, is as specific a statute as I’ve ever seen written, explaining the intent of the legislature passing it.

What does it say?

Section 4 of KRS 83.410 says, “The powers herein granted are based upon a legislative finding that the urban crisis cannot be solved by the actions of the General Assembly alone and that the most effective agency for the solution of these problems is the government of a city of the first class” — that’s Louisville. “This legislative finding is based upon hearings held by the General Assembly and the conclusion of its members that conditions found in cities of the first class are sufficiently different than those found in other cities to necessitate this grant of authority and complete home rule.”

With that as a basis, we so advised Metro Council that we believed under the home rule authority the Legislature granted, that they had the authority to pass the ordinance, which they did. That was upheld by the Jefferson Circuit Court and then the matter went to the court of appeals, who deferred to the Supreme Court.

The plaintiffs challenging the ordinance disagree.

The position of the plaintiffs in the case — the lead plaintiff is the Kentucky Restaurant Association — has been primarily that they believe the issue of wages is, what we call, preempted by a statute term, such as the state occupying the field to the exclusion of any other legislative bodies. That’s pretty much their argument — that Metro Council did not have the legal authority to pass such an ordinance that dealt with wages. We respectfully disagree and argued that to the court. We believe that what state law does is set a minimum wage of $7.25, which is solely based on the federal minimum wage and that under home rule we could increase that by legislative action here locally.

You have no idea when the Supreme Court is going to decide on this?

We’re hoping to get something in the early fall. The first two increments have gone into effect and it doesn’t look like people are leaving the county in caravans because of the increase of the minimum wage.

Is there a weakness to the city’s case?

We don’t believe so. We believe it’s pretty clear. We obviously defer to the court in all respects.

This law seems to matter a whole lot to you.

It really does. I think it’s a great thing for our community, and it is long overdue. I applaud the council and those that supported it for passing it. It is the right thing to do.

Does it put you in touch with any times in your life when you weren’t an attorney and weren’t making a whole lot of money, and maybe no one in government was looking out for people like you?

The difference in my situation is when I was working for hourly wages, I was single, and you don’t have those obligations that go along with family and marriage and children. As you mature and do have those, and you see how people struggle, particularly today, it makes a huge difference.

My big story is lifeguarding at Lakeside my first year when I was 16, I made $1.25 an hour. The next year they increased it 5 cents. A different time. I was fortunate that I did not have the struggles that many people in this community have as I progressed through my education and my work career, but I have been around it through being a judge and presiding over family issues in courts and in the criminal law side of things. With the economy and things going on today, there are so many people living in chaos and trying to get by. So this is a big deal. A big deal. It’s critically important for working families, especially single mothers.

It’s not enough, but it’s a great start.

LEO contacted Greater Louisville Inc., the city’s chamber of commerce, for an interview with CEO Kent Oyler. The group and Oyler publicly opposed the ordinance as a potential job-killer.

“I don’t take lightly my position, and GLI’s, that raising the minimum wage locally is not only outside the legal authority of the city, it is also harmful to the business climate of Metro Louisville. But that should in no way imply that GLI or I are for perpetuating low pay for workers in our community. In fact, the two issues are unconnected and that makes a ‘split the baby’ compromise inappropriate …”

“… The raging minimum wage debate is beginning to highlight that the real issue is not a wage gap, but a skills gap. How is it that so many people now relegated to working lower wage jobs did not receive the soft and hard skills they need to advance themselves and better support their families, and in the process earn more than a low or minimum wage? This isn’t a business failure, it is a societal failure, and it needs to be addressed. At GLI we are working hard every day to support the creation of jobs; well paying jobs in companies located throughout the region. And guess what? It is working. Companies are creating more and more jobs, and most of them pay more than $7.25. But our community and its institutions are not generating the corresponding number of people that are prepared to fill these openings.  That leaves many people to fill the lower wage jobs (which beats no jobs) until they can gain skills to move up to better paying positions. Let’s end this discussion about eliminating lower wage jobs by artificially raising the floor and start talking about how to help more people gain the skills they need to earn better pay.  That’s the kind of change both the business community and Metro Council can agree on.”

To read Oyler’s full post, go to greaterlouisville.com and search for “minimum wage.”

LEO asked the Kentucky Restaurant Association, one of the plaintiffs challenging the minimum-wage ordinance in court, for an interview, but officials declined.

“The Kentucky Restaurant Association opposes the minimum wage increase adopted by the Louisville Metro Council (as well as that adopted by the Lexington-Fayette Urban County Council) as a matter of principle over the proper exercise of local government authority in matters that have been comprehensively regulated by the state legislature. This includes any attempt at local wage and hour regulation of non-governmental employers, including the private sector businesses the KRA represents. Should local governments be permitted to regulate private businesses in this manner, it is likely that they would not stop at minimum wage increases, but could adopt any of the range of measures seen elsewhere, including ordinances mandating private sector employers to provide paid sick leave and healthcare benefits, as well as limiting employer discretion in employee scheduling, part-time work, and even restrictions on the at-will employment arrangement that has long prevailed in this and virtually every other state. The KRA is greatly concerned that such measures, adopted on a piecemeal local basis, would severely harm local business competition, and might well have the unintended effect of reducing local employment opportunities.”