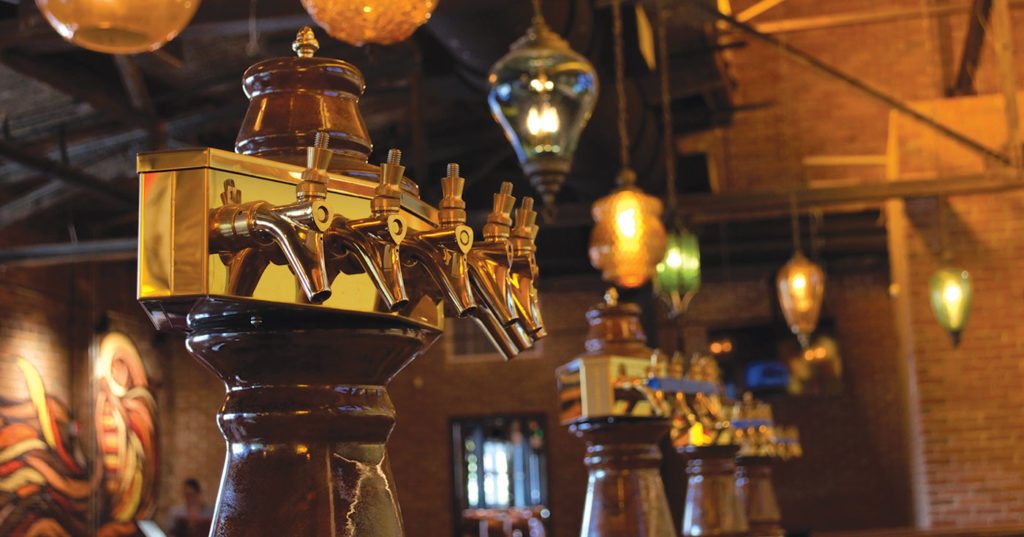 The popularity of craft beer is a trend that continues to skyrocket. At the end of 2015, Kentucky ranked only 38th in the U.S. in number of breweries, but the economic impact of craft beer in the state was $495 million, good for 27th nationwide, according to the Brewers Association.

Louisville has more than a dozen breweries, with more set to open. We also have World of Beer with 50 taps and some 500 bottles, two Craft House locations focusing on regional craft beer, and the well-established Sergio’s World Beers, which carries in the neighborhood of 1,500 bottled and draft beers at any given time.

Enter HopCat, the growing, Michigan-based chain set to open its latest location, at 1064 Bardstown Road  in The Highlands, this Saturday. The restaurant-bar will pour from 132 different taps, with a focus on American craft beer and a few ciders and imports. It advertises itself as having “the state’s largest selection of craft beers on tap.”

But lest anyone worry that Louisville’s breweries might be muscled out by this out-of-state super bar, HopCat is quick to show its good faith as a neighbor wherever it lands, it seems.

To that end, the small, but growing, chain will allot many of its taps to local beers. It will feature a “Local 20” that will be offered to visitors who might be new to craft beer, or who aren’t sure what they want to try. Those beers will be on tap permanently, and they will be the first products offered up as samples.

Chris Knape, vice president of marketing and communications for BarFly Ventures, which is HopCat’s parent company, said it won’t stop at 20 local taps, however, as seasonal and special brews will be added whenever available. The bar and restaurant — which is well known for its Crack Fries, as well as its beer selection — even has an on-site, two-and-a-half barrel brewing system it will use, in part, to do collaboration brews with local breweries.

What’s more, bartenders at HopCat locations are taught to encourage people to visit the places where the beers are brewed. Many of them, such as Great Flood, Akasha, Apocalypse, Cumberland and (soon enough) Mile Wide, will be just down the street.

“We want people to go out and experience those breweries,” Knape said. “That’s the cool thing about HopCat, for those people trying to get an overview of the scene. We want to be a hub. We also want to be the best customer for all those breweries.”

John King is executive director of the Kentucky Guild of Brewers and has spent time exploring HopCat’s business model, as well as its Lexington location. He believes HopCat will be a positive addition to the craft beer scene here because of this local focus.

“HopCat is very local-centric,” King said. “A good portion of their taps will be Kentucky-made beer. That’s great, because brewers are getting taps in more places. It’s good, especially in The Highlands, to have one large place to get Kentucky-made beer.”

Meanwhile, HopCat will offer Kentucky brewery tap takeovers and beer dinners to further promote the breweries. They will work with brewers to select appropriate glassware for serving their beer, and they will make sure glasses are rinsed before serving. HopCat staff — the bar and restaurant said it would create roughly 200 jobs — also is well trained in beer styles, brands and other details that craft beer enthusiasts might throw at them.

“We take a lot of care,” Knape said. “We treat beer like a really good wine-bar would treat wine. We want it to be approachable, but want to respect the brewers that made it.”

If there is a concern, King said, it might be the difficulty of managing so many lines, making sure they stay clean and that the beer is fresh. If someone orders a local beer, and it has off flavors, it could sour that person on that brewery and its products. That’s where the commitment to quality becomes crucial, and Knape said HopCat has a beer manager, Chase Myers, whose full-time job essentially is to make sure the beer stays fresh and the lines stay clean.

HopCat has King convinced, assuming the area can handle the influx of people.

“I think it will do well,” King said. “This is not HopCat’s first rodeo; they know what they’re doing. I think HopCat is going to be awesome.” •

Gibson is author of the book, “Louisville Beer: Derby City History on Draft.”