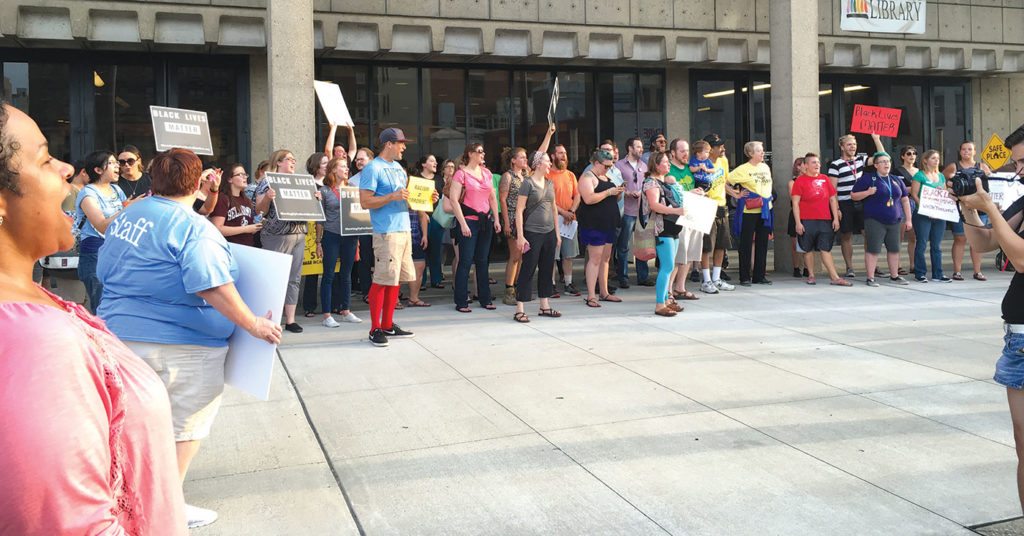 Showing Up for Racial Justice, SURJ, at the downtown library. Photo by Anna Rohleder

More than 200 people crowded into a basement meeting room of the main library downtown one evening last week to talk about police brutality and other inequalities in the African-American community, and what they could do about it.

All but a few of them were white.

A show of hands revealed it was the first time for the majority at the meeting of LSURJ, the Louisville chapter of Showing Up for Racial Justice. SURJ is a national organization aimed at organizing white people in support of the Black Lives Matter movement. One handout explained why white people must organize other white people. “White people individually and as a group, through our silence or collusion, inaction or action, are the main supporters of White Supremacy,” it said.

Carla Wallace, a local and national SURJ leader, explained how the group came about. “Remember back when [President] Obama was elected — there was a lot of talk about a post-racial society. Did it happen?” Instead, she said, “there was a tremendous racist backlash” including controversies over the president’s birth certificate.

But it is the latest wave of police shootings, along with the rise of GOP presidential candidate Donald Trump, that brought white people of many ages, social classes, gender orientations and faiths, to stand three rows deep that night.

(There was a brief kerfuffle when several men, wearing fatigue-style clothing and holstered guns, appeared. One wore a T-shirt saying, “Fuck Your Gun-Free Zone.” They did not speak publicly during the meeting.)

Participants were asked to write down on notecards, and to also talk with others there, about why they were showing up for racial justice. Some said it was because of the inequalities they’ve observed. Others saw parallels between Black Lives Matter and discrimination they faced for being different in some way themselves. “I’m so very motivated because my world got rocked the night of the Orlando shootings,” said one participant during the public share-out. Attendees approached for this story declined to be identified for comment, saying they felt uncomfortable making a public statement.

“The reason we spend so much time on why people are showing up is that they need to be rooted in that to do this work for the long haul,” said Carol Kraemer, an LSURJ leader. “Our work in LSURJ is to follow up with these folks and get them involved beyond coming to a meeting.”

To that end, Wallace outlined projects for new members, including making public art, joining a study group on the jail system and helping in a “deep-canvassing” pilot project in Louisville and other cities, essentially a listening tour of white neighborhoods.

More immediately, participants were encouraged to join a march with Black Lives Matter leaders after the meeting. “Too many white people are silent and unsure about what to do in the face of racial injustice,” she said. “This is your chance to come out.”

The meeting was followed by other BLM-related events over the weekend, including a rally and petition drive in The Highlands