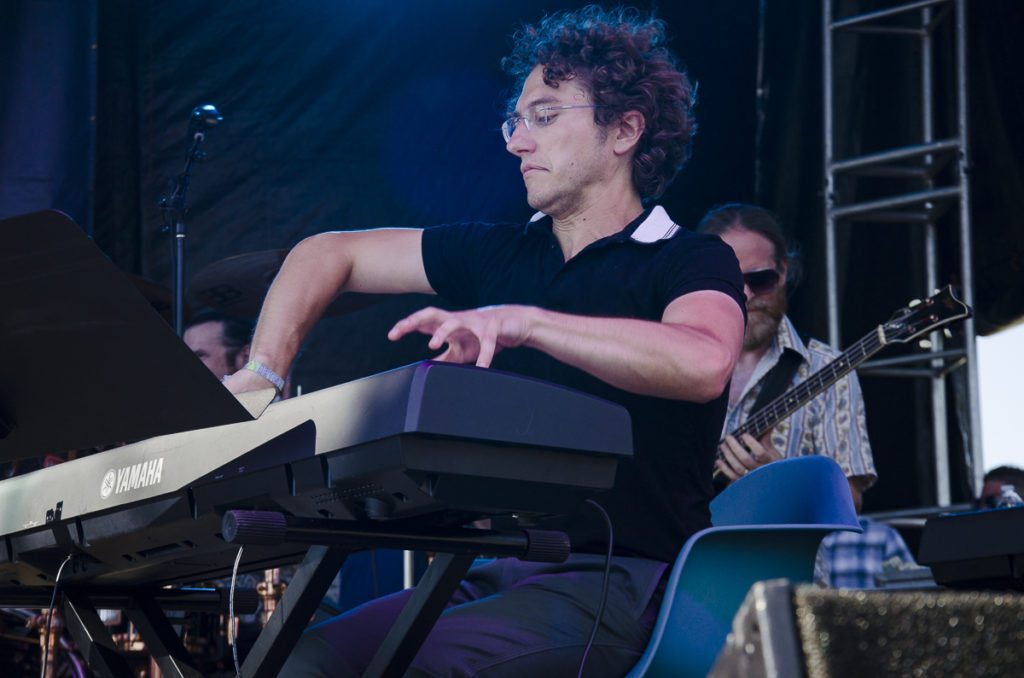 1) I’m glad Forecastle brought back the *insert-local-musical-mastermind-who-can-organize-a-full-hour-of-an-ever-changing-supergroup* portion of the festival. Last year, it was Dr. Dundiff & Friends, which paired the hip-hop producer with 1200, JaLin Roze, Jim James, Shadowpact and a bunch of other great rappers. This year, it was Teddy Abrams and Friends, which placed the Louisville Orchestra conductor — and a group he calls “The Forecastle Symphony” — with a wide range of performers that ran all over the spectrum in a short amount of time, keeping the set interesting and unpredictable. Joan Shelly, Tyrone Cotton, Wax Fang and Sarah Jarosz swung by, Houndmouth’s Matt Myers sang “Darkness on the Edge of Town” and James Lindsay and Jecorey Arthur did a song as 1200 Rozes.

2) Hip-hop’s generally not an easy genre to translate from the studio to the stage, but Danny Brown’s whirlwind of high-energy rap that’s loaded with a bunch of striking layers doesn’t fall under the category of general. His bass-heavy beats still have clean samples and parts that swirl and add depth. The second emcee onstage peppered in, barking backing vocals and a few verses to complement Brown’s rhythmic, high-pitched, loose-cannon delivery.

3) Playing hard-driven psych-rock in the vein of Queens of the Stone Age (with small edges of Sabbath-like sludge), All Them Witches are a band built to play at a festival, with chugging guitars, a powerful rhythm section and chilly vocals.

Lara: Day Two of Forecastle had long been underway, but the most exciting set happened at 5:15 p.m. at the Port Stage. Mayor Greg Fischer introduced the group with the graciousness of some historical event about to take place, and he was correct — Teddy Abrams’s new collective, the Forecastle Symphony, was about to take the stage.

The Forecastle Symphony brought together Louisville’s music landscape, like some sort of fusion supergroup that could show outsiders what Louisville really has going on. (My buddy Martin Kasdan has a great interview in LEO with Abrams that details the philosophy of this collective project.) So, I was sold before even hearing the group. I think choosing to play an aggressive “Caravan” for the first song is what really sealed their status as a band. What a move to set the tone of their determination, understanding the ambition of this project and the roles each other holds to vitalize a new, exciting sound, while introducing themselves with a really old song. How dangerous.

There were a lot of people onstage, definitely more than a dozen. Teddy conducted from a keyboard set sideways on center stage, with the large ensemble forming behind him. Each song was a spotlight on individual members of the group — Tyrone Cotton sang a nice piano soul-ballad; fiddle player Mike Cleveland of the Louisville Orchestra went nuts with what basically was a long solo, plus a four-second melody; Scott Carney had a turn with support from his ex-Wax Fang bandmate Kevin Ratterman on drums; although not from Louisville, Sara Jarosz guested with one of her songs; Carly Johnson took us to church; and Abrams commemorated Muhammad Ali with an original, “Float, Rumble, Rest,” a sweet, soul-fusion explosion.

It would require, at least, a two-and-a-half hour set to truly showcase the talent of every single member in the group (I have this theory that there were more members hiding backstage who just never came out). But I know for sure, the Forecastle Symphony must continue as a revolving collective.

Anna: My group and I had been looking forward to seeing Andrew McMahon in the Wilderness. I only really knew a handful of his songs, but he put on such a good show, that it didn’t matter. And, before his last song, he pulled out a parachute and threw it over the audience. Something about wanting to make a moment for all of us to remember, and let me tell you: We will. I somehow managed to get under said parachute, and, while it was quite warm and my toe got squished a few times, it was pretty cool. I don’t really know how to describe it without sounding like a bozo, but it was a good time. Andrew actually came out into the crowd, and my friend grabbed his ear. It was great. The Day Two headliner, Alabama Shakes, are a band that I just recently got into. After seeing them at Bonnaroo last year, I was hooked. They put on an amazing show, and I’m sure anyone who has seen them live would agree. So, if I go missing for a few days, don’t worry, I’m just stalking Brittany Howard.