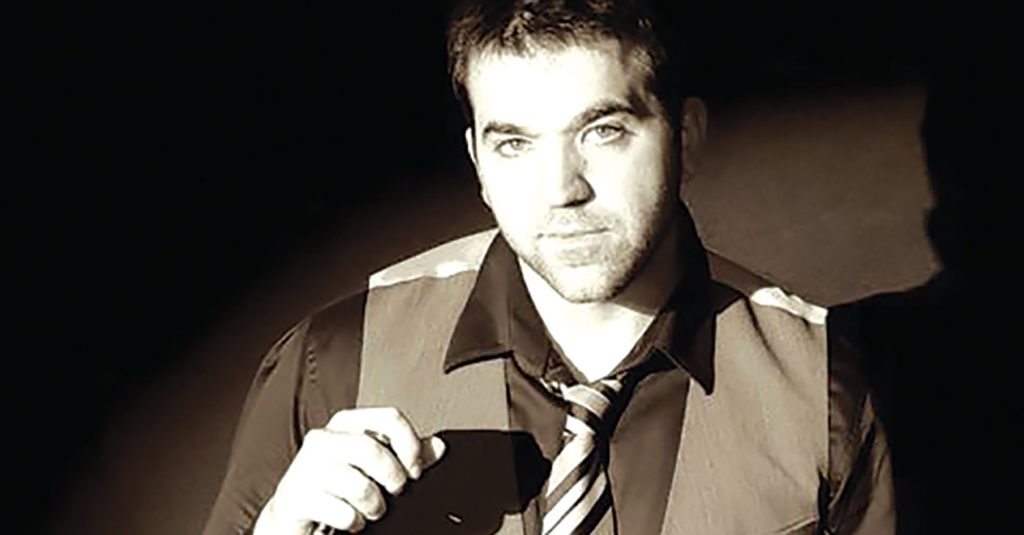 Self-described as “Martin and Lewis, with a little dash of Sinatra and Sammy Davis Jr. mixed in,” Spencer James presents comedy like you probably have never seen. Trained in theater, he incorporates every aspect of live performance into his stand-up. And that’s not to say that he is more flash than substance — his acerbic sense of humor delves into some of the darker corners of the human experience. He says he was a self-conscious “Army brat,” having lived in Italy, Germany and Colorado during his childhood, and then settling in Denver as an adult. This weekend will be the first time he brings his unhinged brand of comedy to Louisville, appearing at Gallery K.

LEO: Do you think all the moving around as a kid might be what led you to being a comedian?

Spencer James: I think so. But comedians are notoriously awkward people, and, for me, that wasn’t an option as a kid. So I think it allowed me to do comedy in terms of — that’s why traveling around the country by myself isn’t a big thing, or having to constantly talk and meet strangers doesn’t bother me. That kind of was my childhood.

So you were good at making friends?

I was until sixth grade. That’s when I became obese. I was a fat kid. I didn’t really have any friends again until sophomore year, when we moved. I also wasn’t fat anymore.

Being overweight as a child seems to continue to deeply affect you.

Oh, of course. That never goes away. For me, at least, it doesn’t.

Do you think the moving around so much, or your childhood obesity, drove you to want to be in a people-pleasing profession?

The anxiety of staying in one place, while being a fat kid, was my real problem. The moving did help me when it came to being a comedian. But the desire for acceptance from strangers is probably from being the middle-child in my family. This got deep. I’m learning a lot about myself.

Coming from a background of insecurities, what made you want to go on a stage and perform?

Well, I always kind of sang and danced, when I was a kid, for family and friends and stuff. I did theater when I went to college. But I didn’t do stand-up until I was about 22, and a casting director recommended it, and I was immediately hooked.

Were you aware of comedy at all before that?

It was a whole new world to me, but I relied on a lot of things I had done before, like improv. I would go on-stage and riff on the crowd, Don Rickles-style. Then, I eventually learned how to write and to find the proper balance between talking to the audience and doing your performance.

What was your worst road gig?

Oh, the list. A woman booked me for her bar, and it ended up just being her, her daughter [and] her daughter’s boyfriend. Then, the ceiling was too low because I’m 6 [feet] 3 [inches], and there was a chihuahua circling my feet. Once I did a show where the audience was divided by a wall. The stage was setup in the door frame, so I had to play to two different audiences at the same time. One time they gave me a microphone that had a two-foot cord, so they had to set the P.A. on a table on the stage, and I couldn’t move.

When someone asks who influenced you the most, does your mind go to comedians or music and theater, first?

You are the first person to ever ask me that. I’m not kidding. Usually they ask specifically stand-up related. Because every time as I’m hearing the usual question ‘What stand-up comics influenced you?’ my mind immediately starts thinking: ‘I wasn’t influenced by comedy. I was influenced by Michael Jackson. It was Usher. It was a lot of actors.’ I watched a lot of C.M.T. and the Oscars with my parents. Garth Brooks. I loved watching live performance, watching things that were just very well-done. Stand-up didn’t really even register. And then I did it, and I was like: Oh man, this is a lot harder than the other stuff. With those, you rely on other people. With this, it’s just you. So I started watching a lot of comedy then, mostly Eddie Murphy’s ‘Delirious’ and ‘Raw.’ I took bits and pieces from everybody, though. Right now I love Bill Burr, like everyone else. His ability to be vulnerable on-stage is amazing.