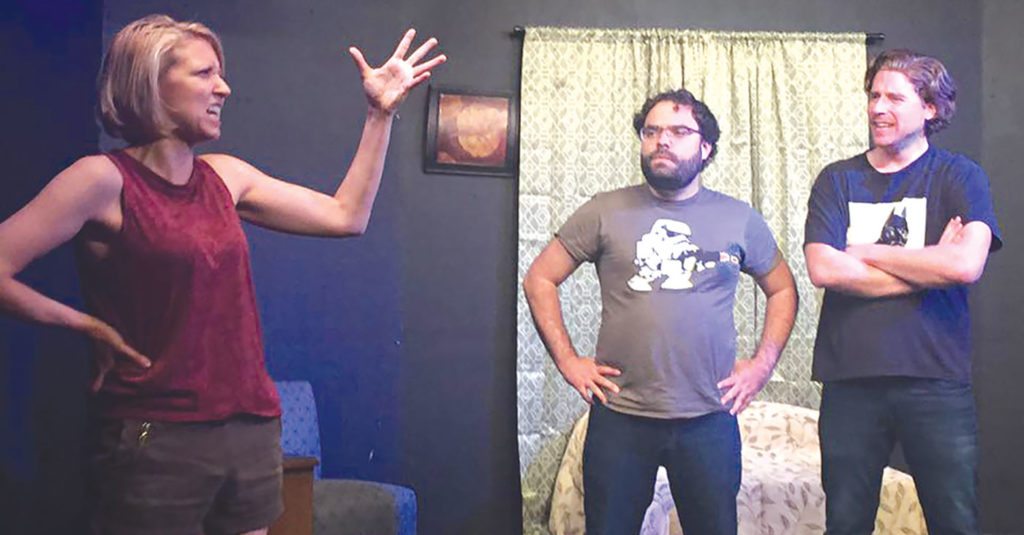 Let me count just a few of the ways in which the First Annual Derby City Playwrights New Play Festival is impressive: six full-length, world-premiere plays by seven Louisville playwrights, each in repertory over three weekends on a single stage; six directors; 31 cast members; and another 10 or so technical and administrative folks.

It’s hard to comprehend the logistical and staffing challenges involved in mounting a festival like this — especially given that the Derby City Playwrights is a collective whose enormous passion for this project is inversely proportionate to the size of its financial resources and organizational infrastructure.

Last week, after seeing half of the bill, I wrote that the Festival represents a watershed moment in the history of Louisville theater.

After seeing the rest of the plays, I’m still convinced. Time will tell whether, and how, this group will evolve. But as I sat in the smallish, packed theater at The Bard’s Town, I was reminded that the history of resident, professional theater companies in Louisville dates back only about 50 years.

And how times have changed: Louisville Theatre, which eventually merged with Actors Inc. to become Actors Theatre of Louisville, started life with a board headed up by Barry Bingham Jr., celebrity board members including Sir John Gielgud, and a fund-raising campaign with a target of $150,000.

The Derby City Playwrights doesn’t have a celebrity board — and it’s a pretty safe guess that it operates on a thrift-store budget. But it has six remarkable productions running through next week.

A few general observations about the Festival: All six plays are based on intriguing premises and richly imagined characters. The storytelling is rigorously consistent with the fictional worlds the plays inhabit. The direction is deft, and the casting is extraordinary: The 31 performances range from solid to brilliant. And, though the productions are wildly different in topic and tone, each one is a performer’s delight, with ample scope for ensemble and individual excellence (in fact, one of the elements common to all the productions is the presence of at least one outstanding monologue).

Now to this week’s specifics.

I have mixed feelings about Ben Unwin’s “@con,” directed by Martin French. I admire the script’s ambitious scope and adventurous ideas — but it’s an unruly tangle of a story that cries out for some editorial unraveling. Set at a hacker convention in Las Vegas, where featureless hotel rooms serve as a metaphor for the anonymous domains of the internet, it plunges us into a world where paranoia is a guiding principle — and even the word “con” has multiple meanings.

The script is an uncompromising work of techno-fiction packed with geek lexicon and the kind of misogynistic, racist hate-speech that characterizes many online chat rooms. And the concept is a brilliant exploration of the malleable nature of identity, both in the online world and in the physical world, where the personhood of a transsexual hacker named Gaz (April Singer) relies on stolen medications — until it turns out that a major corporation has developed a horrific bio-hack. There are fine performances from Megan Adair, as Gaz’s comrade in crime; Ryan Watson, as a jittery hacker; Neill Brewer, as Gaz’s one-time love interest, now nemesis; and Scott Goodman and Chris Petty, as the comically-revolting personification of the worst internet trolls.

“The Brownstone,” by Rachel White, directed by Tad Chitwood, offers a different take on the instability of identity. Here the setting is an abandoned building where three squatters are carving out a spare existence. Bo (Corey Long) is a shattered, vulnerable man with an artistic bent and a deep desire to turn the decrepit space into a home. He’s recently taken in the fetching, mysterious, mercurial Bunny (Maren Schikler) and a grandiloquent poet, named Elliott (Tony Pike), with a knack for dumpster diving. It’s a classic triangle — until a Cop with an unclear interest (Corey Music) arrives on the scene. This is terrific storytelling — and like all the productions in the Festival, it’s a showcase for the performers, especially Pike, who delivers a superbly-written monologue with easy virtuosity.

“The Bus Stop at Sycamore and Vine” by Eli Keel and Tyler Curth, directed by Joe Hatfield, is set in a neighborhood so small that young people have only two places to gather, the titular bus stop and the Thornton’s gas-station parking lot. Among those who frequent the stop are a couple of siblings, Trent (Connor Breen) a lanky, dope-smoking, apparently good-natured fellow with enough muscle to protect his younger bookish younger brother, Taylor (Alex Haydon), from the homophobic taunts and bullying of kids, like Doug (Patrick Taft). Amanda (Zoe Peterson) is a teenager with artistic tendencies and a knack for irony. And there is forceful, determined Alyssa (Alexis Seay).

Though all of the youngsters make noises about wanting to escape their constraints, Alyssa is the only one who understands that the bus stop offers a way out. Others follow different paths: drugs for Trent, drawing for Amana and literature for Taylor. And for Doug, the only release is a periodic assault on the “fag,” Taylor.

I don’t want to disclose much of the plot, but from these five characters, Keel (a LEO contributor) and Curth develop an archetypal story about the intersections of love and fear. It’s a story that demands — and receives — extraordinary performances.

Six plays are in repertoire throughout, one performance of each play each weekend. (Shows are selling out, so make a reservation, and if you have a season pass, you need to make reservations for specific performances.)