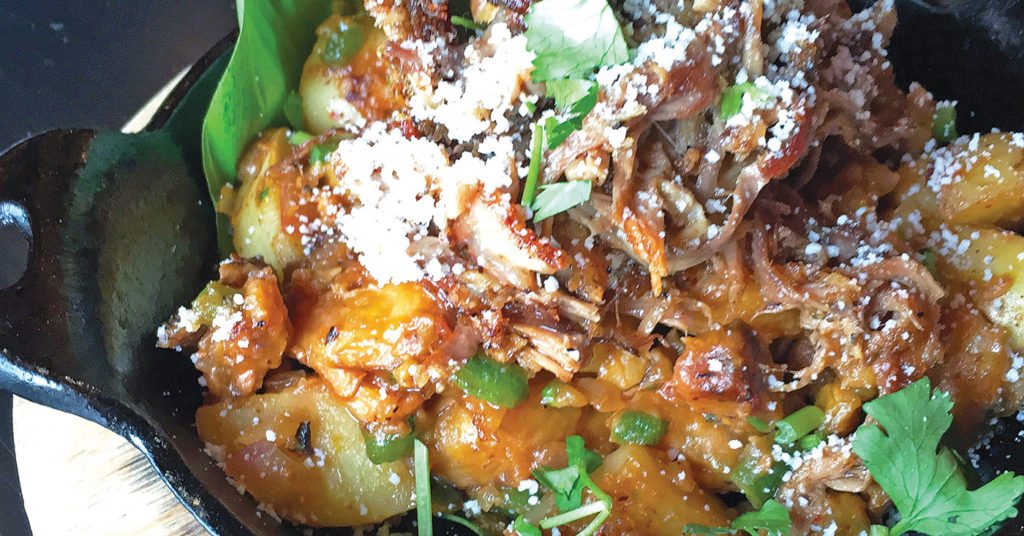 Why, why, why did nobody tell me that I needed to go to Migo, until now?

Look: This place, a partner in the triumvirate of Hammerheads, Game and, now, Migo, has been open since mid-October. In other words, I’ve been missing out on some of the best, most creative and delicious tacos and more in town for eight months!

I’m not just ranting about any old taqueria, either. Consider this: When our friend, Peggy, mentioned that her daughter, Patricia, was at 610 Magnolia, we suddenly realized with delight that we were eating just as well.

Yes, Migo is that good.

Maybe its small rooms aren’t long on atmosphere, but they are comfortable, and decked out with striking outsider-art murals. Service is neither diner casual nor high-end smarmy, but friendly and prompt.

But the food? Ach, mein gott, the food! I was blown away by both its imaginativeness, and the skill in its execution.

The chef dropped by for a brief table-side visit. I didn’t catch his name, perhaps because I didn’t throw mine, but he impressed us with his sheer passion when we asked how he could make beef tongue taste so good, and he gave us all the details, hoping we’d try it ourselves at home. His cooking reflects his passion, and that’s why I would seriously rank Migo’s food with such top-ranked eateries as 610 and Seviche, A Latin Restaurant.

Migo’s menu spreads across the Latino world and beyond, and it is so modest in price that there’s only one item over $9, and that — succulent mussels in an incredible ginger-citrus-lobster broth — only gently cracks double digits at $11.

You can have your tacos Mexican style, sure, or choose Baja, Korean, Hawaiian or with BBQ fixin’s. Ponder Mexican chilaquiles ($9), Puerto Rican mofongo ($9), Cuban yuca tots ($7) and Jamaican jerk plantain tacos ($5), not to mention Buffalo-style cauliflower in a taco ($5).

Chorizo tacos ($6), and chorizo meatballs ($9), are made with Wagyu beef; Tacos (all $5 to $7) come with choices of seven kinds of meat, six species of seafood or fish, or you can choose from seven amazing vegetarian tacos. A dozen small plates, carnivorous and meat-free, are $7 to $11.

Migo’s cozy S-shaped bar offers beverages as creative, and well-chosen, as is the food. Mary and I couldn’t resist mojitos ($8), tall, icy, sweet and deliciously minty. Peggy gave thumps up to a delicious  scarlet, pomegranate-scented sangria ($7).

The meat dishes amazed us. That beef tongue the chef raved about was stuffed into a house-made corn tortilla, made Mexican-style with green salsa, cilantro, earthy cotija cheese and a silken tomatillo-lemon aioli. Sliced into two generous planks, it was so soft you could cut it with a spoon; dark and dense, seared on the edges and sizzling straight from a skillet. (Chef told us it had been cooked, tightly covered, for four hours at a very low and slow 225 degrees, and then sliced and seared for serving.) “The skin just comes right off,” he disclosed, clearly assuming that a table willing to eat tongue wasn’t wary of the details.

Mofongo ($9) is a classic Puerto Rican pork-and-plantain dish. Slices of browned plantain and slices of potato made a bed for a mound of pig meat that was just as good as the beef tongue. It had been roasted, shredded and seared, yielding succulent pork with soft, juicy meat rimmed by a caramelized crunch in every bite.

Short rib chilaquiles continued the meaty symphony. Succulent, tender beef shreds, apparently handled similarly to the pork, were spread over house-made corn tortilla chips, with a reddish, spicy sauce and cotija cheese, in a dish akin to nachos with a college education.

Switching over to catfish, a Baja-style taco ($5) was loaded with two big chunks of white fish, with a fresh, clean flavor, no bottom-feeder mud in sight. A fine cornmeal breading was crisp and hot, and not at all greasy, and avocado, cheese, aioli, pickled slaw and cilantro put a trophy in its waiting hands.

The veggie dishes were every bit as good as the turf-and-surf. A five-way corn tamale ($8) was built on a round of masa corn dough, loaded with grilled corn niblets, earthy hominy and giant Peruvian coclo corn kernels, blanketed in a seductive goat-cheese corn cream.

Elote ($4), the Mexico City street treat, was as good as it gets: Yellow corn on the cob, halved lengthwise, grilled in a coat of mayo, cotija and hot chile pepper.

A crispy tomatillo taco ($5) was a stroke of culinary genius. Chunks of tangy green tomatillo were cloaked in glass-crisp, tempura-style coating. Dressed with that tomatillo-lemon aioli, green salsa, cilantro and cotija, it was amazing. Give me four more, please!

Mexican sour-cream cake ($6) was crumbly and short, with avocado icing, topped with a ball of cool, sweet yet surprisingly fiery jalapeño ice cream.

Delivered with quiet flair by our excellent server, Darlane, this abundant meal totaled $65.82, plus a $15 tip.